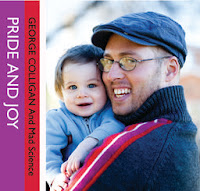 I've had this band called Mad Science for over a decade. We've been kind of on hiatus for a while; not by choice, mind you. Mad Science is a little odd in that it's an organ trio that plays fusion jazz. It's a little too jazzy for rock clubs and too rockish for the jazz clubs. We've had a few nice hits over the years; we did a nice run at Pizza Express in London and a nice gig at the Rochester Jazz Festival. We did three albums, the latest is called "Pride And Joy" and it's on Piloo Records. I've always been really proud of the band, and I still think there is a place for it somewhere out there.

The band has gone through a few inceptions, but it's always included guitarist Tom Guarna. Our last gigs in New York featured the wonderfully talented Kenny Grohowski on drums. Recently, Guarna visited Portland, and I used that visit as an opportunity to do a Mad Science West gig. But instead of organ, we decided to make it a quartet. We enlisted Damian Erskine on bass and Reinhard Melz on drums. Erskine and Melz are Portland residents, but they sure play on a world class level. At the one rehearsal we had scheduled, they knew the music better than I did!

We played at a local venue in Portland and in my view, it was mostly a success. The music was off the chain without a doubt. Guarna was on fire, and Melz tore into the music with gusto. Erskine laid down the bass, which freed me up to do some different things(since normally, I would have been playing left hand organ bass). I'm hoping to do another performance very soon. It won't be at the previous venue, due to the fact that said venue, after leaving us off of their email listing, blamed us for what they called a turn out which was "not what they had hoped for." Well, it happens.(I wonder if they actually had heard the performance if they would have been so focused on the business. For some, I suppose money is louder than music.)

But you can judge for yourself, because the gig was recorded on Audio and Video, and I have links! Again, this is a really cool project and I think it has potential. It's funky, energetic, and artistic. We're working on another double bill with Mike Prigodich's band for the fall. Enjoy these videos and stay tuned!