Hammond B-3 organ is kind of a thing unto itself. It's not just an instrument, it's a lifestyle. You could take that literally when you consider that, whether you play a "clonewheel" ( meaning a digital keyboard which is designed to emulate the B-3 sound) or an actual B-3, C-3, or what have you Hammond organ, you need at the very minimum a car, or maybe a van, a storage space, and perhaps 3 friends to help you carry the organ into the club
( hopefully not up the stairs!). Don't forget about the Leslie speaker! I have always considered myself a dabbler in the B-3 lifestyle( I've recorded and toured as an "organist" but I'm not anyone's first call...also didn't have three friends to help with the lifting....ha ha). It seems as though older generations delineate clearly who is a pianist and who is an organist( meaning you won't see McCoy Tyner playing organ, or Jimmy Smith playing piano....not that I'm aware of....at least not frequently.....). Among the younger generation, you have the dyed in the wool organists like Joey DeFrancesco, Cory Henry, Pat Bianchi, Jared Gold, and then you have the guys who went from piano to organ, like Larry Goldings, Gary Versace, Mike LeDonne (and I guess yours truly.....come on Downbeat give me a chance......).

Then you have Brian Charette. After reading Charette's bio, I see that he has a classical piano background. I am familiar with some of his writing in Keyboard magazine on the harmonic techniques of Olivier Messian.  Charette could be put in the latter category of pianists turned organists; however, after listening to his latest release on Positone, " Alphabet City," he has convinced me that organ is his true calling. He's so convincing on the instrument; the bass lines, the groove/hookup with drumming wiz Rudy Royston, the fluidity of his right hand, the cool drawbar settings he uses for "comping" for guitarist Will Bernard's solos- all of these things for me put him in the solid " organist's organist" category. 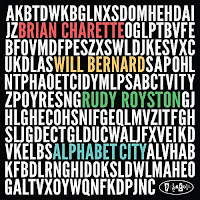 "Alphabet City" has something for every jazz fan: clever, brainy up tempo burners( "East Village"), funky jams( "They Left Fred Out"), medium tempo groovers( "West Village"), psychedelic fusion experiences( "Not A Purist"), soulful second line sermons( "Sharpie Moustache"), music for driving on the highway( "Disco Nap"), music for haunted houses("Hungarian Minor"), music for 70's TV shows("Avenue A"), and so much more. This is not " Back At The Chicken Shack" by any means, and yet Charette, even with the weird sounding smattering of synths and variety of moods, convinces me that the Hammond B-3 is his voice, and he's taking it out of the box and bringing it into the 21st century. Essentially, Brian Charette's "Alphabet City" is the type of  record I wish I could make!

Catch Brian Charette at the Jazz Standard on October 13.