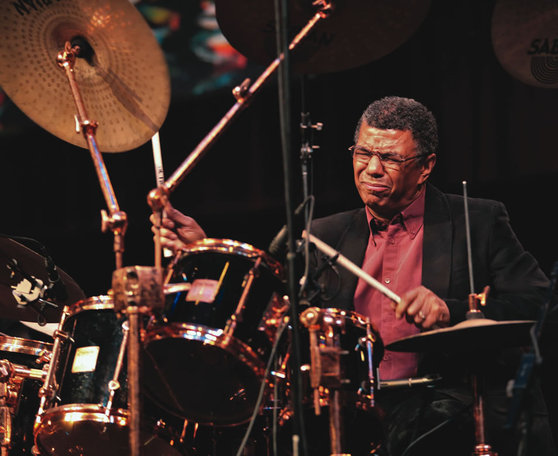 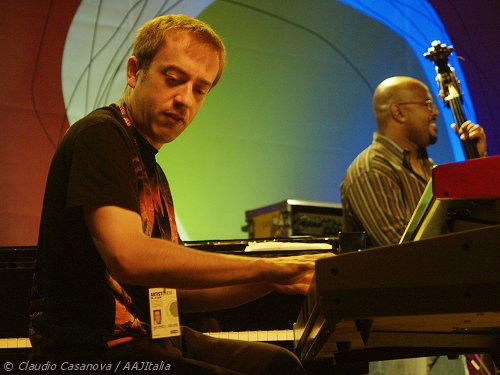 I just arrived back in Portland after an extended weekend run up to Seattle. I combined an invitation to perform at the Ballard Jazz Festival with a Portland State University Jazz Program recruiting trip. I've been looking for opportunities to bring our Persian Jazz Collective(members are Nicole Glover on tenor saxophone, Jon Lakey on bass, Monica Rabii on santur and violin, and percussionists Mario Sandoval and Trina Shagafi) out to perform my "Persian Jazz Suite" and give folks a chance to see this group before Monica Rabii moves to Denmark! Plus, we are trying to raise awareness of our program beyond Oregon and hopefully in the years to come we will become more of a destination for out of state students. We began our journey in Chehalis, Washington at WF West High School. Band director Adam Campagna put us in a nice little theater to perform for his music students. It was a good warm up gig for our group; although we had not had a chance to rehearse before the tour, I asked the musicians to have their music memorized. (Of course, then I realize that I would have to find time to practice the music in order to memorize it myself and set a good example...)

Our next two performances were the next day in Edmonds, a suburb a bit north of Seattle. We hit at Mountlake Terrace High School at 7:20 am( there was actually a class before us at 6:20! Wow!). Although we were all a bit drowsy, we had a good show and an attentive audience. Band Director Darin Faul mentioned that violinist Mark O'Conner attended Mountlake Terrace, so there is clearly some good history there. After a stop at the local IHOP( no carbs for me, I had an omelette), we then went over to Edmonds-Woodway; Director Jake Bergevin heartily welcomed us into a lovely theater for our third run of our show.

Later that evening, we headed into the Ballard section of Seattle to Egan's Ballard Jam House for our

final performance with the Persian Group. It's a small venue, but festival directors Matt Jorgensen and John Bishop really got the word out about the festival. It was nice to play for a packed house, and I'm assuming that no one there had ever heard any "Persian Jazz" before! I'm confident that it was also a great performing experience for my students. After another short break, we did two sets of "regular jazz" with Nicole Glover, Jon Lakey, and drummer Matt Jorgensen. After such a long day, it was time to sleep, but instead, I went down to hear Chad McCullough's band with an all Chicago line up of Geoff Bradfield on tenor, Clark Sommers on bass, and Dana Hall on drums. I ended up buying Hall's latest release( on the Origin label) "Into The Light;" It was nice to have something awesome to listen to on my drive back to the hotel in Edmonds.

The last night of the festival was a momentous occasion; alto great Sonny Fortune and Flamenco jazz piano legend Chano Dominguez on a double bill. I had met Dominguez in Spain many years ago and he's a really great guy and a wonderful musician; his unique piano style is as if Bill Evans was from Andalucia( the southern region of Spain where flamenco has it's origins). Joining Dominguez on the concert was Marino Albero, who began her segment of the set with a haunting solo on hammer dulcimer; after that, she played vibraphone with Dominguez with incredible sympatico. I was truly inspired after hearing them play, and it gave me energy to play with Sonny Fortune. I certainly needed it, because even at age 74, Fortune was not messing around! I noticed that most of the real Philly musicians that I've been fortunate to play with have a certain intensity about how they approach the bandstand. It's a very no-nonsense way to play, and you have to be ready to lay it down. I was happy to have bassist Jeff Johnson and drummer John Bishop in the rhythm section; they both have a lot of musical wisdom as well as supportive drive. It turned out to be a great combination. I felt like I got a little taste of East Coast jazz for a change. Overall, it was a great mini tour and I look forward to next year's Ballard festival.
No comments:

This year was my second time as an adjudicator at the Reno Jazz Festival. Running for over 50 years, this festival is one of the biggest student jazz competitions in the U.S. Over 300 groups from middle school, high school, and college compete and are coached by jazz educators and professionals. This year, like last year, was a great experience for me; I got to hear many high school and college musicians and give them my perspective on how to improve. I also got to see some old friends as well and meet some new ones; I also got to play a bit with some musicians I had never played with before. One of my alternate goals of being a part of a festival like this is recruiting; I tried to make sure that the prospective jazz students I met were aware that Portland State University is an option for them for Bachelor's or Master's. There are so many options for studying jazz, however, I think a lot of folks are curious about Portland as a city and whether it has a jazz scene and opportunity to study. ( I keep hearing that half a million people will move to Portland in the next 5 years. I guess we shall see.)

I got to hear some good music also; I heard a concert which began with The Collective, which is
actually the faculty ensemble of the University of Nevada in Reno( which is where the festival is held). Trumpet phenomenon Avishai Cohen joined them and blew the roof off the concert hall; it's amazing to hear Cohen's fluid lines, beautiful sound, and endless ideas. I also got to hear jazz super group Kneebody in a huge auditorium( it felt more like a rock concert than a jazz performance). Kneebody is a very special group; they've been together for over a decade, and it shows in how in sync they are as a band.

After listening to student bands for two days straight, it was fun to actually participate. I played as a sideman for two concerts; one was with UNR graduate Brian Landrus, who is a talented baritone saxophonist and composer. The second concert was with Clay Jenkins, a really great trumpeter who has played with many of the greats and now teaches at Eastman School of Music. Both concerts featured drummer Mark Ferber, who is one of my all time favorite musicians with whom to collaborate. Ferber and I just seem to really communicate well musically. I hope I can play with him more in the future. Another highlight of the festival is the Friday Late Night Adjudicator Jam Session. It's held in a bar in the middle of the Circus Circus Casino, which is not optimal; however, despite the less than desirable acoustics, it's still a lot of fun, and all of the educators and musicians come out to play a bit.


I really do enjoy working with the small groups. I think I am better at working with them then last year. It's always a bit rushed, but I have improved my bedside manner and getting to the heart of the matter. As Larry Engstrom, the Director of the UNR School Of The Arts and the Director of the Festival likes to say, rather insist, at the welcome meeting, "Be Postive!" Truthfully, none of these kids, some of whom drive for half a day to get to Reno, want to perform their hearts out only to be ripped apart. Constructive criticism is the name of the game. I got the impression that it was a positive experience for most of the kids I worked with. That is not to say that I sugar coat anything. (Like I say to my students at PSU, "If I'm not telling you something, you aren't getting your money's worth!")

Congratulations to Dr. Engstrom and Peter Epstein for another great festival. Maybe I'll see you next year!