Back in New York! Helen Sung Quartet and more Shameful Self Promotion

Hey there, Jazz Fans! I'm back in New York for the summer! Yes, I'm in the true Jazz Capital of the World. Well, I will admit that the scene has changed a lot since I first moved here in 1995. I think New York is tougher than ever, in terms of musicians to make a living. However, the sheer number of amazing performances and performers you can hear on any given night is truly staggering. From the legendary Blue Note in Manhattan to tiny hole-in-the -wall clubs in Brooklyn, there is amazing music to be heard. If you are any kind of a serious jazz fan, you need to come to New York at least once a year.

Since I hadn't been in the Apple since December, I decided to go down to Greenwich Village and hear the Helen Sung Quartet at the famous 55 Bar. Sung is a wonderful jazz pianist who has recently decided to go down a more "electric" avenue ( sorry, Eddie Grant...) in her sound. She's played with Lonnie Plaxico and Richie Goods as a side person; I believe that these two gigs influenced her tremendously. A graduate of the Theolonious Monk Institute of Jazz Performance, Sung has plenty of chops and she's also a prolific composer. She and her band performed some poetry-inspired music which had fusion undertones(Sung played Fender Rhodes electric piano the entire evening), as well as jazz-rock standards like Weather Report's classic "Black Market." She also presented some cool arrangements of the Monk tunes "Eronel" and "Epistrophy."

I was very familiar with her sidemen, since I had worked with all of them extensively. Sometimes it's more fun to be a listening bystander than a performing participant. I enjoyed listening to guitarist Tom Guarna greatly, and I was sitting right in front of his amp (which wasn't cranked to 11, if you care to know). Guarna is becoming know for his tasty use of effects. I hadn't seen drummer Johnathan Blake in a few years, and he still plays with a lot of energy. Blake also has excellent control over his volume, which is so refreshing in a smaller room like the 55 Bar, which can easily become dangerously loud. In fact, the overall acoustic presence of the band was one of the best I've heard in this venue. A big surprise was one of my longtime collaborators on electric bass, fellow Marylander Josh Ginsburg. Most know Ginsburg as a crack acoustic bassist, but in this setting, Ginsburg was laying down some Tower of Power inspired sixteenth note grooves that would make you think that he was a full time electric bassist.

Yes, it's fun to listen to music, but I also enjoy playing music, too! And so, my next trip to a New York City jazz club will be as a performer. My trio will perform a double bill with my wife, pianist Kerry Politzer, at Cornelia Street Cafe on Friday, April 29th. My trio will feature Josh Ginsburg on bass and Melbourne native Danny Fischer on drums. Politzer's trio will consist of yours truly on drums, Ginsburg on bass, and Tom Guarna on Guitar. Sets are at 9pm and 10:30 pm We had a great turnout the last time we did this at Cornelia Street, and I hope we will have a good turnout this time as well. I'm itching to play after spending a good portion of the winter teaching. Not to mention being inspired by Helen Sung's skillful playing! 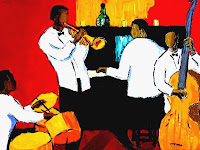