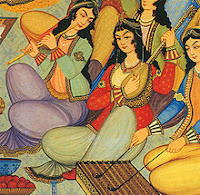 A few months ago, I was asked to be a judge for an in-house concerto competition at Portland State University. I got to hear some great Rachmaninoff and Saint-Saens, and it was nice to listen to some European Classical music for a change. But then, a young lady brought out this Hammer Dulcimer-looking thing, and started to play some very exotic Eastern music. I and the two other judges were entranced with the eerily beautiful tones coming from this stringed instrument. What really got me was when, halfway through the piece, this young lady flipped her instrument over and played on the other side! I was really intrigued. The other judges were leaning towards the pianist who had played Rachmaninoff to be declared the winner, but I was insisting on the lady who played the Dulcimer. It was so different from everything else we had heard.

I knew the young lady because not only is she a PSU music student, but she works behind the desk in the PSU Music Office. So the next time I stopped in, I asked Monica Rabii;"What is that instrument and what kind of music was that?" Rabii explained that it was called the Persian Santur, and that she was playing Persian Classical music. And then she started to explain that the Santur is a diatonic instrument, meaning non chromatic; you tune it to a scale and then you play using that scale. Also, the scale used in the piece she was playing was a G natural minor scale with the concert A, the second degree of the scale, a QUARTER TONE flat. (This intrigued me further, since I had been using the program Mainstage, which comes with Logic Pro, to use non-traditional tunings on my keyboard. I was doing this to keep up with the microtonal leanings of alto saxophonist Rudresh Mahanthappa and guitarist David Fiuczynski, who are my band mates in Jack DeJohnette's current band.)Furthermore, Rabii explained that in Persian traditional music, the ostad, or master, teach the apprentices the common repertoire, which is two hundred short melodies called gusheh, and these are classified into dastgah, or modes. Part of the performance includes an avaz, which is a interlude of freely improvised music. I thought, "this is so much like Jazz!"

I was immediately inspired to compose something for santur and somehow mix it with jazz. So I whipped up what I call "Persian Dance #1", and got Rabii and some other PSU students to get together and rehearse. We performed the piece on a Thursday noon recital, and the response was really good. I decided to write an entire suite for the same instrumentation, which was keyboard, santur, tenor saxophone, upright bass, cajon, and tombek, a traditional Persian drum. Additionally, Rabii is an excellent violinist, so I decided to incorporate that into the piece as well.


We are performing this music, which I call "The Persian Jazz Suite" this coming Monday evening on the Portland State University campus; in Lincoln Hall 75, starting at 7pm. Admission is free. The musicians will be myself on keyboard and piano, Monica Rabii on santur and violin, Nicole Glover on tenor saxophone, Jon Lakey on bass, Cordero Kingsley on percussion, and Mario Sandoval on percussion. I think it's going to be a very interesting cross-cultural experience. I'm hoping to use this music to develop an International Studies class, which will involve bringing this band on the road! Hopefully I can get that together. In the meantime, I hope to see you Monday night! In the meantime, her is a video of Rabii playing her santur.....