Say what you want about Wynton Marsalis, but without his rise, a lot of the jazz which occurred in the 80's and 90's would never have happened. I had all of his albums;from "Wynton Marsalis" to "Think OF One" to "Hot House Flowers' to "Standard Time (Volume 1)". But one record really stood out: "Black Codes(From The Underground)" is still among many musician's favorites. Much of that enthusiasm is not just because of Wynton and his brother Branford's virtuosic improvisation, but also because of the exciting interplay between pianist Kenny Kirkland and drummer Jeff "Tain" Watts. Yes, Marsalis can be called a neo-classicist, even more so nowadays with the Lincoln Center Jazz Orchestra and it's traveling live-action jazz museum. Much of the music could be construed as picking up where Miles Davis and Wayne Shorter left off in the late 60's, before fusion became the rage. However, "Black Codes" put a unique, driving energy into acoustic jazz, creating a style that saxophonist Tim Warfield used to refer to as "burnout."(You might know Warfield from his stints with the bands of trumpeter Nicholas Payton and bassist Christian McBride, respectively. He's put out a number of great recordings on Criss Cross Jazz.)

Yes, some think of the late 80's and 90's in jazz as the "Young Lions" era. Yes, it's true that, thanks to Marsalis and the renewed interest in acoustic, non-fusion jazz, many major labels were signing jazz musicians between 18 and 28 to multi-album deals. Players like Roy Hargrove, Marlon Jordon, Cyrus Chestnut, Marcus Roberts, Joshua Redman, Brad Mehldau, Christopher Holliday, and even Joey DeFrancesco benefited from this flurry of signings. Many of these musicians' careers lasted beyond the decline of the labels. Some didn't. (Christopher Holliday was really blowing up in the early 90's; it seemed like he was going to be a superstar, and then he disappeared. I heard he went back to finish his degree and is now teaching. This is all the evidence I could find on him, one video from BET featuring Marcus Roberts on piano, Keter Betts on bass, and Carter Beauford-from the Dave Matthews band- on drums.)


I suppose the "Young Lions" phenomenon, like many of the sub-genres of jazz, could be considered a "fad"; nevertheless, some of my favorite music comes from that period. In addition to Kenny Kirkland's work on "Black Codes", albums like Branford Marsalis' "Crazy People Music", or "Random Abstract"(also by Branford), or Out Of The Blue(known as OTB and featuring Mike Mossman, Kenny Garrett, Ralph Bowen, and Ralph Peterson)"Live At Mt. Fuji", or Terence Blanchard/Donald Harrison's "New York Second Line", or Kenny Garrett's "Introducing Kenny Garrett"(on the Criss Cross Label), or "Black Hope"(Another Kenny Garrett album), were all very important for me.

"Young Lions" doesn't work as a musical description; that term is really only a marketing ploy. "Burnout" refers to the idea of hard swinging, rhythmically aggressive, interactive, and poly-rhythmic solos over one or a small number of chord changes(maybe a blues form). The melody might just be a short, complex melody, immediately followed by "burnout". The goal is to build to a climatic fever pitch, then possible state the short complex melody as an interlude, then pass it off to the next soloist. The short complex melody might be played in a different tempo-slower or faster-to give the solos some variety. In a set, there might also be a jazz standard, played very traditionally, just to have a breather from all the "burnin' out." Stylistically,  the music of the late 80's and 90's can be seen as a combination of bebop, swing, modal jazz, and in some ways, free jazz. It was a return to acoustic instruments(bass players got rid of the amps and pick-ups and went back to the old style of miking the bass. Of course, when they all got tendonitis from pulling too hard just to be heard, they went back and got pickups.)and an intellectual aesthestic. Also, you had to wear a suit and tie! 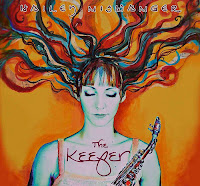 I'm taking a trip down memory lane because I've been listening to Hailey Nilswanger's latest CD. It's called "The Keeper", and it leans heavily towards the Young Lions jazz (that I just wasted four paragraphs talking about). The music is very skillfully played and Nilswanger is unquestionably a great young talent. (I'm reading that she graduated from West Linn High School, which is right outside of Portland, Oregon. Maybe she'll move back and I'll get to play with her at some point...)
I'm guessing that her influences include alto saxophonists like Kenny Garrett, Antonio Hart, and Steve Wilson. She has a great deal of technique, swing, and musicality for a youngster.

Nilswanger has assembled a top notch team of young sidemen. Pianist Takeshi Ohbayashi has definitely checked out some Kenny Kirkland, if not for the exact notes, then for the feeling and articulation.Ohbayashi is a great comper and channels other more refined players like Hank Jones and Mulgrew Miller as well.  Max Moran holds it together on the bass, and does get a few nice solo spots("Straight Up", "Balance" and "B Happy"). Drummer Mark Whitfield Jr. is playing his rear end off throughout the CD; at times, he is the sonic spitting image of Ralph Peterson, who I'm guessing was his teacher at Berklee College of Music. Even his snare sounds like it's tuned similar to Peterson's. Darren Barrett is kind of a ringer on this date; he's a veteran trumpeter who is tremendously gifted and tragically under-appreciated. He plays some wickedly devilish lines on an arrangement of "Milestones". (This is the "Milestones" which is not from the classic "Milestones" album from 1958; it's another tune, which is already pretty challenging. Nilswanger's arrangement is actually adding more mishagos to it; there are odd drum breaks and surprising half steps and embellishments. I think they could have played it straight and it would have been fine, but perhaps it will grow on me...)

The first tune, "Scraps", is definitively a "burnout" type of tune; complex head, swing over one chord. Change tempo, new solo(piano) on different chord. Piano solo speeds back into original tempo. Nilswanger and Ohbayashi take inspired solos. The next cut, "Straight Up" is a medium burn which swings nicely. Nilswanger shows that she knows how to build intensity. "Norman" is a nice gentle contrast, with a more classic feel. Whitfield plays brushes tastefully; Nilswanger solos soulfully.

"Ravine" is a moody rubato ballad, where Nilswanger and Barrett have some beautiful contrapuntal phrasing. "Played Twice" is a not often played Theolonious Monk tune. On the breaks within the melody, drummer Whitfield really channels his mentor Ralph Peterson on this one! Ohbayashi swings very hard on his solo, and Nilswanger slithers around on her soprano with a short but well crafted solo.

Nilswanger and Ohbayashi collaborate elegantly on Cole Porter's "Night And Day". I like how Ohbayashi keeps the tempo without walking a bass line. Sometimes he almost implies stride, but it's more reminiscent of how Bill Evans comps on "The Tony Bennett/ Bill Evans Album". It's rare to hear young pianists who can comp so well. (I'm intrigued by Ohbayashi. I noticed on his website that he teaches the Taubman technique; I studied with a pianist named Fred Karpoff who showed me many of the Taubman principles. It's helpful for pianists who have been injured or who want to avoid being injured.)

This unit sounds as if they play together often, not just for the purposes of this recording. Nilswanger confidently leads her crew, and has a full, vibrant tone and mature phrasing. I think Nilswanger has a bright future as an saxophonist and a composer.

Nilswanger and her young crew don't have their own unique sound yet-HOWEVER, I am actually glad that they sound like SOMEBODY! And they sound like they check out HIP somebodies, which is better than checking out NOBODY! Students have to emulate in order to learn the craft. These guys and gal are doing it. But I'm thinking, "What will they sound like when they are 40 years old?"Time shall indeed tell.

Don't get me wrong; these young players have tons of potential. If Nilswanger and company had been around in the 80's and 90's, they probably would have been signed. But many of the cats who were "signed" ended up fizzling out, probably because they were "signed" too young. Nilswanger self produced these CDs(the second one was funded by a Kickstarter campaign), and the climate is so different now for young players; with a handful of exceptions, the opportunities for gigs and financial rewards are much harder to come by. I think in some ways it's actually better that young players have to pay more dues; this will more easily prevent the "flash in the pan" syndrome.


All that being said, bravo and best of luck to Hailey Nilswanger and her band! I look forward to the next one.

I leave you with an excerpt from an interview I did with Steve Wilson in 2010, related to the subject of longevity. I think it helps illustrate my point:

GC: I feel like at age 40 I'm just getting started with understanding the music. I ran into Jon Hendricks a few years ago, and he told me that "it takes a lifetime to learn this music". And he was in his 70's at the time. Do you think, in this era of instant gratification, that students can have the patience to survive the lifelong journey of musical development?

SW: I think it's possible. It's very possible. We are in the midst of a cultural shift, some say a cultural war.The students will have to figure that out. It is a lifetime study. I tell students: " This is a marathon, not a sprint.!" And a lot of it is who is left standing when you are 70 or 80, like a Jon Hendricks. You could become a star at 25, but you might not be a star at 30. So you need to be prepared when you aren't a star. And what's going to carry you the rest of the way. There is a real ebb and flow in terms of what we perceive as success. But REAL success is when you have the tools and resolve to keep practicing your craft when nobody's looking. But I do think it's possible. It will be hard for some to shake the cultural tendency to say," If I don't make it by the time I'm 25, then I don't want to do this." But some will figure it out, and I do think we will be in good shape musically.