"Berklee is a great school, but every musician they churn out sounds the same." I heard someone say that a long time ago. And I always wondered whether that was true. I never went to Berklee College of Music, but I know a ton of musicians who did, and I wouldn't say they all sounded the same. A majority of the Berklee grads whom I've worked with had a high level of skill. But they weren't clones of each other.

As a jazz educator, I can see why there is cause for concern; if you give everyone the same tunes to learn, the same solos to transcribe, the same scales, etc....then yes; theoretically, you would have legions of musicians who sounded the same. The good news is that this is a theory. In reality, most musicians, at least in jazz, end up sounding different eventually. This is because jazz music encourages originality at it's core. Even the most conservative program will produce students who don't sound identical.

The incredibly subjective question becomes, "On a scale of 1 to 10, how original is any given musician?" This is an extremely debatable idea; for example, I think Kurt Rosenwinkel has a very original sound and conception. However, some might generalize and say that Rosenwinkel is a Pat Metheny clone (I don't agree at all.). I don't believe that Rosenwinkel would be where he is today without everything that he learned from his Berklee teachers and peers. So is he 100 percent original? I don't think any musician is.

I think that this idea of "not wanting to churn out a bunch of musical clones" is at first glance, very logical. However, in the long run, I think it's actually worse to "churn out a bunch of musicians who cannot play well enough to work as musicians in the real world." I'm finding that my own misgivings about teaching in a "cookie-cutter" fashion are being overrun by worries about not producing students who have the necessary skills to be successful. 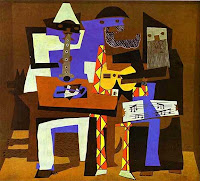 Furthermore, and this might sound crazy, but I am not convinced that every musician is meant to be highly original( in the sense of a Kurt Rosenwinkel). I think the vast majority of players want to be really good, and get gigs. It might not go beyond that. I think originality should be encouraged; students should always write their own music and improvise as they see fit. But on a scale of 1 to 10, the result might not be thought of as  the next Theolonious Monk or John Coltrane. And that's ok! I think originality happens; it can't be forced. Skill is another matter; skill takes methodical work.