A good friend of mine used to have a regular solo piano gig in a Manhattan hotel. While some might think that there are many advantages to having a steady hotel gig in times like these, my friend spent a good deal of time complaining about the job and relating some depressing yet amusing incidents which would occur during the job on an almost nightly frequency. It seemed as though anything and everything could happen, from drunken guests rowdily requesting "Rhapsody in Blue" to mothers changing their babies diapers right next to the piano. So when my friend asked me to sub for him one night, I had mixed feelings about showing up to play: would I have a relatively uneventful evening of solo piano playing? Or would I have to fend off rabid Billy Joel fans insisting on "The Piano Man" for the fifteenth time?

The first hour of the gig was quiet. Despite the fact that the piano was in rough shape, and maybe hadn't been tuned since the Nixon administration, I played jazz standards in a non-threatening manner for an uninterrupted hour, and then took a fifteen minute break. "What is the big deal?" I mused to myself and the plate of cheese and fruit that I took from the free spread at the bar. "This gig is a piece of cake." I glanced at my watch and approached the piano bench for another set of lobby-friendly jazz standards. 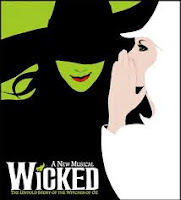 Midway through my set, a blond woman, possibly in her late 40's, enclosed in a beige Hilary Clinton-style pantsuit, sidled up into my piano air space. She wasted no time in letting me know that she was very annoying:"Uh, yeah, that sounds great and everything...", I wasn't even finished the song," ...but do you know any songs from Wicked?"

I had decided fifteen years prior to this moment that if anybody came up to me on a solo piano gig and made requests while I was still playing AND expected me to talk and play and not be incredibly annoyed all at once, then I would grind the song to a halt and defend myself. Well, first I would GLARE at them and then mount a counter-offensive.

"YOU DON'T KNOW WICKED? IT'S THE HOTTEST SHOW ON BROADWAY!", she proclaimed. I sarcastically  wondered to myself if she was a music critic for the Times.

She totally ignored what I had just said. "Do you know THIS song from Wicked?" And then she sings what she thinks is music, but it sounds more like someone waking up from being in a coma for 6 months.

"Lady, I told you, I don't know any songs from Wicked! If you have sheet music in your purse, I'll happily try to read it, but no, I don't know the musical."

"Well, you really should learn some of that music....." She seemed to be finished, but before she scurried away, there was one more knife-in-my-soul kind of request: "My sister is sitting over at this table. She just graduated from Columbia with her Doctorate. Can you play something appropriate for that?"

Wow. Just......wow. "Um, what about Pomp and Circumstance?" I was half to eighty-five percent joking. She looked at me quizzically. I proceeded to hum Edward Elgar's famous graduation processional.

"Sure! Play that!" She said, clearly forgetting to offer me a gratuity of any sort, as she sauntered over to where her highly-educated sister was sitting with her husband.

"I'm NOT going to play that!" I shouted, and then I picked up where I had left off in the song I was playing before the Wickedness. Soon enough, it was time for another break to rest my fingers and my mind.

I had actually sort of forgotten about the first half of the Wicked incident when the second half began. I was resting on one of the lobby couches near the piano, when I realized that the Wicked witch and her
sister the Doctor and her husband were sitting two couches over. And they were discussing their displeasure in my lack of Wicked awareness.

"Can you BELIEVE that the pianist didn't know any songs from Wicked?"

"How could he not know any songs from Wicked? IT'S THE HOTTEST SHOW ON BROADWAY!"

"Jeez, How can he be a piano player in NEW YORK CITY and not know any songs from WICKED?"

I could see them from where I was sitting, and was thinking about walking over and explaining to them how I could be such an ignorant piano player and still make a living in New York. But I had one more set to go, my fingers and brain had forty-five minutes of non-Wicked music to deal with, and I just figured what the heck.

I still think that my friend is lucky to have his steady gig. But if it was my gig, I don't know if I personally could handle the constant psychological torture. Yes, there are worse jobs. Playing piano in a hotel is more satisfying overall than, say, working at Starbucks. But I think about it like this: This Wicked Witch of the Pantsuit heard me playing jazz and asked me to do something else because that's what SHE wanted. If you work the counter at Starbucks, nobody comes in and asks for a Quarter Pounder with Cheese! You wouldn't say "Can you BELIEVE that they didn't have a Quarter Pounder with Cheese?" NO! You are in the wrong restaurant! Go to McDonald's! If you want songs from Wicked, then buy tickets for Wicked! I think they are on sale NOW! In fact, I heard from somebody that it was the HOTTEST SHOW ON BROADWAY.......