My First Gig as a Jazz Pianist 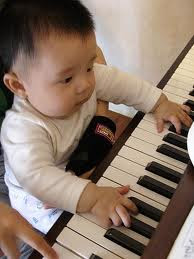 How many of you musicians remember your first gig? ( Gig, for those of you who don't know, is a slang for any type of concert, performance, musical job, etc...) I do remember my first gig as a jazz pianist. It was not my first time being paid to play music: I had been playing trumpet and drums for a while, and had done some brass quintet gigs in high school and also played drums in some jazz and rock bands. But I was slowly gravitating towards the piano in college. I started jamming a bit in practice rooms around Peabody Conservatory with trumpeter Alex Norris. I only could get through a handful of standards, but it seemed like enough to get through an hour's worth of playing.

I would also get together and practice with bassist David Ephross, who I had known since elementary school. David was also making a transition from classical flute to jazz bass, so we were in the same boat , in terms of moving to a second instrument and a second genre. We didn't know a lot of songs, but we had learned some of the hardest ones: Cedar Walton's "Bolivia", Benny Golson's "Stablemates" , and John Coltrane's "Moment's Notice". (I think this is how we fooled people into believing that we were better than we really were. ) I remember that we didn't really have enough vocabulary to "stretch out" ( play long solos) so we would play the melody, take one chorus each, and then take the melody out. We had no idea that some players could take twenty to thirty choruses on a song and never repeat themselves! ( A chorus in jazz usually means one time through the entire form-whatever form is delineated for improvisation. In case you weren't sure!)

I don't remember how we ended up with the gig at JK's Pub in Columbia, Maryland, which was a short drive from my mother's house. And somehow, we had  recently met two older musicians from Baltimore: Richard Dorsey on tenor saxophone and Chris Perry on drums. So we called them and they agreed to do the gig.  David and I met a few times the week before the " gig" to play through our non- extensive repertoire. "So I guess we'll play the melody, and then you take a chorus, and then Richard will take a chorus, and then we'll end the song?", David would inquire. " OK! That sounds good!" I would reply. So we continued to practice the tunes in this manner.

The night of the gig arrived , and I had to borrow a Fender Rhodes from a pianist and bassist named Josh Schwartzman. Josh was, and still is , the leader of a Baltimore based Latin Jazz band called Rhumba Club. In retrospect, I think Josh was reluctant to lend me the Rhodes: It was in really good condition, great action, and it had the separate speaker, a real beast to carry. I swore I would take good care of it. I suspect also that Josh didn't believe that I was ready to do a gig on piano; he had been showing me some voicings and some tunes but it was really all new to me. I was still primarily a classical trumpet player. Yet I wanted to see how this piano thing would play out.

JK's Pub was not a hip jazz club, it was really just a neighborhood restaurant and bar. There was a stage in the corner near the front window, and the tenor/Rhodes/bass/drums quartet was really packed in tightly. Richard Dorsey called Theolonious Monk's " Well You Needn't" to start the proceedings. I recall feeling like an astronaut upon the moment of liftoff. " This is really it!" I said internally, as we started to play.

We did record the performance on cassette tape, as we did all of our performances for the first few years. (And I remember many nights we would stay up all night listening to those tapes, right after the gig. Even after a 3 set gig, we would listen to all three hours of it.) Luckily, the tape of this gig doesn't not exist anymore, as far as I know. If I listened to it now, I think I would be terribly embarrassed. A song like "Well, You Needn't "was probably too advanced for me: I was most likely playing at best like a weak clone of Herbie Hancock, and at worst laying down some random chromatic crap. Which is what I do now, but it was far less compelling 20 years ago! ( Somebody say "well, you needn't have played it!")

But what was most shocking for David and I was when Richard called Moment's Notice. This is a Coltrane classic, a real uptempo harmonic workout. And Richard was clearly a Coltrane devotee, as many tenor saxophonists are. When he played that melody, he might as well have been John Coltrane himself, as far as we were concerned. David and I looked at each other as if to say telepathically, " Oh, we're playing with adults now!" Furthermore, Richard played about 25 choruses, each one better than the last. Every time that the Bb pedal came around signaling the end of a chorus, I glanced at David; I'm sure he was thinking, " Wow, he's taking another chorus!"

And with that, we were given the green light to do the same. I played for as long as my inexperienced fingers could handle. This was the first real jazz gig that I had ever done on any instrument. I felt like I could play anything on that Rhodes and it would be right. The frustrations of playing classical trumpet had completely left my psyche. I finally felt free. At last I felt like a real musician. Little did I know what triumphs and trials lay ahead.

Feel free to post memories of your first " gig"!