" The Worst Music I've Ever Heard!" 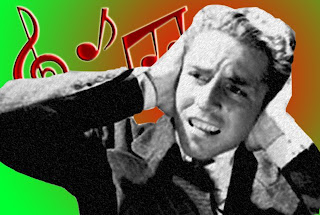 Recently, I was reminiscing( not in tempo, unfortunately) about my early experiences as a jazz listener. What has never ceased to amaze me is how many people can hear great music and just LOATHE it with passion. You might say, " Maybe they need to give it a chance..." No, they've given it a chance, they've listened for an hour or more , and they would rather be forced to watch reruns of " Joanie Loves Chachi" than listen to jazz music.

Two separate yet similar experiences come to mind. I remember sitting out on the playground on my street with some friends. Someone had brought what we used to call a " boom-box"( those of you born before 1990 will remember). We were listening to the music of the 80's on the radio: Def Leppard, Duran Duran, a band called Midnight Star  (anybody remember that song Freakazoid?), and so on. And then someone started tuning the dial to different radio stations, and all of a sudden, ever so faintly, some jazz leaped forth from the massive speakers. I proudly proclaimed, " I know this,it's Charlie Parker and Dizzy Gillespie from Live at Massey Hall. I love this!" And I started sing along with the Bird solo on All The Thing You Are. My friends immediately looked at me with disgust, as if I had told a foul joke involving a Priest, a Rabbi, and a 12 year- old stripper. "You LIKE this CRAP?" and immediately they changed the station, back to some superior sounding Quiet Riot. I began to protest, but my friends defensively blocked the boom-box. As the lilting strains of " Come On Feel The Noize" floated with the summer air, I hung my head low and walked back into my house.

I also remember an incident from the same era in which a concert was performed at Harper's Choice Middle School during a special afternoon assembly. The band was a quartet of African-American men. The instrumentation was piano, bass, drums, and tenor saxophone. I remember that the saxophonist and band leader informed the young audience that the music they were about to hear was jazz, gospel, and R&B influenced. The band performed for an hour: I had not witnessed many professional concerts at this young age, and this concert was very impressive to say the least. I really got caught up in the energy of the music. The tenor player took lengthy, emotive solos and he would bend his body to the side on occasion, say, if he had played a particularly sour blues note. I was in a trance: I recall thinking that this was the greatest music I had ever heard. (Now, I imagine if I heard this band today, I would probably not be affected in the slightest. But at age 12, this might as well have been The John Coltrane Quartet featuring McCoy Tyner, Jimmy Garrison, and Elvin Jones.)

The concert ended. Still kind of in a happy trance, I returned to Mr. Zigenfuss' math class, sat down at my desk, and said openly and with vulnerability, almost to the point of tears, to anyone within earshot,
"Wow, that was really great music. I've never heard music like that from a live band." One of the tall, popular boys immediately disputed my testimony with, "You LIKED that CRAP?"

And so, even as an adult and a somewhat professional musician and educator, proud as I am to be interested and involved in jazz and creative music, I always have experiences like these weighing on my conscience. How can music so unquestionably amazing and beautiful be so HATED? Like Art Blakey said, " Maybe WE'RE wrong..."

In the onset of the 1990's, I was doing my steady weekend  solo piano gig at the Omni Inner Harbor in Baltimore ( ironically named in that it was at least 10 blocks away from the Inner Harbor). I will admit that since I was alone and, most of the time, no one paid any attention to me, I used the job to practice. I might play songs I didn't know well, or maybe I would noodle around certain harmonies, or maybe try to compose something spontaneously. I certainly had a repertoire, albeit meager, since I had only recently decided to make an attempt to be serious about jazz piano as a career option. One night I was playing, well, practicing a tune called "Night Dreamer" when an old woman, maybe in her seventies, sidled up to the piano and said to me, "That is THE WORST MUSIC I HAVE EVER HEARD!" I blankly stared at her as she slithered into the night and silently argued, "But, it's Wayne Shorter's Night Dreamer..."

OK, not everybody gets it the way jazz fans do. But what about simple politeness? Especially in the case of a live performer, to approach him or her and toss insults so casually? When they say " Don't Shoot The Piano Player," that also implies don't shoot him down with rudeness and harshities! ( I made up a word: Harshity ( noun) -the opposite of " nicety". Don't look it up cause it's not there...yet...)

You might think maybe only the solo pianist gets harassed. I used to think that as well: I had this theory that as long as there were at least two performers, then dissidents would leave you alone. Nevertheless, I was onstage in a sold out 2500- seat theater in Lisbon, Portugal back in the autumn of 1999. Cassandra Wilson had taken time out after a handful of songs to introduce the band. The room was quiet and attentive. Without warning, a lightning bolt of protest broke the calm: an angry male voice with a heavy Portuguese accent cried out, "THIS EES THE MOST BORRINGG MUSIK I HAVE HEARRD EEN ALL OF MY LIFE!" Ironically, everyone applauded, because the Portuguese natives didn't understand what the disgruntled man had shouted. Cassandra didn't skip a beat. "Thank you, we love you..." she announced, as if the man had yelled something totally the opposite.

Would this insane Portuguese putz have shouted at the Lisbon Symphony Orchestra? Would he have voiced his displeasure in such a manner at a Quiet Riot concert? ( In the latter case, any shouting would probably be drowned out by everyone else shouting and " feeling the Noize...") What is it about jazz, whether it's me at age 20 fiddling on the ivories in a hotel lobby, or Cassandra Wilson at the height of her powers, to illicit such strong negativity?

My favorite heckler experience occurred in the late summer of 1994. My father had hired me and  vocalist Heidi Martin to perform twice for something called the Hospice Cup Regatta, a charity event, held near Henderson Harbor in upstate New York. A local bassist and drummer were hired to round out the band. We played standards while people ate buffet meals on soft paper plates. Mostly the people just ignored us, but we were enjoying our music. I was playing on some kind of keyboard.

I was very excited at that time because in a few weeks after the Regatta, I was headed off with saxophonist Gary Thomas for my first tour of Europe. So while we were playing somewhat recognizable standards, I was getting geared up to play with Thomas. If you are familiar with Thomas' music, you will understand that he has a very modern and complex melodic and harmonic language. This language has made a huge impact on my playing, and this was reflected in all of my solos during the Regatta performances. So you can imagine that if one of the Regatta-goers would have ignored their soggy potato salad for a few minutes and actually listened to what we were playing, they might have been a little confused. But as I said, they were ignoring us, so I went about my business of trying to play "The Days of Wine And Roses" as jaggedly as possible.

So at the mid-point of our second performance, immediately after a highly chromatic rendition of "Star Eyes", a white-haired, slightly bald, thin man wearing glasses approached the bandstand, which was probably right next to the soggy potato salad tray. " Can you guys play Mack The Knife, something like that?" He seemed like a kindly old man. I offered " Why, I think I can get through that tune..." Angrily, with an evil eye beaming into my skull, he grunted "....BECAUSE WHAT YOU WERE PLAYING WAS BULLSHIT!" I kind of gasped..." Uh, ok..." I stammered. The old man shook his head and walked away. " I'm sorry , but...what  you were playing was BULLSHIT!" and then he was gone from view.

I tried to maintain my composure. " OK, let's play Mack The Knife, then." But I couldn't do it. I was frozen with rage. I was shaking. " OK, let's take a break." So I got up from the keyboard, paced around outdoors for a few minutes, and then planned my retaliation. I walked right towards the old man, who was sitting with his younger family members at a table. " Excuse me, sir", my fists were clenched,"You have the right to your opinion, but you have NO right to speak to me that way." Seated but still powerful, the devil eye reappeared and bore a hole right through me. "WHAT YOU WERE PLAYING WAS BULLSHIT! BULLSHIT!", he cried in a ghostly voice.

Out of nowhere comes my father. " Jack, you're drunk" my father states. " If you don't sit the fuck down and stop bothering my son, I'm going to take you outside and kick your ass!"( Sometimes it helps in a pinch to have a father from Brooklyn to defend you now and then.) At that point, the gig was declared over and in my view, there were no winners. Heidi and I drove back to Washington, D.C. in a very quiet mood.

But this was not the last that I heard from Drunk Jack. Six months later, out of the blue, I receive a letter from upstate New York, from this crazy old man with devil eyes. The letter went something like this:


Dear George,
I am writing this letter to ask for you to forgive me for my behavior during  your  performance at the Hospice Cup Regatta. I was very drunk that afternoon and I did not mean the awful things I said to you. I have had alcohol problems for many years and have proved to be an embarrassment to my family and  friends. I hope you will find it in your heart to forgive me for my shameful behavior. Your music is wonderful.  I wish you the best of luck in your career.
Sincerely,
Jack
Jack, you crazy drunk, wherever you are, I forgive you. And I'm sorry you never got to hear my Gary Thomas-inspired version of Mack The Knife.