I'm writing this deep inside the Iron Curtain. Well, formerly known as the Iron Curtain. Ljubljana, Slovenia, to be exact. Ljubljana is the capital city, and located in the center of the country. Slovenia was part of Yugoslavia during the Cold War, and  gained it's independence in 1991. It is now part of the European Union. I just went for a nice run down into the center; I found my way to a lovely park that had some beautiful sculptures. It was a very cultured way to do my interval training.

But let's back up for a minute. When I last wrote, I was in the Azores Islands far off the coast of
Portugal. After that three day excursion, we flew pack to Lisbon and then to Amsterdam, the capital and largest city in the Netherlands. We got in very late at night, and some of us were hungry, so I and some of my bandmates ventured downtown to grab a kebab. On our way, we witnessed a car hitting a bicyclist. Europeans seem to be very keen using bicycles as transportation; however, you can never be too careful, especially at night.

The weather was gorgeous the next day, so I set out for a run. I had wanted to do two hours, but since an incident in Dresden years ago, I am afraid of getting lost, so I did about an hour outdoors and then did another 45 minutes on a treadmill in the hotel. . Before I knew it, it was time for sound check and concert.We were playing in an concert hall right next to the hotel; it's called Muziekgebouw-part of the Bimhuis, which is the most famous jazz club in Amsterdam. It was one of our best concerts of the tour, and the audience was enthralled. Within the framework of our repertoire(all compositions of our leader Jack DeJohnette), the room for creativity seems to grow exponentially.


The next gig was in Rotterdam, which is a one hour drive from Amsterdam. Rotterdam has a much different vibe as a city; not as fun or pretty as Amsterdam. But then again, we don't get to do much sight seeing. I went out to find a health food store, went on the treadmill, took a shower, and then it was time to go to the venue. Again, it seemed as though the band was starting to lock in even better than the night before.

The next day, we drove back to Amsterdam and flew to Venice,
Italy. A two hour drive took us to Rovereto, a beautiful old city. As to be expected, the promoter Enzo took us to a fabulous dinner at a restaurant steps away from our hotel. The Rovereto region is known for wine; it is said that Mozart, on a visit to Italy, wrote to his father about the wine of Rovereto. The region is also know for grappa; in fact, despite my almost total abstinence from alcohol since March of this year, I had half a glass of wine and one taste of grappa with my meal. It was worth the guilt.

The next day, we had the morning and afternoon free. I decided to try another two hour run. I found an absolutely breathtaking trail next to a river and cutting through seemingly endless vineyards. Apparently, this running and biking trail goes for about 85 kilometers. It was right within a valley; mountains and clouds surrounded me. I could see a huge castle in the distance. In terms of scenery, it may have been one of the most incredible runs I've ever
done. Somehow, I felt as though I wasn't even worthy of such a scenic experience.

I was able to walk around Rovereto just a little before the soundcheck. And of course, after soundcheck, the promoter took us to an even better restaurant than the previous night! I maintained my willpower and resisted the pasta(Rudresh Mahanthappa was raving about it. I tried not to let that bother me…..ha ha). And the concert was even better than the previous night. When you have great audiences who are attentive, respectful, and clearly hungry for good music, it makes our job extremely easy. Luckily, Jack DeJohnette's career has earned him a lot of respect; therefore, when people come to see him, they are very much familiar with his playing. At least, in Europe this is true.

Our tour is winding down. We have a gig in Salzburg and then another in the Ukraine. I'm looking forward to getting home to see my family and to attend to my students at Portland State University. But I feel extremely blessed to get the opportunity to get to go out on stage with a jazz legend(not to mention three other fabulous musicians) and be as creative as possible. And then to get paid, eat good food, see the world, and still have some time to exercise! Sometimes in this way I also don't feel like I'm worthy. But I just try to learn and enjoy the experience as much as I can, and not to take it for granted. 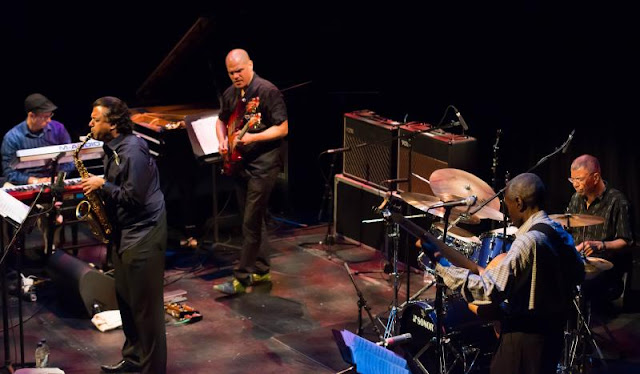