I recently received a copy of drummer Reggie Quinerly's newest CD, which is entitled "Music Inspired By Freedmantown." I must admit, after hearing the first tune(called "#13 A Corner View from Robin Street", which is a harmonically colorful swing-shuffle tune), my first reaction was " I hope this isn't one of those recordings where the leader forgets to feature themselves!" I say this because I have experiences listening to recordings or live bands when this has been a problem, at least for me as an observer. Sometimes, the bandleader will either be too intent of letting the side players, all star or not, have a chance to shine, OR despite the fact that they are obviously motivated enough to book a studio (and shell out bread for a recording), somehow they are hesitant of actually creating a space so that he or she can actually stand out as the main musical topic of conversation. This is especially likely with rhythm section players who lead bands. All of that being said, there are ways to avoid that. Mr. Quinerly has done just that; he has achieved it by producing a solid album overall, an album which well features his 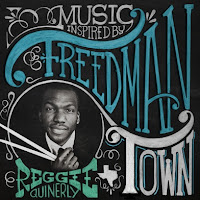 compositions, arranging, selection of musical collaborator, and some extremely musical and tasteful , and skillful drumming. In fact, the more I listened, the more Quinerly's taste, sense of space,and musical vision spoke more volumes to me than if he had taken a long extended drum solo on every song. (And when he finally does solo, it is, not surprisingly, killing!Check out his up tempo prowess on "I'm Old Fashioned".)

Indeed, Quinerly shines as a drummer who supports; luckily, he has top notch musicians to inspire him. Tenor Saxophonist Tim Warfield is one of the most underrated saxophonist of our time. (Warfield, in addition to being well documented as a sideman with Christian McBride and Nicolas Payton, has made a bunch of great CDs for the Criss Cross label.)Guitarist Mike Moreno is an up and comer, and really shines on "Live from The Last Row", a flowing bossa (the opening riff reminds me of Stevie Wonder's "Overjoyed."), which is quite lyrical and harmonically astute.
Every time I hear Gerald Clayton, I'm more and more impressed; this young pianist is quickly becoming one of the most in demand sidemen in jazz, and it's perfectly evident throughout the CD; check out his solo on an uptempo version of "I'm Old Fashioned"; he's got the speed, but most importantly, he's got the rhythm, a beautiful consistent tone, and he also knows how to develop ideas. Vicente Archer is one of my favorite bass players, and he also supports well here; on "Fenster", Archer lays down a relentless groove which Quinerly solos over quite inventively.

There are some vocal surprises on this date: Quinerly presents a spoken word explanation of exactly
what Freedmantown was; the fourth ward of Houston, Texas, settled by 1,000 recently freed slaves in 1866(according to wikipedia). It's a poignant interlude, accompanied by Enoch Smith Jr. on organ. Speaking of Enoch Smith Jr., I was unaware that Smith was a vocalist. What could be called the "title" track features Smith's soulful tenor voice on a song called "Freedmantown". Music by Quinerly and lyrics by Smith, it's a gentle backbeat which might remind you of the "Mo Betta Blues" theme song. I've reviewed Smith's piano recording in jazztruth; I'm wondering if he plans to record as a vocalist. He might have a whole new career.

Ever since I met Sarah Elizabeth Charles last year at the Bern Jazz Festival, I've thought she was one of the top young jazz vocalists to watch out for. Her clear, passionate sound is invitingly featured on a duet with Smith(here playing the piano quite sensitively) called "Victoria". Quinerly and band are tacit here, except for the fact that Quinerly composed the music and the lyrics. This to me is another example of the high level of musical maturity evident on "Music Inspired By Freedmantown". You can't go wrong on this one,
folks; it's available now on Itunes.
http://www.reggiequinerly.com/reggiequinerly/Welcome.html