Drummer Scott McLemore, originally from the great state of Virginia, lived in Brooklyn for many years before moving to Reykjavik, Iceland with his wife, pianist Sunna Gunnlaugs. I can only imagine that Reykjavik is a completely different lifestyle compared to the mean streets of Park Slope, Brooklyn. (If you know Park Slope, it's more mean in the sense of you can't afford to walk down 7th Avenue, much less live on 7th Avenue...)But moving out of the center of the jazz world has not diminished McLemore's musical reflexes or ambitions. His latest release, "Remote Location", combines his American fire with a perhaps more Scandinavian sensibility. It's a very satisfying album; the music here is inventive and inviting.

As a drummer, I've always liked McLemore's balance; he has very precise time and very careful 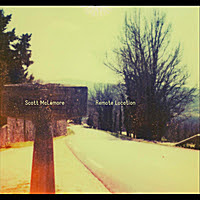 interpretation. Everything he plays is very clear, and his tone from the kit is marvelously controlled. He can bash, if it's needed, but if it isn't, he won't. McLemore is an extremely musical drummer, and knowing that would lead us to believe that his compositions would be musical and insightful as well. All the compositions on "Remote Location" are his, and they are all not only great works of art, they are great vehicles for improvisation. The opening title track has a kind of secret agent spy movie suspenseful quality to it, with a gently angular melody over an insistent jagged rhythm, which McLemore fills around with his snares turned off. Óskar Guðjónsson, a tenor saxophonist with a light sound reminiscent of Stan Getz, solos quite beautifully here; his playing is very melodic, rather devoid of the tenor "cliches"(Trane licks, Brecker licks or Steve Grossman licks....which, don't get me wrong I love! Just not all the time.....). Róbert Þórhallsson on electric bass is impressive right away. It's cool that electric bass can enhance an essentially acoustic jazz group and not immediately push it into a "fusion" zone that maybe isn't implied by the music.

"Secrets of the Earth" is soft, rather touchy feel-y, and harmonically rich. Sunna Gunnlaugs makes a gentle piano statement, as does Guðjónsson and guitarist Andrés Thor, whose solo is short but climactic. "Citizen Sitting Zen" is even more mellow, with McLemore making great use of mallets. The melody here begins with almost symphonic stark unison lines, and then relaxes into something less weighty with the addition of some harmonic awareness. (You might want to sit in the lotus position for this one....)

It's great to hear an album where all of the music has consistency, and yet each composition is unique in it's own way. "Una Danza en la Cocina" is a nice piano and drums interlude (I believe McLemore is using either heavy brushes or , no, these "hot rod" bundles of sticks. They have a sound which is somewhere in between sticks and brushes.). This leads us into "Charlottesville", a straight eighth ballad which I want to say is something maybe Monk would have written if he live in Iceland. By that, I mean it has more dominant 7ths and whole tone scale implications than you might expect from a piece like this. "Dunegrass" is almost like three tunes in one. It begins with an almost country-western feel to it. Gunnlaugs makes a nice bluesy statement here, and showcases here warm touch and controlled energy. Ah, but wait, all of a sudden, the meter goes from 6 to 7, and harmonically ends up more lydian than blues. And then the tempo picks way up and the piece ends dramatically with some weird guitar effects thrown in for good measure. 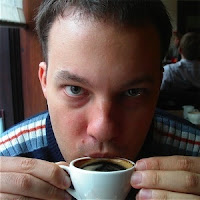 When McLemore and Gunnlaugs were in Portland and played at Ivories, I enjoyed them immensely; they were perhaps in the top three concerts I've hears at Ivories in the past year. ( It was mostly music of Gunnlaugs, but McLemore really impressed me with his dynamics and subdued intensity.)How often will they be in Portland? Obviously, they are a world away in Iceland, so it will probably be a good while before then return to the Pacific Northwest. However, you can easily download "Remote Location" and immediately get a taste of McLemore's highly creative and listenable music.