I'm extremely encouraged by many of the young musicians and vocalists coming on to the scene. The impact of widespread jazz education manifests itself in the fact that there are huge quantities of skilled musicians graduating and looking for work. In this over-saturated environment, mere skill is not nearly enough; today's musician must set themselves apart from the crowd. It's the x-factor which is probably the hardest thing to "teach" in music school. How do you teach uniqueness? (The amazing thing is that even this is becoming the norm; I hear so much music which is not only extremely well crafted and showing of virtuosity but is also quite original. Woe to any musician who thinks their first album should be a collection of jam session tunes.....unless they are really smoking them like nobody's smoked them before....) 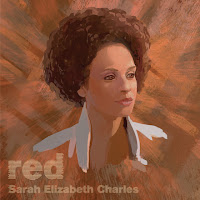 curriculum. Her debut CD, "Red"(Truth Revolution Records) is pleasantly provocative. It is an acoustic jazz vocal recording, however, it's so much more. Charles has a crystal clear voice and impeccable phrasing. It's very accessible, however, her musical sensibilities are quite wild and free. Secondly, and this might be what marks the significance of this recording(as well as the trend among the younger vocalists I hear nowadays)is that Charles is not afraid of her band! Let them play! And she does. It's a musical collaboration, rather than "Hey, guys, this is MY freaking gig!" The team effort makes for better music. Pianist/keyboardist Jesse Elder, bassist Burniss Earl Travis, and drummer John Davis are playing on this CD like it's a gig and not like it's a singer's gig. (Not to say that young musicians shouldn't know how to make a singer's gig. That's an important art in itself. Hopefully not a lost art. )

The title track, "Red," opens organically with a mellow electric bass solo, which blends into a wash of Rhodes, cymbals, and reverb-y vocal. The use of overdubs and stereo panning gives it an ethereal, trippy effect. It's essentially an open vamp, but the hurried activity of Davis' sends the piece to a peak. After it dies down a bit into a "In A Silent Way" vibe, there is overdubbed excerpts from studio conversation, which have an even more trippy, "I Am The Walrus" kind of vibe. (Maybe don't listen to that part while driving...ha ha.)

There's a really radical 7/8 meter treatment of Jobim's "How Insensitive"; it's almost unrecognizable,which is perfectly fine by me. (You could modify the old joke: How many jazz singers does it take to sing "How Insensitive?" Apparently, ALL of them.) We've heard this song done as a light
bossa enough. Let's hear Charles' version. The enthusiasm of the rhythm section makes this one cook.

As I listened to the G7 funky original "Perspective", I thought about how much I liked the sound of this recording: this was recorded at the well known Systems Two, located in Ditmas Park, Brooklyn. It's a great room and a longtime favorite for jazz musicians. But the sound is a bit dryer than what I tend to expect from Systems Two.( I actually am not a huge fan of excessive reverb.) Kudos to mixing engineer Dave Darlington for doing justice to this project.


"Red" is a nice mix of material. Four of the tunes are from Charles' pen. Besides the aforementioned Jobim tune, there is a hip version of a Haitian folk song called Wongolo Wale. Again, great use of vocal overdubs, and keyboardist Elder takes a nice ride on the Fender Rhodes. "Mesi Bondye" is another Haitian song(The phrase means "Thank You, God"). This has a nice jazz interpretation of Afro-Caribbean rhythm, and is a dramatic way to end the CD. Seven tunes seems a little short for an album these days; however, it's quality over quantity for Charles' first project. I would have liked to hear Charles improvise more; I know she can since I heard her scatting the first time I heard her in Bern, Switzerland. Well, maybe she didn't think it was appropriate for this project. All that said, "Red" is a great debut and you should run through the internet to buy this CD right away! I eagerly anticipate more great music in the future from Sarah Elizabeth Charles.
http://sarahelizabethcharles.com/