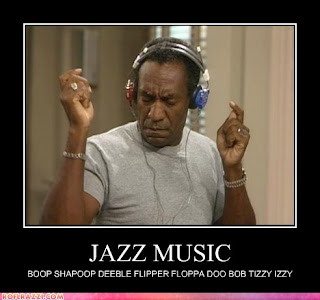 (Disclaimer: much of the following is meant as humor, although it's based on truth....which most comedy is. Or so I have read.)

I've been teaching jazz history since 2009; when I joined the faculty at the University of Manitoba in Winnipeg, Jazz Department head Steve Kirby asked me to teach the Jazz History class.... two weeks before the semester began. Well......I didn't have much time to prepare a syllabus, but I had heard of Louis Armstrong, and also Wynton Marsalis, so I figured I should mention those two names a lot, and then ask the students, "what do YOU think?" as much as possible. Yeah, that should fill up some time.....


I believe that my "skill" of being able to "teach" Jazz History was one of the reasons I was hired at Portland State University. So.... here at PSU, I've just finished a term of teaching Jazz History to a group of 190 mostly non-music majors. It was, in all seriousness, a lot of fun, and I think a lot of the students enjoyed it, and may have actually learned something. It would have been nice to have more interactive class discussions, but since I was the only one with the microphone and the powerpoint presentations, it tended to be very one -sided.


Just for laughs, I modified one of my Jazz History tests and posted it below. Let's see if those of you who consider yourself to be jazz aficionados can prove your knowledge of America's only original art form besides reality television. (Note: taking this test is for amusement purposes only. You can not get PSU credit or win any money, so stop calling me saying that I owe you money, David.)

1. Which of the following would be considered important "Hard Bop" musicians?
A. Ice Cube, Dr. Dre, Eazy E
B. David Lee Roth, Eddie Van Halen, Sammy Hagar
C. Horace Silver, Art Blakey, Lee Morgan
D. Geddy Lee, Alex Lifeson, Neil Peart
2. What was the name of Dave Brubeck's very popular album from the 1950's?
A.  "Thiller"
B. " No Jacket Required"
C. "Time Out"
D. " The Chronic"
3. Which of the following is NOT considered a Cool Jazz musician?
A. Lennie Tristano
B. Chet Baker
C. Paul Desmond
D. Ryan Seacrest
4. Which of the following is TRUE about the "Birth Of The Cool" sessions?
A.  Original album title was "The Freewheelin' Bob Dylan"
B. First recording to have "Warning: Explicit Lyrics" Label
C.  First documented recording of Yamaha DX-7
D. Featured Miles Davis, Lee Konitz, and Gerry Mulligan
5. Which of the following would NOT be considered a jazz version of a tune?
A. Lester Young performing " I Cover The Waterfront"
B. Charlie Parker playing "Laura"
C. Karen Carpenter singing " The Rainbow Connection"
D. Wynton Marsalis playing "Caravan"
6. Which of the following is NOT true about trumpeter Clifford Brown?
A. Died in a car accident at age 25
B. Practiced constantly and was known for his huge sound and near perfect solos
C. Sold heroin to make money; was one of the biggest drug dealers on the Eastern seaboard
D. Was from Wilmington, Delaware
7. Which of the following is TRUE about Miles Davis?
A. When traveling in Europe, referred to as "kilometers" Davis
B. Went to study at Juilliard, but was more interested in learning from Charlie Parker
C. Came from abject poverty, grew up in a small village in Romania
D. Was known for his ability to tap dance while he played the trumpet
8. Which of the following is NOT a tune written by Thelonious Monk?
A. "Well You Needn't"
B. "Round Midnight"
C. "Blue Monk"
D.  "Macarena"
9. Which of the following styles was Dizzy Gillespie NOT known for?
A. bebop
B.  Latin Jazz
C. Bossa Nova
D.  Progressive Speed Metal
10. Which of the following is NOT considered one of the important bebop musicians?
A.  Charlie Parker
B.  Cyndi Lauper
C. Thelonious Monk
D. Dizzy Gillespie
11. Which tenor saxophonist influenced many cool jazz musicians and invented many hipster expressions, like "how does the bread smell?" (meaning how much does it pay)?
A. Boney James
B. Kenny G
C. Lester Young
D. Clarence Clemmons
12. What 1939 Coleman Hawkins recording is considered an antecedent of bebop?
A. " I Wanna Hold Your Hand"
B. "Body and Soul"
C. " Ice, Ice, Baby"
D. "Devil Went Down To Georgia"
13. What is the term for a new melody composed over an existing chord progression?
A. serendipity
B.  proscenium
C. supercalifragilisticexpiadocious
D. contrafact
14. Which of the following is NOT true about bebop?
A.  Some black musicians wanted music that "the white cats couldn't play"
B. Music was not for dancing
C. Many bebop musicians used heroin
D. Invented by Philo T. Farnsworth
15. What style of jazz includes fast tempos, virtuosic improvisation, and difficult harmonic structures?
A. alternative country
B. bossa nova metal
C. bebop
D. dixielandcore
16. Raymond Scott's music is known mostly for it's use in which of the following?
A. Theme music for "Charles In Charge" and "Joanie Loves Chachi"
B. the films of Brian DePalma
C. classic Warner Brothers cartoons
D. played at the beginning of the 7th inning of every baseball game
17. For which Big Band did Russian composer Igor Stravinsky write his "Ebony Concerto"?
A. Lawrence Welk
B. The Harlem Globetrotters
C. The One O'Clock Band at North Texas State University
D. Woody Herman
18 Which musician was known as the "Sentimental Gentleman of Swing" and had 286 Billboard chart hits?
A. Tommy Lee
B. Courtney Love
C. Kid Rock
D. Tommy Dorsey
19. Which bandleader was an important innovator of swing, featured Louis Armstrong in his band, and ended up being an arranger for Benny Goodman?
A.Mitch Miller
B. Grandmaster Flash
C.David Byrne
D. Fletcher Henderson
20.What event is considered by most jazz historians to be the beginning of the Swing Era?
A. 1453-Constantinople Falls To The Turks
B. 1607-Jamestown Colony Founded
C. Benny Goodman's performance at the Palomar Ballroom on August 21, 1935
D. 1543-Copernicus Claims That Earth Circles The Sun