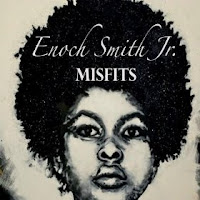 Enoch Smith Jr. is a young pianist(younger than me, anyway...) who originally hails from Rochester, NY. Although he went to Berklee College of Music, he considers himself self-taught and a church musician at heart. His debut CD, entitled "Misfits", is a strong debut, for a number of reasons. First, it's well recorded; the piano sounds warm and clear, and the mix makes it easy to hear the music. Second, the musical vision of the recording of the CD is cohesive and well-thought out. And it's an art CD; by that I mean the musical goals of the CD are noble, in that there's no gimmicks trying to "hook" people. It's a purely music driven endeavor. Third, the compositions are well-crafted, slick, and meaty without being overly intellectual. Smith is a fine pianist and takes great solos, and comps well, but he's not concerned with showing off; he has a razor sharp agenda, which makes "Misfits" a  pleasure to listen to.

Smith's band is a formidable one. Drummer Sangmin Lee and bassist Noah Jackson are solid throughout. I like Lee's energy and flexibility. Both he and Jackson are what we come to expect in our rhythm sections these days; technically accuracy, interplay ability, and the skill to play all styles from any era of jazz. This is a jazz CD, however, it's from a modern perspective. Lee and Jackson know how to play grooves which fall in between funk and latin with consistency and freedom.

I must admit that my favorite tracks are the ones which feature vocalist Sarah Charles. I met Charles two summers ago in Bern, Switzerland; She was performing with a group from the New School. I can hear why she would be someone that instrumentalists would bring into their group; whereas many singers have big, adorned voices which arguably fill up the space and hog the attention, Charles' voice is very streamlined. This kind of voice makes a better blend, whether singing wordless melodies, scat soloing, or singing lyrics, at least on this CD. Don't get me wrong, she's got power, and reveals her soulfulness on "Misfits" when necessary. But I like her subtle intensity.

The opener, "A Misfit's Theme", sets a great tone. I was reading that Smith felt like a "misfit" at Berklee because he didn't feel like he was up on the technical requirements of the college. The lyrics of this piece combined with the haunting F#sus to Fmaj7#11 repeating sadly reminded me of my own feelings of being a misfit. ( If you listen to jazz, you're a misfit. Welcome!)The mysterious nature of this section gives way to a bombastic new progression of Amaj, Abmin 11, Db maj9 and Dmaj9. (Yes, I got out my keyboard and figured out the chords. Don't all jazz writers do that when they review a CD? They don't? Because they can't hear harmony? Oh, my bad.....) Charles really shines on this one.

There' a nice arrangement of Duke Ellington's "Caravan", which is nicely swinging, but has a few surprises; in addition to impressive solos from Smith and Jackson, there is a very sudden loop of 3/4 in the ending melody which becomes a vamp for a drum solo. It's such a surprise that , at first, I was listening to this in my car, and I thought my CD player was busted! "She Move Me" is another strong instrumental track; here, Lee's drumming really reminds me of Eric Harland- a certain crispiness to his snare fills, and a certain precision yet loose interpretation. Smith floats nicely on this one. The latin tinge, and some of the chords, like the brooding F minor, Gb/F on the intro, remind me of Chick Corea(which, like Herbie Hancock, is a tough one to avoid as an influence.) Smith's touch is much darker and lighter than you would expect on a latin tune, but it makes it more pleasant to listen to.

There are two other guest vocalists on "Misfits": Saunders Sermons sounds enchanting on the Beatles' classic "Blackbird", and Mavis Poole sings strikingly on " I Won't Complain".  It's very hip of Smith to use his vocalists as he has on "Misfits". I've listened to this CD several times already and I highly recommend it. It's very mature and impressive as a debut and it makes me curious about  Mr. Smith and see what this young pianist does next. For more about Smith, see his site: http://www.enochsmithjr.com/