The Dark Side of The Beat 2: Update

I got a lot of reactions to my recent post("The Dark Side Of The Beat"). I think that the struggle of trying to book gigs at New York clubs really struck a chord, no pun intended. Here are a few comments that I received:

I feel you brother. You're fate at that club rests on the bartender not satisfied with the tip you left him. What a drag.

I have had similar experiences in other NY clubs....I'll have a killing night packed with people....everybody wins.....can't get another there....why? God knows....club owners are strange dudes.

I had sort of the same experience last week, it wasn't even my gig, but the A hole manager (not even the owner who loves having live music) started screaming about how they were losing money over paying us $250 for the band. I usually hold myself but I started going at him about how much of a loser he was and how we were playing there for the love of music, and if he couldn't make money out of a packed place with amazing location it wasn't because of the money he was paying us.

George, what's amazing is that you play all over the world have top shelf CDs and you are & play with top shelf players. It amazes me that club owners who want to build a business with live music have not the first clue about who they are getting.

So what are these club owners looking for? Whether it is a local club or the top tier places, how do we adapt our pitch to them for opportunity to perform to their expectations? What do they want?


And this was a good one from Jonny King. If you don't know King, he is a wonderful pianist and composer who worked with Joshua Redman in the 90's. He's also a lawyer, and he wrote an excellent book on jazz appreciation. But his comment was interesting.


I thought your rant was great and right on. I grew up playing at places like Bradley's and Basil's and Visiones, etc., and playing at them regularly. Two things made those experiences so important. First, the audiences (especially at Bradley's) were always filled with musicians. One time, at Bradley's not long before it shut down (maybe after it reopened after the fire?), I think Kenny Barron, Cedar Walton, Tommy Flanagan and Joe Zawinul were sitting at the bar at one time! Can you imagine anything similar today? A hang, or collective with that kind of magnetic vibe? Second, as just a regular-joe piano player, I had the direct relationship with the club owner/booker, whether it was Wendy at Bradley's or James Browne at Sweet Basil's or whomever. So I could just call and say, "I'd like to play with these guys", etc. There was no interrogation about what label, how will it be advertised, etc. Now, having been absent for some time and just returning to the scene, I really feel this new distance between the clubs and the musicians. It's not just that the contacts have changed -- that's gonna happen over time -- but that the criteria have. Some clubs are still great and respectful, but the clubs reflect a more diffuse, split-apart scene generally, where there's no sense of cultivating a community, a hang, where the musicians and the clubs are basically creating the scene. And forget our generation, but think of the generation above us. All those great piano players I used to follow around, and everyone else -- can you imagine how they feel? I don't know what the answer is, but I appreciate so much that someone who is out there, and indeed makes a living at these places, is willing to ask why the relationship has so soured with these clubs. We all bitched about it in the late 80s/early 90s too,  but there's no question that it's many times worse now. And yet the music lives on. Respectfully, pissed-offedly, and cautiously optimistically -

I thought that was a great summary of what is happening these days. It's nice to know that I'm not alone in my thoughts. I wish I knew what the solution was. Maybe part of it is merely speaking out in some form, not going quietly. As I've said, there are exceptions, like Spike Wilner of Smalls, or Peter Mazza at the Bar Next Door, or Cory Weeds at the Cellar in Vancouver: it's because they are musicians themselves, and they understand what it's like to be on the other side.

I wanted to update this because I actually received an apology from the unnamed curator at the unnamed New York club. I'm not sure if he read the blog, or if somebody told him about it, or if he just at an internal change of heart. He said that he realized that he was a little harsh and he didn't mean any disrespect, and that I was welcome to play there again. I was surprised, because you rarely get apologies these days. Of course, I accepted, and said no hard feelings.


But I think Jonny King was really on to something with the separation that exists in the scene: it seems like many of the people who book the clubs put up this wall between themselves and the musicians. As if they are the Wizard of Oz or something.( Nobody gets in to see the Wizard! Not Nobody, not no how!) But this could be partially caused by the fact that some of these places are so bombarded by the thousands of musicians in New York, that they have to put up a wall just for the sake of sanity. It's probably akin to if you had to answer every spam email you received every day: you'd go crazy after a few days.

I often wonder, if I curated a jazz club, how would I do it? How would I accommodate all the musicians who would ultimately be sending me emails and calling. I'll have to give it more thought, but one thing I do know is that I would try to avoid insulating myself from the musicians. I say this because I think that musicians can also be customers; even if you let the musicians in free, they will still drink and eat, and also they can recommend your venue to others, and the whole thing perpetuates itself. If you alienate "the cats", you are alienating the people who probably love the music more than the mere fans, definitely more than the tourists who populate these places. If there was more of a sense of "we're all in this together", then these clubs would never lack support. I think because of this current atmosphere of " I'm up here, and you are down there", I rarely see musicians hanging at the venues. Maybe I'm wrong; maybe the musicians don't support the clubs. I know I would be more inclined to drop a bunch of money at some of these places if I felt like I was "a part of things." I hate to say it in terms of "I only support the clubs that return my emails," but hey, if the shoe fits..... 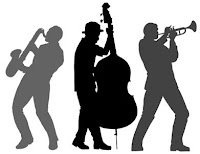