Jamie Baum's Latest: "In This Life"

If you want to make it as a jazz musician in New York, I believe you have to be somewhat versatile; you should know standards and be able to swing and play changes, but you also have to be able to read anything and play odd meters. You should have a sense of how to play "free" music, but you should also be open to playing music that you have absolutely no preconceived notions about! When I worked with flautist Jamie Baum's band, I could tell right away that I was going to be challenged musically beyond the known realms. I had years of great experiences playing with her groups of various sizes. After spending time with Baum's aggressively contemporary music, I knew I could play anything.

Jamie Baum is not only a strong relevant voice as a jazz composer, she is an excellent flautist; her tone, on flute or alto flute, is dark and rich. Her melodic concept is influenced by bebop and post bop but has a certain chromatic angularity which implies harmonic exploration. She's been on the scene for many years; I was recalling that the first time I worked with her was at Twins Lounge in Washington, D.C. in the early 90's. Originally from Connecticut, she's been in the Big Apple for almost two decades. Baum is a standout soloist and a confident bandleader, however, the group with which she seems to work most often is a septet with the instrumentation of flute, trumpet, french horn, alto saxophone, piano, bass, and drums. She features herself but isn't afraid to share the improvisational space.

Her latest recording, "In This Life,"(Sunnyside), is the third of a Septet Trilogy( the previous two 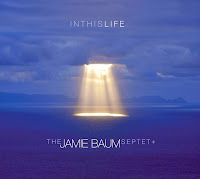 being "Moving Forward, Standing Still," and "Solace"). The CD is as expected mostly original compositions( with the exceptions of "The Game" and "Sweet Pain" which were written by Nusrat Fateh Ali Khan, an incredibly dynamic Pakistani singer). As Baum's music develops, her comfort with complexity seems to enhance her ability to be expressive. Snarky bass lines("Monkeys of Gorkana"), wildly inventive melody and harmony lines("The Game"), odd meters("Inner Voices", "While We Are Here"), longer unpredictable forms("Ants And Other Faithful Beings") and plentiful energetic improvisations all thrive here, but there are also distinctive, tuneful melodies and quiet moments. "In Another Life" is a beautiful ballad, which is gentle and thematic without being predictable. "Sweet Pain", with low flute and trumpet and exotic tablas of Dan Weiss(who happens to be one of the most unique drummers around) has a very tranquil, mysterious mood. "While We Are Here" is a actually rather positive tribute to Baum's cousin who died in 2010.

Baum's music in the past made much use of the 20th Century European classical music influence. "In This Life" has a more Eastern Tinge than previous recordings. However, this music is brought to life by Baum and her musicians, who are above all New York jazz musicians. Baum's husband, Jeff Hirshfield, has played with virtually everyone in Jazz, and is the skillful glue that holds all of the musical mishagos together. Alto saxophonist and bass clarinetist Douglas Yeats has been associated with Baum for many moons, and is one of the most exciting improvisers of whom you probably and sadly have never heard(check out his solo on "Richie's Lament"). I always love trumpeter Talyor Haskins conception; he's rock solid as a "lead" player and here he is featured as a soloist on "Monkeys Of Gorkana." However, another trumpeter named Amir Elsaffar is on the bulk of the CD; on the opening track, "Nusrat" he plays some wicked microtonal lines, channeling the South Asian sound (much like my former bandmate Rudresh Mahanthappa leans towards on the alto sax).  Guitarist Brad Shepik's ferocious solo on "Nusrat" makes me wonder why he isn't a household name.

Many of my students listen to the classic recordings- bebop, cool jazz, hard bop, Trane, what have you. But what about today's jazz? If New York is still the jazz mecca, then what are they playing in New York now? "Jamie Baum's "In This Life" is what New York jazz in the new millennium is all about.