A Christmas Miracle: My Review in the New York Times 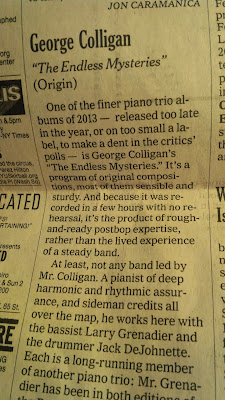 I'm still in shock; I recently found out that my CD, "The Endless Mysteries"(Origin Records) was reviewed by Nate Chinen in the New York Times. Furthermore, it turns out it's a really positive review. It seems like most of the reviews have been positive far, but this is a little bit different. The review in the Times is potentially important for a number of reasons. First of all, it's very hard to get the attention of the Times, and with all of the jazz musicians in New York, there is certainly no shortage of material that deserves to be written about. Secondly, I have noticed that certain artists seem to get a little bump of legitimacy after a Times article.( Now, if I were to get a feature article by either Chinen or Ben Ratliff, I would be planning a world tour.)Thirdly, it's THE NEW YORK FREAKING TIMES. (Even my accountant saw the review!)

Whether or not this review is a game changer for my career is unknown; as I said, a weighty piece in the paper of record has helped many artists to get more recognition. I'm hoping that this, as well as a forthcoming feature in Downbeat, will give me a boost with promoters and bookers. However, it might just mean bragging rights and not much more. The jazz business is still tough. I am still very pleased, and hopefully, all of this will at least be promotion for my New York CD release at the Jazz Standard on April 30; at this writing, the band on the recording (DeJohnette and Grenadier) has agreed to make the date.

In case you missed it, here is the review:


GEORGE COLLIGAN“The Endless Mysteries”(Origin)
One of the finer piano trio albums of 2013 —  released too late in the year, or on too small a label, to make a dent in the critics’ polls —  is George Colligan’s “The Endless Mysteries.” It’s a program of original compositions, most of them sensible and sturdy. And because it was recorded in a few hours with no rehearsal, it’s the product of rough-and-ready postbop expertise, rather than the lived experience of a steady band.
At least, not any band led by Mr. Colligan. A pianist of deep harmonic and rhythmic assurance, and sideman credits all over the map, he works here with the bassist Larry Grenadier and the drummer Jack DeJohnette. Each is a long-running member of another piano trio: Mr. Grenadier has been in both editions of the Brad Mehldau Trio, going back nearly 20 years; Mr. DeJohnette has spent the last 30 with Keith Jarrett.
Whatever the sum of all that experience is, Mr. Colligan made it work for him. Some of his pieces on “The Endless Mysteries” seem designed for these specific partners, especially Mr. DeJohnette, in whose band he has played. “Song for the Tarahumera,” a scrappy modal tune, becomes a roiling drum incantation. “Liam’s Lament,” a beautifully restrained ballad, features empathic rubato work by Mr. Grenadier. (It also features a theme played on melodica, an instrument that Mr. DeJohnette has favored on his own albums; I had to check to be sure that it was Mr. Colligan doing the playing.)
Mr. Colligan, who turns 44 next week, favors an earthy, assertive style, putting him in a lineage that includes McCoy Tyner, John Hicks and Mulgrew Miller. But he has other affinities, as he shows in a pair of spontaneous inventions provoked by the school shooting in Newtown, Conn., which claimed the daughter of a friend and sometime band mate. “Thoughts of Ana” is a softly chiming solo reflection, with a touch that brings Mr. Jarrett to mind; it leads into “Outrage,” which borrows a page from the Cecil Taylor playbook.
None of these moves feel calculated or rigid, because Mr. Colligan and his partners work so fluently. And while some titles sound like the sort of exhortations that Mr. Colligan might use with his students at Portland State University in Oregan —  see “It’s Hard Work!” and “If the Mountain Was Smooth, You Couldn’t Climb It” —  he doesn’t seem to be straining in the slightest. He’s past that point by now. NATE CHINEN