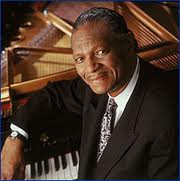 Wow, it's been a hectic December! The Fall term is over at PSU, juries are done, and final grades are in. I'm putting away my professorial sweater and changing into my jazz musician costume. Tonight, at the Mission Theater in Portland, I'll be performing with a top notch quintet. We will be presenting a tribute to the great pianists McCoy Tyner and Herbie Hancock. (If you haven't heard of them, then stop reading this and go back to listening to Wiz Khalifa.) The concert begins at 7:30 PM. The Mission Theater is located at 1624 Northwest Glisan Street. Tickets are $15. I'll be playing piano; the rest of the group is comprised of David Valdez on alto saxophone, Nicole Glover on tenor saxophone, Chris Higgins on bass, and Chris Brown on drums. In my view, these are among the best musicians in Portland and you should not make up excuses to miss this show!

I will admit, it is difficult as a pianist to make a tribute to two of the greatest pianists who have ever lived. The fact that both Tyner and Hancock have been huge influences on my playing makes it more challenging. I've actually spent years trying NOT to sound like either of them, and have been seeking my own voice as a pianist. However, as an educator, I think it's important to find the balance between study and creativity. Therefore, I welcome the challenge of playing the compositions of Tyner and Hancock, and hopefully, I can add my own path with the road map they have given me.

When I first started playing piano, my style was not what you might call pianistic; I played licks in my right hand which I had transcribed from trumpet players like Freddie Hubbard, Lee Morgan, and Clifford Brown. In my left hand, I had a few voicings which I pounded out with rhythms I had learned from listening to drummers like Elvin Jones and Max Roach. When I started listening to McCoy Tyner, I found that his approach fit well with what I was already attempting to do. I sounded so much like Tyner that saxophonist Phil Burlin wrote a tune called "Colligan's Groove" dedicated to my McCoy Tyner imitation! (It's on the first CD that I ever recorded as a sideman; you can even buy it here if you are curious as to what I sounded like in 1993.) 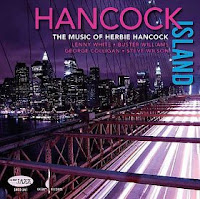 A few of the arrangements we will play tonight come from a CD I recorded for the Chesky label back in 2007. It's called Hancock Island(available here) and it features Buster Williams on bass, Lenny White on drums, and Steve Wilson on alto and soprano saxophone. Chesky is known as an audiophile label; they record everything live to two track with special microphones in specially treated acoustic settings. I think this CD came out well, although it was hardly promoted and most people have never even heard about it. It's one of the few existing documentations of a group which was actually Buster Williams' working band for many years.

I think one of the things you'll find interesting about tonight's performance is the juxtaposition of compositional styles. Tyner and Hancock are in some ways similar, but in some ways they are worlds apart. Both are able to get a lot of mileage out of simple melodic ideas and forms. However, Tyner has a lot more weight and resolution harmonically, whereas Hancock's tunes are lighter on their feet and leave more room for color and mystery (if that makes any sense). Both pianists began their careers as prodigious sidemen with great legends in jazz. Since they are considered contemporaries, I can't help but wonder if they influenced each other. if they were, it's not well documented; however, drummer Billy Hart told me that he mentioned to Hancock how much he loved Hancock's work on the Wayne Shorter album "Speak No Evil". Hancock replied, "Yeah, on that record....I was just trying to sound like McCoy Tyner."

I hope to see you tonight! In the meantime, here is a link to an article about the show in the Oregonian, and below is a link to an interview I did for Oregon Music News. Please come out and support live jazz in Portland!