I remember hearing a very well respected jazz educator say this about  "free jazz" alto saxophonist Ornette Coleman:" Yeah, I would like to listen to Ornette Coleman...if he didn't play so OUT all the time!" I remember thinking even then, the little I had heard of Coleman's music, that this sort of statement didn't add up. I don't hear Coleman's music as being "out" all of the time. I think much of it is tonal, and much of it is quite beautiful. Obviously, Coleman's music and concept doesn't work for everyone, and for a variety of reasons. Some people just don't like the idea of "free jazz"; in order to feel like the music has validity, the "chord changes" need to be addressed. And yet, isn't it interesting that most people, including some musicians, can't even hear chord changes? Harmony is the most elusive of musical elements. Most people can identify melody, rhythm, lyrics, form, and so forth; however, we need to study theory and ear training in order to hear even simple harmonies. So at a certain point, why are the "changes" so important?

Don't get me wrong; I love to play chord changes. And the concept of harmony, while elusive and abstract to many, is key(no pun intended) in many of the emotional moments of music. We say a major chord is "happy" and a minor chord is "sad". (Diminished chords are "annoyed", and Augmented chords are "cautiously optimistic." Ha Ha.....)Take the harmony out of a Rachmaninoff Piano Concerto or a Beethoven Symphony or a Bill Evans ballad and you have a completely different emotional experience. All this being said, we as musicians and music students spend a lot of time on harmony and playing the changes. And eventually, the more wrapped up in the pursuit of better "change" playing, the less attention we give to melody(we can't play the melody correctly of these tunes), rhythm(our solos become run on sentences of eighth notes, devoid of any phrasing or variety), lyrics(please, we have no idea that these songs even HAVE lyrics), and musicality(our music becomes flat and introverted, a mere exercise in plugging in our licks and scales into chord sequences. Oy, my students are going to be confused after reading this....). 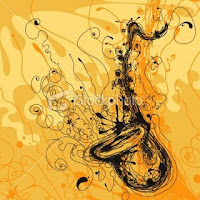 I recently gave a lesson to a bass player. I was trying to get him to make his walking lines more relevant and "outlining" the chords. I enlisted a guitarist who was practicing out in the hall to come in and play with us. I played drums, so we had a trio session. We played "The Days of Wine and Roses" a few times. Yes, the "spelling" of the changes got better, but the better it got, the less interesting the music became. We were no longer playing together;instead, we were all focused on form and changes, as if we were hunched over a desk working on a math problem.

So, I said, " Hey, you know what? We aren't communicating at all. We aren't making music. We are going through the motions. Let's just throw away the song, the chords, and the form, and just play free, and see what happens." Well, I'll be a monkey's uncle: the whole vibe of our little trio changed dramatically. Now that we didn't have this math problem to attend to, we could finally LISTEN to each other and make something happen. We played something that you might actually want to LISTEN to, that you might actually pay 99 cents to download it on Itunes! Now, my contention is that advanced players can make music regardless of whether the tune is no changes or Giant Steps in all keys. But forcing these students to play "free" was a real eye opener. 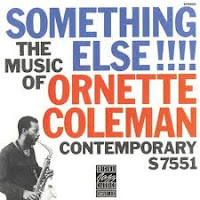 Getting back to Ornette Coleman; I recently transcribed a tune off of "Something Else!!!The Music Of Ornette Coleman", the first album from the then unknown saxophonist. The tune is called "Invisible". I transcribed it because Jack DeJohnette says he wants to play it when we play the Newport Jazz Festival next week. So I learned it and made a chart.(You can take a look here if you want.)It's a really cool melody, and what's really fascinating is that there are fairly conventional chord changes underneath the melody. However, it's a real clash between the solidly conventional bebop comping of pianist Walter Norris and the wild abandon of Coleman's alto shredding.

I had a SKYPE rehearsal with DeJohnette a few days ago, and we went over the tune, and talked about it a bit. "It seems like Ornette isn't playing these changes at all," I remarked. DeJohnette replied that "Yeah, well, Ornette was probably playing the changes but in a different key. I actually spoke to Walter Norris about it, and Walter said that on that when they were in the studio, Ornette told him:"Play the way you play.'" It's fascinating to hear this information from a source close to those who were making the history.

I think this is a great tune and I'm surprised that I don't hear people playing it more often. This tune should be in the fakebooks! I'm going to try to get people in Portland to add it to the repertoire. I think it's a cool tune because it does have that Ornette Coleman/Don Cherry vibe to it, but it's not that far off from being a bop, or hard bop tune, especially if you decide to address the changes, which are basically bebop changes without a clear tonal center. Many tunes are melodious on the surface, while the changes underneath are moving more fluidly than the melody might imply. However, this melody is really giving you the sense that every bar is a new key. And there's even a "shout chorus!" I can't say that I love Coleman's approach on this tune, but I think it's very musical, and he plays what he plays with a lot of energy. It is pretty "out". However, if it wasn't this way, it wouldn't be "Something Else!!!!" They would have had to call it "The Same Old Stuff"......or something like that.....