I've always been envious of musicians who come from musical families. It seems like they would have a huge leg up on anyone who didn't grow up with music around the house. And not just music, but music from the perspective of people who actually play instruments and who really care about the music, more than folks who are just occasional listeners. My parents were not musicians; they were both English/Drama majors in college. However, they did own some hip records; musicals like "My Fair Lady,""Damn Yankees,""Jesus Christ Superstar," some Beethoven Symphonies, assorted jazz like Bunny Berigan, Fats Waller, and Jonah Jones. My mother had Stevie Wonder's "Musiquarium". (They had some great comedy records, though: Bill Cosby's "I Started Out As A Child," "Wonderfulness,""200 Miles Per Hour," some Flip Wilson, Don Adams, Monty Python's Flying Circus, and some great Mel Brooks and Carl Reiner-their bit about the 2000 Year Old Man was a family favorite). Still, sometimes I wish my folks had been able to give me real guidance, more than just,"Hey, you should practice that trumpet because it's costing us 10 dollars a month!" If my parents were actually players, maybe I would be a much better musician now. It's all hypothetical, but that's my excuse, anyway.

I was thinking about this because this weekend I played with drummer Kush Abeday. He's a twenty- something year old from Washington, D.C. I remember the early 90's when I used to play many gigs with his drumming father Nasar Abeday. Obviously, having a father who plays the drums would at least increase the likelihood that their child would end up also playing the drums. Kush is a marvelous drummer, and plays so far above where most kids his age are playing. And Papa Nasar is an educator as well, but I sort of wonder how much he encouraged his son to play, or whether it's one of those things that just happened. Maybe it was a combination of both. Still, I would think that growing up and hearing your father play some hip drum stuff on a daily basis would rub off on you the same way that the words that come out of your mouth end up in your kid's vocabulary.(We have to spell our curse words now, so that our  2 and a half year old son Liam doesn't learn these words. He's got a pretty ridiculous talent for mimicry....)

I was also thinking about this because earlier today I played a little jam session with a young bassist from New Jersey named Adrian Moring. Adrian is the son of Bill Moring, who is a wonderful bassist; I played with him a handful of times in New York City. I remembered Adrian from his audition at Juilliard, where I taught as an adjunct professor for two years. Adrian is a really fine player, definitely a chip off the old block, so to speak. After the session, I asked him what it was like to end up on the same instrument as his father. "I always knew what jazz was, although I didn't love it at first," he admitted. "But my first word was Bebop...." ( It's funny because my son Liam knows what bebop is. I'll say, "Liam, sing Bebop!" and he goes "du ba du ba du ba du ba Du!")

Not all of the greats came from musical families. However, some of the current greats do; Nicholas Payton, Christian McBride, Joey DeFrancesco, Ralph Peterson, Buster Williams, of course the Marsalis family...this is just off the top of my head. I feel like musicians who come from musical families are always going to have an unfair advantage over those musicians who don't. I had to "discover" Clifford Brown and Weather Report in my early teens. If my parents had been jazz aficionados, maybe my whole career would have been different. And look even further back; look at the advantage that Mozart had: to have his prodigious talent recognized and nurtured by his father(Mozart began to study piano at 3 and wrote his first major composition at age 5). This was the complaint of his contemporary Antonio Salieri(well, at least in the film "Amadeus," his testimony reveals that Salieri's father did not care for music, and that Salieri was jealous of the fact that Mozart was playing concerts for kings while Salieri was playing children's games in a small town in Italy. But this movie is known for being very loose with the true history...). Unfortunately, Mozart's father didn't seem to be able to teach Mozart about LIFE well enough to keep him out of a pauper's grave at age 35.....

I know many musicians who don't have any expectation that their kids will play music. If they do, cool; if not, they'll figure out their own interests. I was around sailboats most of my childhood, and it never really worked for me the way it did for my father. I think he really wanted me to WANT to be a sailboat person, but I think he was proud that I became a musician, too. He was somewhat knowledgable about music, but he was not a musician. Although, I do remember that when I and my sister were very young, he would "improvise" tone poems on the piano. (He would just mess around on the black keys or white keys, in different registers, and make up stories. "There was a young princess," he would say, and then play on the higher white keys. "And she loved the fair prince," and then play middle register black keys. " But then they were chased by a MONSTER!" And he would rumble on the lowest keys of the piano. Not bad for a non-musician.) 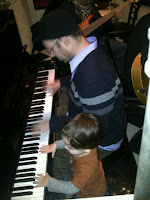 I have no idea if my son will be a musician. I just hope he's happy with whatever he decides to be into. Earlier today, we had our first attempt at a "family" jam session. Liam brought my wife Kerry's guitar into the living room and then brought his bongo drums and sticks for me to play. Then, while standing and randomly strumming the guitar, he sang "Old MacDonald Had A Farm". And then he said, "Mommy, you could play Daddy's trumpet!" It was incredibly adorable. I'm just amazed that he's making these connections. For the time being, his real passions are bulldozers, subway trains, and dump trucks. Still, maybe he'll be playing an instrument sooner than we might think. I don't mean to exaggerate, but he's even starting to compose his own songs. He has a song called "Happy." It goes like this:


He has another song that's called "Today". It goes something like this:


His latest work is entitled, "Dumping Out The Dirt." It's catchy:


I know I'm just being one of those annoying fathers who brags about their kid at every opportunity. (And those aformentioned "songs", while impressive, clearly still need work.And Liam can't really sing well, but hey, that's what Auto-tune is for........) Nevertheless, I would be thrilled if someday my son were a great musician. I'd even love it if he got all the gigs that I wished I had. Only time will tell.