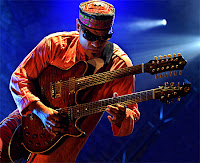 This is a continuation of an interview which I did with Dave Fiuczynski while we were on tour with Jack DeJohnette's band in May.
GC: So we were talking about Berklee …
DF: Yeah, and under President Roger Brown, Provost Larry Simpson, and just basically everybody else, Berklee has been very supportive of new ideas. I started teaching a microtonal ensemble, a groove ensemble.I just based it on simple Arabic, Chinese melodies or arrangements of Western classical quarter tone string quartets by Julian Carillo, or quarter tone piano pieces by Alois Haba. Arrangements of simple nonwestern melodies, microtone melodies, western classical microtone pieces, groove-oriented, getting used to playing the microtones either playing in a tonal system… but playing microtonally, and pushing against the chords, or actually having microtonal chords and playing microntone melodies on top, or just kind of using your ears and playing free. There’s a lot of different methods.
GC: You mentioned that Joe Maneri didn’t like microtonal music on keyboards?
DF: He didn’t like it. It was almost too precise on the instrument. He didn’t like the way it meshed. I happen to love it, though!
GC: Did he have reasoning for why? Was there sort of a philosophical idea behind it?
DF: It was the sounds. I don't know if he had the best sounds, you know. The DX-7 type sounds…unless you’re Prince, you can’t really make that stuff sound good.
GC: How do you balance teaching and performing?
DF: It can sometimes be a challenge. Berklee encourages the teachers to go out and get so-called field experience. At the same time you know, you can’t leave a semester.
To make up sometimes I have to get a sub or if there’s enough work I can take a semester off.
GC: How has fatherhood changed your outlook on music, working, creativity?
DF: You really realize where your priorities are. It’s changed my outlook on life, really there’s nothing better. Music is cool, but there’s more to life than music. But also when I’m playing music it’s really focusing on….where’s the meat, you know? 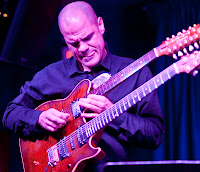 All the  dumb stuff you think about like, “Oh, do I need this new toy?” “Oh, I need to work on my chops”, etc… It’s really like, where’s the beef? Where’s the pocket? Where’s the salt, sweat, love? Tears? Where’s the melodies, where’s the space? Everything else is just not as important… if you break it all down , can you just play it on one instrument, is there a song there?
GC: Right.
DF: What's like for you?
GC: Well, that could be another blog….but I have similar notions to what you just so eloquently said.
DF:You get hungry because you know often you’re so busy. Often I get really hungry for music.
GC: Yeah, its true, Obviously playing with Jack DeJohnette’s band is really something special, But even so called lesser gigs are more exciting too, because I don’t take it for granted.
DF: And I don't’ take on bullshit gigs, you know?
GC: Right.
DF: I have no time for that. And I mean not necessarily gigs where the music isn’t happening, the bread isn’t that good , but also some serious opportunities. I think to myself, is that what I really need to do? I don't really need to do that. It might put a nice little chunk in my pocket, give me some more exposure, maybe. There’s good players on the gig and stuff, but maybe it’s ultimately taking me out of the zone I need to be in, you know?
GC: I wanted to try to reconstruct what we were talking about the other day in the car, we were talking about 12 tone music and…
DF: Oh, and we were talking about serialism and…
GC: Yeah!
DF: Overplaying and fusion.
GC: Yeah!!! Can you just tell me your thoughts about that?
DF: Well, in terms of fusion, I’m between a rock and a hard place, because essentially whatever I do is gonna go down as fusion. But I kind of feel like, my team sucks! You know what I mean?
GC: Yeah, right!
DF: You have a lot of really big names that overplay, you know? And that's where you can actually give fodder to the Wynton Marsalises and have them put it down, I have no problem- I love when people destroy it. I love it! But if you do 3 tunes in a row where you overplay, and then you don't do any ballads, in other words, do 7 tunes in a row where you overplay, it’s too much of the same thing. You get beat up. You’re numb! I hate it. In terms of teaching, I see the same problem with students. And some will say,”Well, you know, they’re young! They’ll out grow it!” No! I’ve seen people now that 25 years later they’ve still got “overplaying-itis” … it's a disease! We all have people we know who talk too much. We have some pretty nasty names for these people: Motormouth! Space invaders! And so on. Now if we don't like these people, why would we want to sound like these people?
GC: But how do relate fusion to serialism?
DF: Well, the context was this: a serious musician was talking about how 30 years later, here’s the next cycle of fusion players. And this musician actually said that the role of the guitar was-to play a lot of notes!  And I’m saying, Puke! No! Yuck! Wrong!
This ain’t G.W. Bush! By that, I mean that if you say something untrue over and over again people start to believe its true. No! It’s not musical, not spiritual, not creative, never was, never will be… it's a form of repetition that's not happening. Repetition is a tool, like Beethoven: “ah-ah-ahhhh” (sings the melody for Beethoven’s 5th symphony). Some people don't like Beethoven. But have you ever heard someone say, “You know, I listened to the 5th symphony, and Beethoven is  a genius and everything, but if I hear another ah-ah-ahh (5th melody) I’m gonna scream!” No, when people play too many notes, it’s not happening.
It's a very cerebral thing. What I wanted to say about serialism is this; I think the language is very rich. I find it interesting that you have rules written in where you have to change things always to balance loud with soft, and with orchestration as well, if you have trumpets, then you need strings. You have to change timbre, you have to change dynamics.  BUT it becomes static. I think that's where Western culture painted itself into a corner, with making everything so cerebral . When you think about Miles Davis, in terms of musicality, Miles is getting better and better over time almost like by default because there are so few players who put space in their solos, you know?
GC: But I mean, maybe it’s hard to teach how to leave space…
DF:I don't think so. I think you should just…encourage it. And you know another thing about my kid is like…. my 2 and a half year old understand everything… just bring it up in class, “you know its very important…“ everyone one talks about phrasing…
GC: Sure.
DF: And just say, you know, “you need space.” 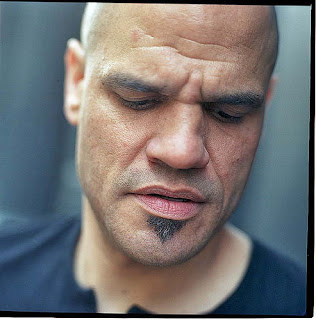