You Must Be This Tall To Play Jazz: The Superficiality Of It All

Some of you might be aware that my 41st Birthday happened yesterday.(FYI: unlike Elaine on Seinfeld, I would never scoff at a birthday gift of CASH....) Now that I am securely in my 40's, I started to think about the fact that I am no longer even close to being a musical young lion anymore. And yet, I'm playing as well as I ever have in my life. Yet the conventional wisdom (correct me if I'm wrong) seems to be that once you pass a certain age, your usefulness in the music industry is arguably null and void. Why?

I am constantly saying that music should always be judged by what it sounds like rather than what it looks like. (One of my favorite comedians, Lewis Black, has a brilliant routine along these lines regarding MTV, and how " music goes in your ear, and video goes in your eye! " He also astutely obseves," MTV is to music what KFC is to chicken!") While every other aspect of our culture has succumbed to the lure of making sure it celebrates the youthful and the sexual, I am more disappointed when this occurs in jazz music. And this is not just because jazz happens to be my life's pursuit.

I think jazz music should be held to a higher standard. Why? Because it is no longer popular music in the way that Taylor Swift and Lada Gaga are the popular music. Therefore, it is already a niche market. And I believe that those in that market are more sophisticated already to make their musical listening choices in a mature way: by actually LISTENING to the music! Lady Gaga and Taylor Swift are marketed towards teenagers who are easily swayed by peer pressure and pubescent hormonal insanity. I believe that the majority of jazz listeners are adults and listeners, and wouldn't be swayed by external forces. Or shouldn't be.


Furthermore, there is also the trend of focusing on the super elderly in jazz. While this is in many ways quite noble, it's still not based on anything real. It's sort of like jumping on the bandwagon at the last minute.  For example, Joe Henderson was ignored for years, even when he was playing his butt off and making great music. Then, it seemed as though once he hit his 70's, all of a sudden the jazz business came out of the woodwork to give him some respect. (Let's not even talk about those who don't get noticed until they are, ahem, deceased....)

Again, it seems like if your between 30 and 65, the jazz powers-that-be have very little interest. If you think I'm completely off base, ask a jazz musician you know and let me know what he says. In fact, ask Roy Haynes, who, as I was told by one of his former band members, was always mystified by the accolades he got as a senior citizen, while he had been playing his ass off for decades prior.

But whether it be age, looks, race, nationality, religious views, back story, shoe size, height, hairstyle, or number of parking tickets; none of these things interest me when it comes to music. Music is sound. Call me crazy, but I don't think it should be judged by anything else. Would you judge a Picasso by how it smells? Would you judge a novel by how it tastes?( On second thought, my one year old son is trying to EAT one of his books at the moment.....Liam, no......)

If you want to comment, do so respectfully and thoughtfully, please.
Happy New Year! 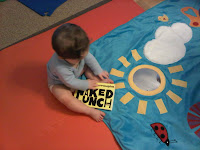