This is not a blogpost so much as a recommendation to check out a thread regarding freelance classical musicians in New York City. I am posting this because I believe the same issues apply to jazz musicians as well. I wouldn't be surprised if that topic applied to jazz musicians was either soon to follow or it's probably been done many times over.

The comments are telling, in terms of the wide range of viewpoints, on how do deal with the lack of gigs for freelance classical musicians. Some people think that the opportunities are there, it's just a matter of ingenuity and self-promotion. Others blame the cultural decline of our nation and so forth. I think we can agree that any music that does not involve booty shaking or rappers on a mother-f^&#*ing boat is not doing so well these days. 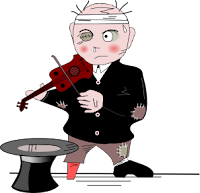 I have to admit that I personally have issues with my own involvement in Jazz Education at the university level. My ethical dilemma deals with these kinds of issues: how can I teach students in a pre-professional environment, knowing that their chances for a career in music seem to be dwindling? Especially when part of my reason for teaching full time is because the freelance jazz musician's plight of living gig-to-precarious-gig does not present any stability for a family?

Part of how I deal with the dilemma is honesty. I constantly tell my students that if you really want to be a musician, you have to work hard, but you need to really, really want to be a musician above anything else. And that is because you are essentially making a choice between finding something you love doing and being rewarded by creative achievements, or finding a job that will pay you well although you might hate your life for 40 hours a week.

Anyway, I thought some of the comments were interesting. There is one I found fascinating in regards to audiences and classical music:


A key reason for the slow demise of classical music is the widespread insistence -- within the classical music community itself -- that any newly composed pieces must be "atonal" to be worthy of performance.

Audiences, of course, have steadfastly disliked "atonal" music for a century; its proponents' almost messianic belief that this will one day change is sheer fantasy.

But as a result of this attitude, audiences are usually forced to choose between the same old roster of dead composers (which must eventually get somewhat boring, no matter how good they are), and music that the audiences simply don't like.

No wonder they switch to pop music.

And also, check out the last comment from the wife of avant-garde bassist Henry Grimes. Obviously a lot of passion regarding this subject....