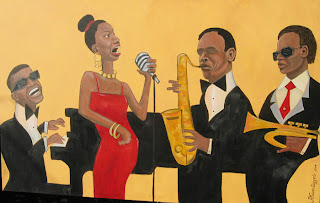 I'm posting this little conversation I'm having with a reader who posted anonymously regarding a bad gig experience he had recently. This is a common issue that rhythm section players have with playing for singers.


I'm a bass player. I did a gig last night with a singer that didn't bring her book. She called tunes in different and obscure keys. I didn't do to well.
The drummer told me it's not my fault. He said when you work with a singer for the first time, she needs to bring her book and have a set song list.
I thought it's my fault regardless because my 'ears' weren't big enough to fake through the tunes. Will somebody comment on this. So did I lose this steady gig because of my weak ears or she didn't bring her book? 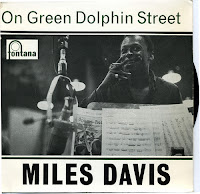 Anonymous bass player: I think it's a combination of things, which is often the case in jazz. I believe that singers SHOULD have charts, especially if they have a lot of obscure tunes and weird keys. HOWEVER, I think you have to develop that skill set at home of being able to transpose tunes on the spot. Now, if somebody asked me to play Chick Corea's You're Everything in another key, I might have a hard time, but standards should be manageable. The way I do it is to think of the theory. For example, If the tune is Green Dolphin Street, instead of thinking:

It's better to think:

Do you see what I mean? Roman Numeral Analysis is something that classical music students do in theory class. I think it's very helpful for jazz players, maybe even more so, because we actually have to know what's going on harmonically.

While having better ears helps as well, it might be a question of understanding the theoretical analysis behind the standard tunes. This sort of analysis works well with all the tin pan alley stuff. It might be tougher to analyze  something like an obscure Wayne Shorter tune this way, but it is possible. I think this way is easier than just straight transposition, although that's a good skill to have as well.

But this doesn't let the singer off the hook! Singers are notorious for just showing up and expecting everyone to fall in line by some magical means. Back in the 90's, I was involved in a workshop with legendary vocalist Shelia Jordan. This was her mantra: singers, get thy charts TOGETHER! Pay someone to help you if you must. It makes showing up to the gig a whole lot easier. Yes, we should all know tunes and so forth, but you'll save time and your band will thank you. It's a two way street.

I actually believe that this has changed a lot due to the amount of singers that come out of jazz programs now.  Many of the vocalists at the University of Manitoba are well prepared, thanks to instructor Anna -Lisa Kirby getting on their case!

Anonymous, another trick is to stand BEHIND the piano player and watch his left hand. You'll notice that Oscar Peterson and Ahmad Jamal always set up that way with that idea in mind. It makes it easier to change up the harmony spontaneously. But in this case, you might be able to follow along.

I hope this helps. I remember what a rude awakening it was when I first started dealing with singers. But sometimes a rude awakening will kick your ass to get into the shed and practice. Sometimes the desire to avoid embarrassment can highly motivate.