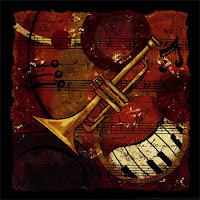 Here's a question that just came in through my facebook site:

Hey George, I was just wondering, do you practice patterns as abstract...well, patterns, put through various scales, for example, or do you pick licks that are made of patterns and apply them as you would any lick?  I feel like I am working on patterns a lot and never getting any of them out on the spot...
Sincerely,
Alexis Deighton Harrison

Alexis, it's interesting that you should bring this up. This is a very common issue, and I've dealt with similar questions here on jazztruth. I am constantly trying to figure out ways to help my students with this problem. I was thinking about doing a post on this; your letter is giving me the extra motivation.
(BTW, Harrison is a fine guitarist from British Columbia, Canada.)

The analogy I always make is comparing jazz vocabulary(which is essentially what we are trying to develop) to spoken language. Let's say you want to learn a second language. You might initially start out with a Berlitz book with "common phrases". You memorize maybe a handful of those. You might not even understand the grammar in each sentence or phrase. You have short ideas that you are trying to memorize. Hopefully, you are able to associate that phrase with the corresponding translation in your principal language. If you imagine that there is a file in your brain's "computer" that holds the English phrase "I am fine", and you are trying to learn how to say the same thing in Japanese, you would learn the phrase, "Genki Desu." Then, you would "file" that phrase in the same folder that contains "I am fine." This is because when someone asks you "Genki Desu Ka?", you will need to have the same need as when someone asks you, "How are you doing?" And in order to communicate in a natural, spontaneous way, you need to "know"the phrase and exactly what context it is used in.

Let's say you are in Japan now, and you meet five different friends throughout the day. The first time someone asks you, "Genki desu ka?", the process begins slowly. You have to hear the sounds and translate them into, "How are you doing?"Then, you have to translate "I am fine" into "Genki desu". You might not remember it at all, and you will have to pull out your Berlitz book, find the page that says "Greetings and Salutations", and then find "Genki Desu." The process will happen faster each time you meet someone and have this conversation, so that hopefully, by the fifth person you meet, you will INSTINCTIVELY say the answer to the question in Japanese at the appropriate moment.
At that moment, you won't be fluent in Japanese; however, within that microcosm of "Genki desu ka?", you will be fluent enough to be understood for that moment.

You just have to repeat this process with many different phrases over the course of months or even years to be "conversationally fluent." If you are thinking about writing a novel in Japanese, this might take a good number of years before you are able to "think" in Japanese well enough to communicate on a level that is sophisticated enough for native speakers of Japanese to understand and accept as great writing.(Let's not even get to the Japanese written language! There are three writing systems: Kanji, Hiragana, and Katakana. All I can say is good luck with that!)

I'm trying to make the point that learning jazz vocabulary is very similar in the following ways. One, you have to learn one phrase at a time. When you "learn" a phrase, there are these different levels of knowing it. You want to be able to play phrases and licks INSTINCTIVELY. This takes time. Just as in language, there is the learning, the analysis, the memorization, and the application. Only then will these musical ideas become part of you.

I think at the beginning stages, just like with languages, you have to force it a bit. You work with what you know, and use the known as often as possible to reinforce it. Say you have a chapter in a Japanese language book called "Getting Around Tokyo." At the end of the chapter, you might have a sample conversation where someone asks, "How do I get to the train station?" It's a sterile conversational environment. You force the words and phrases that you learned in the corresponding chapter to fit the situation. In jazz, let's say you are working with one bar ii-7 V7 patterns. Maybe at the end of that "chapter", you would work on John Coltrane's "Moment's Notice" and fit each pattern into the chord sequence. It's sterile and unmusical, but it teaches you a skill. Further down the road, when the skills are more developed, the skills become ART. This is the goal, to make all of the chord scales, licks, patterns, phrases, quotes, etc…..into a musical, artistic statement.

This takes much time and patience, and the only short cut is either to step up your practicing, or already be a genius! For example, when I used to travel to Spain, I really worked on speaking Spanish. I never took a class; I bought books, studied on my own, and then tried to speak in appropriate situations. I could have very basic conversations; I had friends with whom I only spoke Spanish. (Don't ask me to speak Spanish now; my skills have drifted away…) Now, should I have expected in one year's time to be able to write poetry in Spanish on the level of Pablo Neruda? No way! In this sense, we need to have perspective. Don't expect to be Coltrane tomorrow.
However, I hope this will give you insight into what you need to do. I'm including an extremely basic pattern exercise that I left for my Bebop ensemble at Portland State University. (Let's hope they looked at it.) I made it so each phrase should be analyzed, learned in all keys, and then be "plugged in" to random chord sequences. I "named" each phrase; hopefully the students will have a name association with each phrase so that when they see "Up 9" or "Down Scale", they will recall the pattern and be able to apply it. Again, this is FORCING the licks. But that is the first step. Eventually, these things become INSTINCT.

Below are the patterns and then a sample test. Let me know if you think I answered the question. And I'd love to get feedback or other thoughts on this issue. 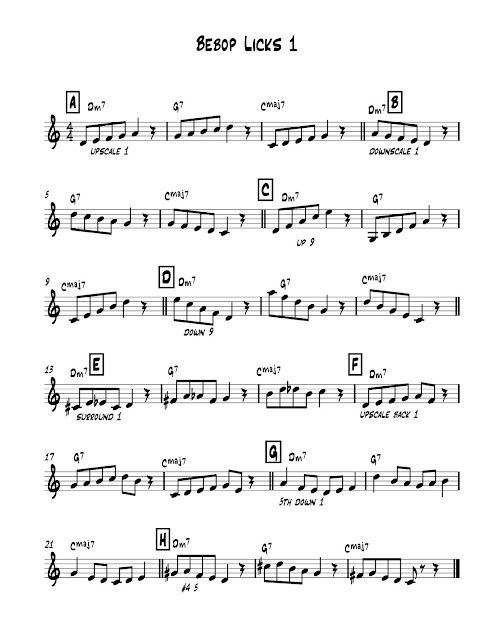 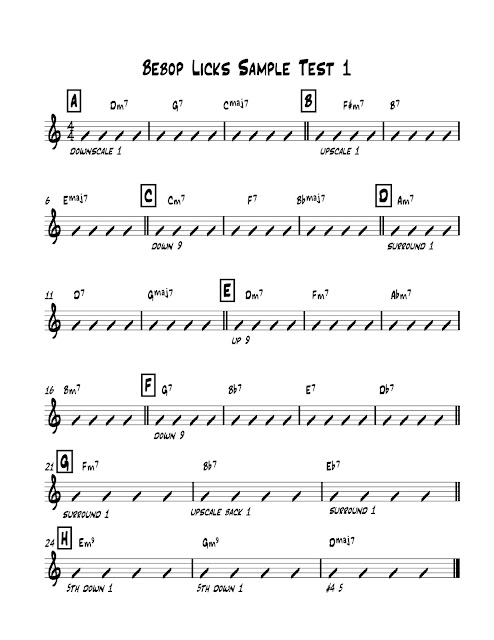