New York is still by default the jazz capital of the world. However, there are great jazz musicians everywhere. Many of them are in the Pacific Northwest(like me, for example. Oh, that's messed up.....). A great trumpeter (I've been fortunate to play with him a few times since I moved out to Portland) living in Seattle is Thomas Marriott. He's not only great at playing the trumpet and improvising; he's a great bandleader and arranger. One of his recent recordings demonstrates all of these things well. It's "Crazy: The Music Of Willie Nelson"(Origin Records). You might be saying to yourself the same thing that I initially thought:"Jazz musicians playing Willie Nelson's music? Now I've heard everything!" 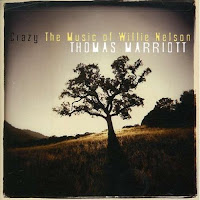 Full disclosure:I am not a Willie Nelson fan, and I'm not terribly familiar with his music. A few of the better known tunes on this CD("The Great Divide", "Crazy", "On The Road Again")I recognized. But whether you are a die-hard fan of Nelson, or you've never heard of him, you'll have a lot to listen to on Marriott's album. Remember that jazz musicians playing pop songs is not a new idea. Jazz musicians can take any material from A to Z and make it into something interesting. Marriott has done just that.

Marriott's trumpet style is very clean and pristine; he's got a perfectly round, dark tone, and his tone is consistent in the low range through to the high range. Marriott has a lot of facility but never shows off.
There's a lot of use of reverb and effects, like in the opening track, "Phases and Stages,Circles and Cycles." Sometimes, Marriott will use a harmon mute(Miles Davis is known for his harmon mute playing), like on "Everywhere I Go". But the heavy delay effect on "On The Road Again" gives Marriott's trumpet tone a very expansive sound. Marriott's tone is really dark and lovely when he plays flugelhorn on "The Great Divide".


Marriott picked some great players for his project: Mark Taylor on alto and soprano saxophones, Ryan Burns on keys, Geoff Harper on bass(I assume it is not the bass player from Baltimore also named Geoff Harper?) and Matt Jorgensen on drums. Much of the album goes into a fuson/rock territory, and Jorgensen keeps the intensity up; on "You Wouldn't Cross The Street To Say Goodbye", things get heated with a Bitches Brew-ish solo by Marriott. Jorgensen keeps it going while Taylor works it out over some cool synth and rhodes comping by Burns.

My favorite track is "Crazy"; it begins very simply(although Burns keeps his effect pedals for the Rhodes turned on , which maybe hints that there is some mischief in the works.) On the second time through, things really do go crazy; what started as a country 12/8 becomes a sort of Willie Nelson meets Ornette Coleman meets Miles Davis' "In A Silent Way". It's kind of a broad, literal joke, but I got a kick out of the cleverness of it.