So, after my three whirling weeks in Europe in May, it was nice to be home to see my family and do some laundry. However, there was still traveling to be done: this time, Birmingham, England was the destination. I was asked to teach and perform at the Birmingham Conservatoire with drumming phenom Jeff Ballard. I was thrilled and honored to be thought of in the same company as Ballard, who is known for his work with Chick Corea, Joshua Redman, and Brad Mehldau. We were scheduled to do a four -day stint at the beginning of June; and so, I packed my bag once again, headed to JFK, and boarded the Virgin Atlantic flight to London Heathrow Airport. At least this time, I would be mostly in one place, although I would have one extra day in London; the extra stay-over made the airfare a lot less.

The planning of this little excursion was actually two years in the making, thanks to the efforts of two English gentlemen: Jeremy Price, who is the head honcho of the Birmingham Conservatoire, and Tony Dudley-Evans, who is a promoter in the region, and also curates the great Cheltenham Jazz Festival. I knew Dudley-Evans from when I played in Birmingham for the first time with clarinetist Don Byron years ago. Dudley-Evans booked my quartet at Cheltenham in 2003, which was a blast. I met trombonist Jeremy Price at a week-long clinic in Denmark, where Ballard was also an instructor. Price and Dudley-Evans thought that Ballard and I would make a good teaching combination.

The theme of the week was "improvising interactively". The focus was somewhat on the rhythm sections; Price asked Ballard and I to talk about how to play while listening to others in the band. I thought this was a great idea, and this sort of theme always leads to other themes and tangents. So, with this in mind, it wasn't hard to come up with things to say. The first day in Birmingham, after a bus ride from Heathrow to Birmingham, checking in to my hotel and getting a long nap, I headed over to the school for a masterclass. I was alone on this one, due to Ballard's flight being delayed in Lisbon. (He was on a gig with Joe Lovano.) Right away, I was impressed by the attentiveness and humility of the students. And the overall musical level was pretty high. Clearly, most of these students already had a good feel for jazz, and could play well over basic tunes. I played with the students and answered questions; it was pretty smooth and it got us off to a positive start.

One thing that was interesting about the week was hearing so many different English accents; the students were from all over the U.K. At times, it was actually hard to decipher, but eventually, my ear adjusted. And I started to think my own accent sounded weird (I'm not sure if I have a distinguishable accent. Most people can't tell where I grew up, past the United States. I grew up in Columbia, Maryland, a suburb of Baltimore, while my Mom and Dad were from East Orange, New Jersey and Brooklyn, New York, respectively. But I think if I lived in England, I would probably, much like Madonna, end up sounding British after a while.)

Jeff Ballard finally arrived the next morning, and so he ran the morning masterclass, while I merely played piano. After only playing one tune with Ballard, I lamented that over the years we had not played together much(we did play with Mark Turner once and then he subbed in my organ trio at the Cork Jazz Festival years earlier). Ballard is one of the most musical jazz drummers out there; he plays very organically, and has great control over dynamics and sound. He's always listening and reacting; it's a very pure approach. It can be unpredictable, but in a good way, because Ballard always has an open mind as to what can happen next in the music.

Ballard is a natural teacher as well. He has a lot to say and is very passionate about the music. He knows the history and also knows about world rhythms and different genres. He's also aware of the harmony and the melody. The students were very receptive to Ballard's comments and ideas.
Jeremy Price was trying to make sure that as many of the student as possible got the chance to play with Ballard and yours truly. I think it can be meaningful for students to get a memorable musical moment with very advanced players. Hopefully, it will be a sort of "A-HA!" moment in a player's development. I know I've had a lot of those moments over the years...

Ballard and I rotated listening and playing with the small ensembles later in the day (and more over the next few days). The plan was to narrow down the ensembles that would get to perform on the final concert. There were six ensembles, but only three spots. I actually thought that everyone should get to play, but that probably would have taken up too much time.(We ended up with four ensembles in the end.) Again, there were a lot of talented, hard working students, but we were able to narrow it down based on the ability of each group to play together in a mature, musical fashion.

One night, after some spicy Thai food and Thai beer(well, there was no spice in the beer), we headed over to an Irish bar called The Spotted Dog, in a neighborhood called Digbeth. There was a pretty intense jam session, which was organized by a saxophonist named Michael Fletcher and a jazz enthusiast (and actor) named Miriam Edwards. (Fletcher and Edwards are also involved with something called Rhubarb Radio; I ended up doing an interview for their show at the end of the week.)The bar was packed to the gills. Ballard and I played trio with a local bassist. The level of enthusiam was quite high, from the musicians sitting in as well as the listeners.

The final day of teaching, we selected which groups would perform. Some of the groups had their own originals, while others learned some arrangements that I had made up on the spot. It was shaping up to be a satisfying concert. Before the show, I went back to my hotel to change clothes; unfortunately, the mechanism on my hotel room door ceased to function! Hotel employees were forced to drill into the side of the wall in order for me to enter the room and get my concert attire. I cut it close, but I was able to shower, change, and still make the concert on time.

After the concert, there was another jam session at a little bar next to the hotel called The Yardbird, which was another fun hang; I sat in on drums and keyboard, and I jammed a bit on the melodica as well. I was impressed at the vibrant nature of the Birmingham scene. Some of the students remarked that Birmingham as a jazz city doesn't get the proper attention, since it is so close to London. I suppose it would be like comparing New York City to Baltimore, in terms of size and music scene. And much like New York, London is so expensive to live that it can prove daunting for young musicians to try and move there to seek their fortunes. Still, many of the young players in Birmingham were ambitious, and I hoped that they were inspired and gratified by the week's lectures and musical interactions.

I had two extra days in the U.K.; on Friday, Fletcher and Edwards showed me around Birmingham a bit, and we returned to the Spotted Dog for a quiet evening of getting hammered on beer and Irish whiskey. The next morning, I took a train to London, and a friend of mine, who I previously knew only from Facebook, offered to show me around Hyde Park. It was a leisurely end to my British excursion, and I anticipated a return visit in the hopefully near future. 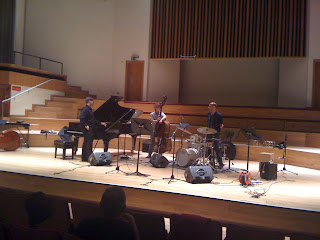