If you are a jazz fan, you've probably read something by Ted Panken in the last few decades. Panken writes often for Downbeat, Jazziz, and also has written many liner notes. Originally from Manhattan, Panken broadcast on WKCR in New York from 1985 up until 2009. Panken is a writer I really respect because he knows and loves the music. I was fortunate to convince him to do a "drop the needle" for jazztruth. (BTW, "drop the needle" has nothing to do with heroin addicts running from the police. It refers to the "needle" of a "record player", something we used to listen to music years ago before all of this wonderful digital technology…) Panken basically nailed it, and made some insightful comments about the music, as was expected and desired. (Note-some of the tracks listed have youtube links, so you can listen along...) 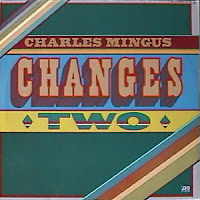 TP: Mingus. This is the opening track on either CHANGES 1 or CHANGES 2 from 1974 or '75. Great melody and arrangement. One of my favorite Mingus bands, and certainly the one I saw most often -- 10-11 times, both in New York and Chicago. Great sardonic line... It's the band that introduced me to Mingus, with George Adams, Jack Walrath, Don Pullen and Dannie Richmond, each a rugged individualist and team player -- they play the charts properly (well, all of them had played in bands for years before joining Mingus) and let the soulfulness come out when it was time to solo. One of his most competent as well as most inspired bands. Maybe the title is "Remember Rockefeller at Attica." George Adams was such a great interpreter of Mingus' music...such a soulful, cogent, individualist. I dig the way Don Pullen digs into his solo, starting inside the harmony and swinging, and then transitioning into his signature percussive, speaking-in-tongues-on-the-piano, quasi Cecil Taylorisms. I miss both of them. Dannie Richmond, too -- so insouciant and in control. I miss personal sounds and unorthodoxy and university of the streets finishing schools... No Wally Cleavers need apply! 5 stars. 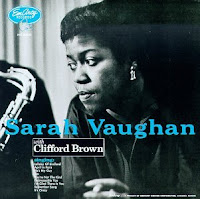 TP: Sarah Vaughan, "Lullaby of Birdland." I know this track, of course. It's so iconic, it's hard to talk about without resorting to what everyone knows -- her voice is like an instrument, and she can anything she wants with it; he swings like a gate, etc. Brief piano solo by Jimmy Jones, I think, then Roy Haynes starts a series of exchanges with Sarah -- flute (can't remember who it was...maybe Herbie Mann), then Paul Quinichette in his light, quasi-Prez style, then Clifford Brown. Sarah's responses are musical, and she seamlessly segues back into the lyric.Anyway, it's perfection. Nothing else to say. This was a working trio (Joe Benjamin is on bass, I think), and I believe they'd toured a lot in 1954, when the recording was done. My two favorite Sarah recordings are for Roulette, one with a big band led by Benny Carter, the other an intimate date with George Duvivier and a pianist whose name escapes me right now. Both are around 1960-1962, when she was in her late thirties, and her chops and taste coexist in equal measure. 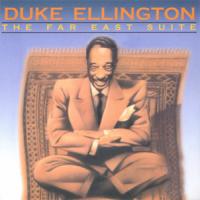 
TP: Ellington. The piano trio intro first made me think of Money Jungle, but it's definitely not Max on drums, and the bassist is keeping the groove -- no "kill the father" here!! Intoxicating, exotic theme. I feel I know the melody, but I can't identify it. Love Ellington's left hand...just an incredible statement, and tossed off with utmost savoir faire and casualness. Then the saxes-against-brass come in. What an amazing sound -- I never get tired of Ellington Orch. ensemble passages. Certainly sounds like the latter '60s or early '70s, when Ellington was working with a broader template of rhythms... Plus, I'm more inclined to identify the drummer as Rufus Jones than Sam Woodyard. Ok, here's the tenor solo (2:10). Tonality sounds a little darker than Paul Gonsalves, which makes me think it's Harold Ashby....but then on the other hand, the passages from 3:05 to 3:15 seem to me to be more characteristic of Gonsalves...so I'll go with Paul Gonsalves as the tenor soloist. He plays off the band so beautifully. Somehow, I'm thinking of a reharmonized-refracted "Satin Doll" meets "Girl of Ipanema"... I love Ellington's long closing trio restatement, the way he addresses the Spanish tinge. I don't recall anything on the Latin American Suite that sounds like this, nor on the New Orleans Suite... Maybe it's from the Far East Suite. Whatever the case, it's yet another Ellington masterpiece. 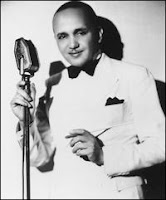 TP: I don't recognize it, but given the shifting themes in the beginning, and the programmatic feel, not to mention the sonic quality of the recording, I'm assuming it's one of Jelly Roll Morton's mid-'20s sides in Chicago by the Red Hot Peppers. Wait...that bad-ass trumpet or cornet solo is Pops...or not? I don't recall any Hot Fives or Hot Sevens with that level of onomatopoeia -- or, for that matter, ensemble sophistication. Is that a bass sax playing that little repeating motif? (1:46 & 1:58) Hmm... then it might be King Oliver's Creole Jazz Band, in which a bass saxophonist named Charlie Jackson played. That band had similar ensemble values. The banjo is swinging -- Johnny St. Cyr? However, I'm not hearing the two cornets too prominently in the ensemble. The Jelly Roll Morton and Creole Jazz Bands aren't stamped in my muscle memory, so to speak, so I'm in a quandary. 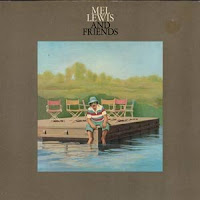 TP: Charlie Parker's "Moose the Mooche." At first blush I thought it was from the 1979 recording GROOVIN' HIGH (Muse) with Hank Jones, Thad Jones, Charlie Rouse, Sam Jones & Mickey Roker from the "Groovin' High" album, which I think I know well...but then I realized that they didn't do "Moose the Mooche" on that date (he recorded it in the late '70s with the Great Jazz Trio for Japan and also for Muse with George Duvivier and Ben Riley). But also, the time shift on the trumpet solo -- sort of quasi-funky -- would make me doubt myself immediately. Nor do I t think Thad would quote "St. Thomas" at the top of his second chorus. Nor would Thad Jones emphasize the rhythm changes over the melody -- he'd be reharming it at the very least. Nor do I think Thad would get into that high note stuff -- it's more reminiscent of Jon Faddis than Thad. The tenor saxophone solo is sturdy, some virtuosic stuff around 2:35-2:50 -- very notey, sounds almost Breckerish, but I have no idea who it is. The bass pick-up dates the recording to before 1985. Now, the pianist could be Hank -- nice left hand, very witty, clever quotes, nice flow, extremely slick and urbane. What he's playing around 5:15-5:20 convinces me that it actually is Hank. The trumpet blast around 5:30 tells me that it's Freddie Hubbard -- can't be anyone else. He reinforces that at 5:50. Not Freddie's greatest effort here -- lots of chops, not so much content; the opening solo was sloppy. Faddis would have played with a more Dizzy-ish bent. Unfortunately, I'm not nuts about the bass solo (the bassist sounds bored) or the concluding drum solo -- I like a little more snap-crackle in my bebop...that goes for the drummer's time behind the solos. The whole thing sounds kind of dated, except Hank, who was always fresh and on top of things. 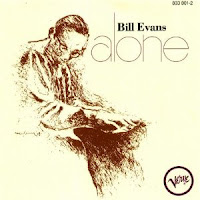 TP: Solo piano. Makes me think of Bradley's third set, 2 in the morning. My first instinct is to say Bill Evans -- something about the touch and the voicings. I feel I should know the melody, but the title just won't come to mind...one of those hard-edged-yet-sentimental West Coast songs that I recoil from in the movie but get involved in when I hear a master improviser work with the harmony and remove the cheese. Actually, I think it's "A Time For Love". Johnny Mandel. In any event, I'm quite sure it's Bill Evans, and it's a tour de force. He spins such a poetic, logical web. Don't know what album it's from, though I'd guess 1967-70 as the period when he recorded it...this sort of song was topical then. 7."Teach Me Tonight"; Sammy Davis and Count Basie, Our Shining Hour (interesting note: recorded 1965, but Davis re-recorded his vocals in 1973 and then it was released)

TP: "Teach Me Tonight" by Sammy Cahn. Got to be the Atomic Era, New Testament Basie Band. With Sinatra...or is it Sinatra... Around 1:15 the timbre doesn't sound resonant enough to be Sinatra...and I think it's Sammy Davis signifying on Sinatra on OUR SHINING HOUR with the Quincy Jones charts. Is that Snooky Young taking the trumpet solo around 1:55? When the voice re-enters at 2:05, it's definitely Sammy being himself, and it's "Sammy Davis" til the end. But the Sinatra impression for the first minute was amazing -- pitch perfect. What's not to like about this track? I have to buy this record. 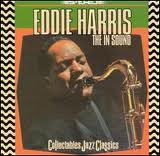 TP: "The Shadow of Your Smile" at a medium-bounce. At first I wasn't oriented as to whether the saxophonist was playing alto or tenor, but after a minute I realized that this is Eddie Harris' classic version from THE TENDER STORM, circa 1965, with Cedar Walton, Ron Carter and Billy Higgins, on perhaps the first time that this classic trio convened. I'm not crazy about the mix/remix -- I don't think Ron needs to be so high up in the mix, but that's just me. Deep swing. as a young guy in Chicago, Eddie Harris -- who came up playing piano in the church -- was a fan of Stan Getz -- and obviously Prez -- and took a lot of crap for this. He's one of the most subversive musicians ever. He knew how to connect with the public while not pandering or going overtly for house. At 2:36, check out how he gets a very trumpet-like sound out of the tenor...what control over the upper register! Lots of vocalized inflection as well. That squawk at 3:02! Or the way-up-in-the-altimissimo line at 4:02, that gradually winds down into mid register. Cedar's comping is super-hip -- check what he does around 3:32...just elegant, doesn't call attention to itself. An artist in complete control of his materials. And Billy Higgins is swing itself. What an original Eddie Harris was! After all, Muhal Richard Abrams was his pianist-of-choice through most of the '60s, and some of the stuff they recorded was way on the outer edge of things. 5 stars. 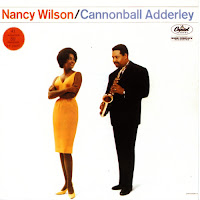 TP: "Never Will I Marry." This is Nancy Wilson with Cannonball Adderley. Capitol Records, circa 1961 or 1962. Nice riffing behind her around 1:40 when she recapitulates the lyric. I dig the pungent timbre of her voice, the way she builds an emotional arc, conveying meaning in her initial rendering of the lyric through phrasing and deep swing, and then, after Cannonball's pithy solo, turning up the heat. Very tasty, to the point. Nice functional arrangement as well. I'm not as big a fan of hers as some, but she's such a pro, and such a distinctive voice. 4 stars. 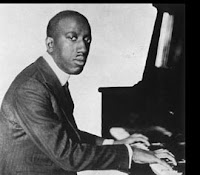 TP: James P. Johnson's "Carolina Shout." Can't pinpoint the recording date, nor whether the performer is the composer or Fats Waller or Willie the Lion Smith. I think it's James P., though. There's a brisker, more percussive version of this by James P. that I favor, and I love Fats Waller's version, too, not to mention the video of Willie the Lion playing it with Osie Johnson on brushes. Club Barron in Harlem must have been quite a hang circa 1910. George Gershwin certainly thought so.