I consider myself mostly self-taught as a jazz pianist. I will admit that I had one month's worth of lessons in 2nd grade, and I did study trumpet from 4th grade through college, and I did take Class Piano in high school, and I did study a bit with Fred Karpoff when I was at Peabody. But in terms of putting together the basics of jazz piano, I did much of it on my own. Truth be told, I would ask older players about voicings, or licks, or recordings, and then try to figure it out at home. Initially, my home made piano style consisted of playing trumpet licks in my right hand and snare drum ideas in the left hand, since those were the instruments I had previously played. Plus I had listened to a few key recordings, and I suppose I had absorbed a certain "jazz feeling" that translated to my comping on the piano. Also, I had played trumpet along with many of the Aebersold Play-Along recordings, so much that the comping of players like Kenny Barron and Cedar Walton were really in my ears. But in terms of regular jazz piano lessons for a long period... never.

However, I do have fond memories of two lessons I took in the early 1990's with the great pianist James Williams. If you aren't familiar with Williams, you need to be. Williams is probably best known for his tenure with the great Art Blakey, as well as having worked as a sideman with many other jazz greats, such as Tom Harrell, and Dizzy Gillespie.  He also recorded a good number of solo albums. He was one of the founding members of the Contemporary Piano Ensemble (which also featured Mulgrew Miller, Geoffrey Keezer, and Harold Mabern, and sometimes also Donald Brown.) He was the Director of Jazz Studies at William Paterson University for 5 years, until his tragic and untimely death from liver cancer in 2004. Williams was a prolific composer, and his tunes are oftentimes played by others; gems such as "The Soulful Mr. Timmons," "Alter Ego", and "Arioso" are amongst William's works that have been covered by others. 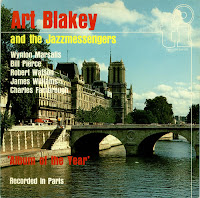 I first heard Williams on the Art Blakey recording called "Album of The Year." (This album is probably more renowned for featuring a young Wynton Marsalis, before he was the household name he is today.) I then heard Williams' series of "Magical Trio" CDs. I was fortunate to get to hear Williams live a few times in Washington D.C.: once at the famous One Step Down with a local trio, and then at Twins with his group which he called the Intensive Care Unit. This was a great band which featured Steve Wilson on alto saxophone and Miles Griffith on vocals. I was always impressed with Williams' pristine touch and inventive harmonic ideas. Williams could channel his Memphis gospel roots quite easily, but he could also conjure up Chick Corea-type angularity that could be shocking. (Once Williams told me how he and Mulgrew Miller used to practically worship Chick Corea's classic trio album Now He Sings, Now He Sobs.)

I had met pianist Geoffrey Keezer at Bradley's in New York, who was good friends with Williams, and  he gave me Williams' info in order to hook up some lessons. At that time, I was still living in Washington, D.C., so I would drive my 1984 Chevy Celebrity up to New York. (I remember it was a blinding rainstorm when I drove up for my first lesson. I was terrified driving across the Manhattan Bridge in a torrential downpour . Are they ever going to repair that bridge? C'mon, Bloomberg....) After getting lost in Brooklyn for a while, I found Williams' apartment.

Williams' was so down to earth, a really genuinely friendly person. He was extremely generous with his time. In fact, I believe the lesson lasted about four hours or more! I played piano for him, and he gave me some advice. He played some of his original tunes for me. I remember he showed me a really slick voicing for minor 11 chords, which I still use today. One of the hippest things Williams' said to me was regarding solo piano playing:" You don't have to play the whole time. You can play as if there is a bassist and drummer. Get comfortable with the space."(I have found this advice tremendously useful, and I regularly tell my students this. Many jazz pianists overplay when they are alone: they feel like they have to try to be Art Tatum in order to be interesting.) 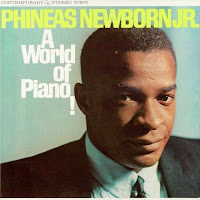 I was impressed with Williams' record collection. Remember, this was in the  early 90's, so Ipods were not even an idea! It seemed as though his entire living room was filled with recordings. He turned me on to the great R&B singer Donny Hathaway. He also played me some music of saxophonist  Frank Strozier, who I was unfamiliar with. We listened to some Phineas Newborn, who I had just discovered through Geoffrey Keezer. I remember thinking, "Wow, I know nothing about jazz....."

I remember a bit of an awkward moment when I finally went to leave. Williams' had never told me how much he charged for lessons. "Pay me whatever you think is fair...." he offered. I wrote a check for what I figured a 4 hour lesson with James Williams was worth. I thanked him and then drove to my friend Andy Bachman's apartment in Park Slope, Brooklyn. Bachman and his wife were nice enough to let me stay with them occasionally during these jazz fact-finding missions to New York. That night, Bachman showed me videos (that's right, videos.....) of a then up-and-coming TV show called Seinfeld. (I think I stayed up all night laughing my butt off......)

But I also remember the next time I spoke to James Williams on the phone. "Hey, I think you overpaid me for the lesson. I want to give you some money back....". "Uh, well.....why don't we just put it towards the next lesson?" I asked. " He agreed. I was really touched by his benevolence.

I would bump into James many times over about a decade. I was really shocked the last time I saw him before he died. He had lost a lot of weight. I didn't know it was so serious. We were both playing on a concert with three different bass players: Richard Davis, Eddie Gomez, and Buster Williams. I remember we were talking in the dressing room before the show, and there was a small upright piano in the room. Williams sat down and played some beautiful ballads. I got this sinking feeling that maybe he sort of knew he didn't have much time left.

I attended Williams' memorial service at St. Peter's Church on 54th and Lex. Like many of the events at this church, it was a veritable who's who of jazz. Williams had made a lot of friends in the community. I was almost moved to tears when pianist Mulgrew Miller gave a wonderful speech about how when he had moved to Memphis, he was asked to do a gig, but he didn't have a Fender Rhodes. Williams barely knew Miller, but offered Miller his own Rhodes, even though Williams had a gig that same night. It struck me how selfless Williams was, to give up his own instrument to someone else. That kind of magnanimity is rare.

If you are interested in hearing some of Williams' playing, you can go here to CD Baby, or go to Itunes: sadly, there is only one CD called Alter Ego, but it's a great CD with an all star lineup of saxophonists Billy Pierce, Bill Easley, bassist Ray Drummond, and the late drummer Tony Reedus. It features many of Williams' classic tunes. 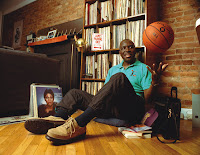