Pastorius,Milkowski,and Rosenwinkel: Not A Law Firm

First of all, my apologies to fans of jazztruth. Ever since my wife and 9-month old son have arrived in Winnipeg, I have, shall we say, had other things to attend to besides the state of the jazz world. And keep in mind I am teaching full time at the University of Manitoba and the fall semester has just begun. All that, plus minor gum surgery, has kept me from updating my precious blog. However,  I assure you I have a plethora of ideas and recorded interviews waiting in the wings. So don't despair, gentle readers: I will post as much as physically possible. Even if it means just posting pictures of my son banging on his toy xylophone every week! And yes, my son can already play Coltrane's solo on Giant Steps, but not up to tempo. Plus, he usually needs a diaper change afterwards. (I'm sure you've been in the same situation after you've played Giant Steps.)

Some of my previous posts have been quite lengthy and verbose. This time, I thought I would just give you the highlights of what I have been checking out. I admit, it can be hard to stay focused in this youtube- itunes-futuristic-information-superhighway kind of world we live in. Not to mention my students are always reminding me of some album or musician that I haven't listened to in a while, or perhaps some prog rock band that I need to check out. So at times, I find I'm all over the map when it comes to my "research". But here are a couple of things that I found some time to focus on more this week.

Jaco Pastorius is and was thought of by many (including himself, R.I.P) as " The World's Greatest Bass Player." I think without question he should be regarded as an important innovator of the electric bass and an icon in jazz fusion. He is frequently compared to bebop sage Charlie Parker,  not only because he revolutionized the bass technically and conceptually (as did  Parker with the alto saxophone), but he also had a tormented, drug addicted personal life which led to his demise much too early. His short burst of life is well documented by Bill Milkowski, one of my favorite music journalists, in Jaco: The Extraordinary and Tragic Life of Jaco Pastorius. This book came out about 15 years ago; I had read parts of it before, but I finally got to read the whole thing cover to cover. It's a fantastic read (I read it in about a day, which is a good sign regarding whether I like a book or not. Let's just say I have NOT finished Paris Hilton's Confessions Of An Heiress, although I plan on sitting down to read it as soon as HELL FREEZES OVER!).

Many times, I couldn't help but wonder if anyone ever considered writing a screenplay based on this compelling biography. Milkowski writes not only as a knowledgeable, experienced journalist and music lover, but he was actually friends with Pastorius, which gives the book a very intimate mood. (I also enjoy reading about the musicians and haunts of the New York Jazz scene in the mid 1980's, a good ten years before I moved to the city.)  The consensus, especially from those who were interviewed by Milkowski, seems to be that Pastorius was a colorful character, to say the least; indeed, colorful characters bring their share of positives and negatives. Jaco, at the height of his power, was a musical god, with huge success as a solo artist and a member of legendary fusion band Weather Report. At his lowest, he was panhandling, sleeping on basketball courts and hanging out with the bums and drug addicts on West 4th Street.

While the brutal, honest portrayal of Jaco's substance abuse and mental illness is sad and unflattering (and I am aware, controversial to some), it doesn't diminish Jaco's greatness or importance: I came away from the book inspired to search for my own innovations, and to channel my own inner Jaco, so to speak. I also can't help but think that if Jaco had come up more recently, maybe he wouldn't have been as tempted by drugs or alcohol; since musicians are generally living healthier lives these days-not to mention that there is much more awareness of mental illness like Jaco's. (My own experience with people with these kinds of conditions is that they tend to self medicate if they are undiagnosed.)

Milkowski's final paragraph, regarding which song he thought of first after Jaco's untimely death, is particularly touching to me; Three Views Of A Secret is, for Milkowski is " the one song that best captures the complexity of Jaco's character and the depth of his soul. In the course of six minutes,[this tune] reveals more about Jaco's character than any other piece he ever wrote. It's as if he had composed his own requiem." I've been a fan of that piece for a long time, and I actually play a solo piano arrangement of it. (I recorded it on my second Criss Cross release, Past Present Future.) I believe it has many emotional layers, and composing like that elevates Jaco from merely a bass prodigy up higher to the level of true artist. 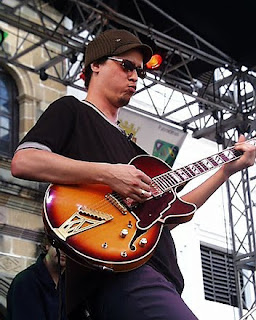 Moving on: speaking of true artists, the great jazz guitarist Kurt Rosenwinkel has a new CD out entitled Our Secret World. If you are already a fan of Rosenwinkel, you will delight in hearing this virtuoso composer and improviser in a surprising context: in front of a big band. The Orquestra Jazz De Matosinhos (OJM) from Portugal does a fine job in backing Rosenwinkel, and the arrangements definitely do justice to the original compositions. The sound is quite lush and modern-highly appropriate for this cross section of Rosenwinkel's music. While some might lament the lack of small group interaction, I compare it to Herbie Hancock's Speak Like A Child or Inventions and Dimensions; albums which seem to truly feature Herbie and his writing more than any other players. If you are a first time Rosenwinkel listener, hopefully this enjoyable collection will inspire you to investigate his many earlier recordings.