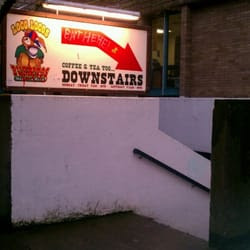 Back in the 90's, I led the Sunday night jam session at Twins Lounge in Washington D.C. I was a sub for bebop pianist Peter Edelman. I was right out of college, and I had never been in that sort of position before. This was a serious East Coast type of jam session: where cats came out to seriously play difficult tunes, fast tempos, and basically wail on as many choruses as possible. It was not rare to have 25 horn players on one song. I used to BEG cats;" OK, this is the last tune, everyone take ONE CHORUS!" No one listened to this 22 year old punk! Everyone played as long as they could, and the tune would stretch into the wee hours. That happened every week for a few months. It was a great learning experience for me.

I haven't led a regular jam session since then. However, beginning this evening, I and vocalist Jeff Baker are hosting what we hope will be a regular jam session in Portland. It's at a place called Loco Loco (1728 SW Broadway, very close to Portland State University), which has (you guessed it) great Mexican food and drinks of many nationalities. It is ALL AGES. The jam will be 7-9:30. We shall see how it goes.

I have to hand it to Professor Baker, who basically walked in and asked the owner if we could host a jam. I actually believe that there are many venues in Portland that would be great for music, but no one has taken the initiative to ask about it. I think we need to be proactive in terms of making gigs happen, and not just wait for someone else to do it. That's of course easier said than done. I've never
actually done anything like that. However, Baker's efforts have inspired me. (By the way, there is a cool article on Baker in the PSU Vanguard that came out yesterday.)

When I first arrived in Portland and began teaching at Portland State University, what we refer to as the Area Recital was essentially a not-so-well organized jam session. We have gradually shifted the Area Recital into a weekly performance and masterclass series. It's been really wonderful, however, I do believe that a weekly jam session is important as well. I have much respect for Portland's own, drummer Ron Steen, who has been running jam sessions probably since I was in middle school. I think a jam session has to be organized and has to have a balance of exclusivity and inclusiveness. It should NOT be everyone jumping up at once plowing through a blues, and it should NOT be totally elitist, where only the favorites get to play. This will be a challenge, especially with such a short time frame to work with. Having a Sign Up Sheet will probably help.

We hope to see you tonight and let's hope this will be the start of something good!