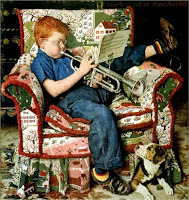 I remember back in the early 90's when I was just a lad; my only responsibilities were show up to my gigs and make rent. It wasn't any more complex than that. I had 4 to 8 hours a day for heavy practicing, and I was play constant gigs, so I always had a chance to try out the stuff I was working on at home. I was writing a lot, and listening, and transcribing. I was very methodical. I barely ever missed a day. If I wasn't practicing, I was thinking about practicing, much to the dismay of my girlfriend at the time! Even before that, I was into practicing in middle and high school(although I was mostly practicing trumpet).

Cut to twenty some odd years later; I barely remember what it's like to touch a musical instrument for longer than a few minutes. But when I do get the chance to actually play a gig or a concert or even a rehearsal, I'm expected to perform as if I've been shedding and playing all the time. Well, maybe more of the expectations are coming from me, but even so, you always want to sound as if you are at the top of your game.

So, the dilemma is as follows: how do I maintain my responsibilities as an educator, administrator,

father, husband, and homeowner while still growing as a musician? It's really not easy. In fact, it's darn near impossible. If I get two minutes of practicing a day, it seems like a lot. Ten whole minutes of practice is an occasional luxury. And a free hour of solid practice? Wow, that would be amazing! and unfortunately, quite rare to occur.

One of the issues is that now, with such limited time, when I do finally sit down to play an instrument, I don't really want to play anything REALLY challenging. I want to just PLAY; play tunes I know and play stuff I know. Well, this is most definitely NOT practicing, it's just playing my instrument for fun. Even though it might just help to maintain a touch on an instrument, it's still not going to push you enough. You have to force yourself to practice something hard, something that you will NOT sound good on, or even feel good playing it. I would call this HIP(groan....), or High Intensity Practice. (I'm sort of joking with this....but hey, if it catches on....then I'm not. Anyway, it's an analogy.)

Yes, I believe that this type of approach is much like the difference between doing LONG SLOW CARDIO and HIGH INTENSITY INTERVAL TRAINING. Yes, going out for a long run on a beautiful day can be relaxing, but it's the fast, shorter sprints and hard running alternating with slow running that will boost your fitness and burn more fat. (Hey, at least that's what Men's Health Magazine says. And they say it every month. In fact, every month is almost the same magazine. "Flatten Your Abs" is the cover story almost every or every other month. What a racket.) My point is that intervals, while difficult and unpleasant, really do your training a lot of good. What's great about them is that you don't have to slog about for hours; you should be done your workout in 30 minutes or less. (This is why I like the analogy, because Interval training, like short bursts of practicing, both appeal to people like me with very little free time.)

In this way, practicing REALLY HARD, at a sort of all out intensity, for a short period of time, 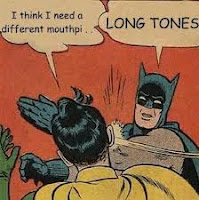 followed by rest periods of varying degrees, will be more beneficial than having a general sort of "play" for 6 hours. Not to say that even just playing anything for 6 hours wouldn't have benefits; hey, if you played the Enya Songbook on trumpet for 6 hours a day, you might have an embouchure of steel!(Actually, trumpet is perhaps a different issue, and honestly, because I play trumpet even just on occasion, I find myself looking for time "just to get the horn on my face." Maintenance is a huge part of trumpet playing. If you don't play trumpet everyday, you are kind of screwed. Which is maybe why trumpet can be so unmusical; we spend so much time with long tones and lip slurs and exercises that we forget how to make music. No offense.)

We always have to ask ourselves, "Is this really practice or just playing?" Believe me, there is nothing wrong with just playing. Much of being on the bandstand on a jazz setting is about that. However, if you only had 10 minutes a day to practice and grow as a musician, what would you do? Play a song you know, or work on something really difficult which would stretch your capacity? For example, working on "Freedom Jazz Dance" in every key is something which will be difficult. That's not the easiest thing in the world. 10 minutes of that will not be fun at first. BUT, if you worked on that for

10 minutes a day for 2 weeks.....you might be having more fun with it at that point.

Sight-reading is something we can all stand to work on. If I decided to spend my 10 minutes on sight-reading, I would pick something either moderately difficult and try to read it in tempo, OR I would pick something extremely difficult just to stretch the brain. The good news is you're only doing it for 10 minutes! As with High Intensity Interval Training, you don't do it for hours on end. You do it in short bursts.

If you are young and have lots of time, try practicing high intensity for 10 minute intervals and then either rest or do something else; watch TV, mess with your phone, etc....then do another 10 minutes. Unfortunately, I probably wouldn't have another 10 at this point in my life....although when this school term is over......ah, please make it be over......oh, sorry, what was I saying?

See how it works for you. Whether you have endless time or a tight schedule, try to ramp up your intensity. And by the way, you aren't going to sound good during those 10 minutes. You shouldn't! This is something which prevents us from getting better: worrying about sounding good!

It's fascinating watching the Ken Burns documentary on Jazz and watching Artie Shaw talk about the Glen Miller Band during the Swing Era.

like what he did. Miller was, he had what you'd call a Republican band. It
was, you know, very straight laced, middle of the road. And Miller was that
kind of guy, he was a businessman. And he was sort of the Lawrence Welk of
jazz. And that's one of the reasons he was so big, people could identify with
what he did, they perceived what he was doing. But the biggest problem, his
band never made a mistake. And it's one of the things wrong, because if you
don't ever make a mistake, you're not trying, you're not playing at the edge
of your ability. You're playing safely, within limits, and you know what you
can do and it sounds after a while extremely boring.