Norway Stakes A Claim in Jazz

While browsing the news feed on Facebook, I came across this article on the NPR Site: "How Norway Funds a Thriving Jazz Scene" by Michelle Mercer. (The writer, who recently penned the biography "Footprints: The Life and Work of Wayne Shorter," happens to be married to an old friend of mine from Baltimore, bassist Marc Niehoff).

This article piqued my interest for many reasons. I have always been aware that European nations, due to their financial contribution to the arts in general (much more so per capita than the United States), have supported so many more jazz tours than the nation where jazz was born. However I have always resisted the notion that Europe should become the de facto "new home of jazz," maybe because 1) I have not figured out a way to live in Europe, and 2) perhaps I have some kind of subconscious national pride about Jazz music. (I suppose those who who would label me a "Blame America First" sort of liberal might be surprised to hear that occasionally, under circumstances, if the wind is just right, I'm slightly proud to be American. It usually clears up after a good night's sleep and some Tylenol...)

As I have mentioned in previous posts, the British writer Stuart Nicholson wrote a book a few years 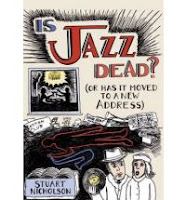 ago called "Is Jazz Dead? Or Has It Moved To A New Address." This book was actually a more in-depth version of a New York Times article written in 2001 (the book was published in 2005) based on the same premise; Nicholson contends that European jazz musicians are not only better funded, but also more innovative and more interested in furthering the development of the art form, while American musicians like Wynton Marsalis and others are merely regurgitating the past, treating Jazz more like a museum piece rather than a living contemporary art form.

While Nicholson makes some valid points, I feel that he uses pretty selective and at times, dubious examples to prove his point. Let's take the example of Wynton Marsalis, who, as we all know, has a very rooted philosophy: Jazz music is about the blues and swing and if that isn't in it, it's not happening and it isn't Jazz. OK, fine, but that's ONE musician out of hundreds who are known, and thousands who are unknown. Many American Jazz musicians are going further; it;s just that we can't get funded. Our cultural system in the U.S. is mostly based on commerce. If you sell, you get to play and you get attention. And usually, you will sell if you get a record deal, or you have a hit song, etc... It's also incredibly competitive in the United States; most people cannot compete with Wynton Marsalis' fame. Meanwhile, in European nations, there are considerably fewer jazz musicians, and it is much easier to get public funding.

Case in point: the Swedish trio known as E.S.T., or the Esbjorn Svensson Trio, was a very successful jazz group in the late 90's and into the last decade. (Svensson tragically died in a scuba accident in 2008.) Our writer Nicholson holds up E.S.T. as an example of music with the "Nordic Tone," and claims that they are much more innovative than the current crop of American musicians. E.S.T was highly popular in Europe, it's true. They had major funding from the Swedish Government, to my recollection. Musically, I think E.S.T. was pretty good; not particularly innovative to my ears, and certainly they didn't play anything that the Keith Jarrett Trio played better years before. Honestly, it seemed unfair to me that a pretty OK Swedish group, thanks to plentiful Swedish money, could become mega-stars playing jazz while so many great American jazz musicians I knew could barely get one gig a year. (I'm not really trying to bash E.S.T., I'm just saying that an American group playing the same music without funding would be unknown.)

That silly national pride combined with my own glorious self interest made me think quite unfavorably of Nicholson's suggestion that Jazz is now a European phenomenon. I don't necessarily mean the book itself; many have taken issue with it's selective journalism and I think they are right.  Many of Nicholson's arguments just don't hold up when you really think about it. I'm talking about just the idea of Jazz in Europe. I still wanted the old paradigm of Europeans booking American jazz musicians in their festivals to go on forever. Instead, nowadays, when you look at the European festivals and venues, it's more often than not European musicians and groups. This is not only due to more interest in European jazz musicians, but it's also for basic economic factors: why pay 1500 dollars for a plane ticket from New York when you hire someone from Berlin and pay only a few hundred Euros for a ticket? Plus, the fact that it's far easier for European musicians to get government money for a tour; in the U.S., it is really difficult to get any kind of grants.(I've gotten a few; back in 2003 I received a Chamber Music America Grant and an Arts International Grant. It's very competitive. I applied for the CMA grant many times again and never made the cut. Arts International is now defunct as far as I am aware.)

This, from the NPR article by Mercer, really struck me:

For now, though, most Norwegians still consider art and culture too important to be left entirely to the markets. As long as art is considered a public good, it will pay for Norwegian jazz musicians to dream big — and write lots of grant applications.

I still believe that Jazz is America's art form. I question whether the music being called "Jazz" in Europe is actually Jazz; it might just be jazz influenced improvised music. There is nothing wrong with that at all. But this idea of music and the marketplace is the dilemma. In America, we are all about the market. The success of your art is based on sales. YOU as a person are judged by how much money you make, how big your house is, what kind of car you drive. I think many Europeans don't see the world in this way. They see culture as part of the public good, rather than a commodity. Despite the economic doom and gloom going on worldwide, Europeans have at least built societies which have the people's interest at heart. When I look at how our government lets the interests of the 99 percent slip into the ocean, then I wonder whether we have the strength as a society to save our own cultural institutions. And if this is the case, if we as a society cannot hold on to what's important, then I say Europe already has more of a claim to Jazz than we would like to admit.