It's Jazz Festival Time here in Portland, Oregon. This is a very exciting week. There is a lot going on, and it's probably impossible to hear it all. Fortunately, my excuse is that I'm performing quite a bit. Unfortunately, I will miss a lot of great music. The PDX Jazz Festival, like most good jazz festivals, has a wide variety of jazz artists, local and international. Thanks to festival director Don Lucoff, there are huge headliners as well as student ensembles as well as Portland mainstays, all presented for your listening pleasure.

Tonight, I got the opportunity to introduce, interview, and listen to one of the true piano jazz greats: George Cables. When we talk about jazz piano, we of course speak of Herbie Hancock, McCoy Tyner, Chick Corea, and Keith Jarrett. But if you are just getting into this music, and you dig a little deeper deeper, you find names like Kenny Barron, James Williams, Harold Mabern, John Hicks, Onaje Allen Gumbs, Albert Dailey, Ronnie Matthews, Larry Willis, and many others. George Cables is one of those jazz pianists who played with all of the greats and is still, even in his late 60's, still on my Talent Deserving Wider Recognition list! He has had all the dream sideman gigs, and has a lengthy discography as a leader as well. He's a true New York pianist. (He's from Brooklyn as well. Isn't everyone from Brooklyn?) He's also an extremely friendly guy, and was nicely forthcoming in our "jazz conversation" before the concert at Classic Pianos officially began.( I tried to record the interview but my computer crapped out. I asked him about playing with Joe Henderson on "Live At The Lighthouse", among other 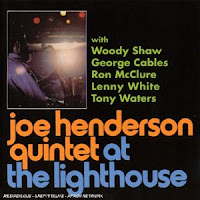 Cables gets a wonderful variety of tone color out of the piano. He began with a fast and flowing version of "My Foolish Heart." I enjoyed the fact that Cables, much like Art Tatum and Bill Evans, can stretch his timing in a very tasteful way. At times, it was rather Chopin-esque, and other times, it was solidly grooving. Cables played a number of great jazz standards, including Freddie Hubbard's "Up Jumped Spring" and Theolonious Monk's "Round Midnight", but he also featured some of his most beautiful compositions; a song for his mother entitled "EVC", and a song for his "best friend" Helen Wray (who sadly passed away in 2010) called "Helen's Song" were highlights. Cables, by request, played one of his hit tunes called "Think On Me", which he described as "a tune which I rarely play in a solo setting." Cables uses a lot of bass lines in his writing, and has a very fluid technique, but never overplays or tries to overcompensate for the "space" of solo piano.

Another welcome surprise was a quite high energy version of "Smoke Gets In Your Eyes." I'm noticing that many older players will take tunes that are considered ballads or slow tunes and make them into "burners." Indeed, "Smoke Gets in Your Eyes" is not an easy tune as a ballad, let alone as an uptempo tune! Cables continued on with an off-the-beaten-path McCoy Tyner ballad entitled "You Taught My Heart To Sing." He played it in the key of Bb and modulated to Db on the last A section, which I had never heard anyone do before.

Finally, Cables stood up to receive a standing ovation. As an encore, he played one of the most compelling tunes of the evening: an original entitled "Lullabye." George Cables has all of the hip New York edge and experience combined with a sensitive soul. I left Classic Pianos with musical joy and inspiration still ringing in my ears.