Greetings, jazz fans! I'm here in Bergen, a lovely town on the western coast of Norway. This is our first stop on a two and a half week tour with the Jack DeJohnette Band. In addition to DeJohnette on drums(if you aren't familiar with Jack DeJohnette, PLEASE "google" his name. He is one of the living legends of jazz drumming.), we have Rudresh Mahanthappa on alto saxophone, David Fiuczynski on guitar, Jerome Harris on bass, and your truly on keyboards and pocket trumpet. We haven't had a real tour since May of 2011, so I'm looking forward to the musical development that extended tours seem to bring. I remember the last tour, when ninety minute sets seemed like ten, and every concert was more intense than the last. I also love to be in Europe in the fall; I have many fond memories of my first tours in the 90's, and they always seemed to be in October and November. 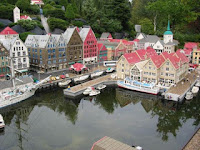 Although I've been all over Europe, we are going some places where I've never been. Norway is actually one country in which I have never been until yesterday. I was extremely jet lagged(three flights:Portland to Toronto, Toronto to Frankfurt, and Frankfurt to Bergen. Luckily, my luggage made it fine)so I've mostly been asleep since 2pm yesterday. Everyone says that Bergen is one of the most beautiful places on earth. Hopefully I will have some time today to take a look around. It' a little colder than I had expected; I hope I brought enough layers.

It seems like it gets harder and harder to pack for these trips. These days, I'm very careful not to make my big suitcase overweight. It seems like the airlines will find any excuse to charge you extra money. It took me several days to narrow down all the stuff I wanted to bring; I put my suitcase on the scale over and over to make sure I was within the 50 pound limit. When you are doing one nighters, flying and driving every day, it's tough to have the time to find a laundry. FORGET having your laundry done in the hotel; that's one of the biggest rip-offs in history. Unless you want to pay 5 Euros PER SOCK. (You always see those little price lists in the room for laundry. "Slacks-$12. Men's Shorts-$8. Who comes up with those prices? I wish more hotels had coin laundry.)I remember back in 1999, I was on a 7 week tour of Europe with Cassandra Wilson. We were staying at the Hotel Rey Juan Carlos in Barcelona. There was no laundry in site, so I asked if they could do it at the hotel. I incorrectly thought that the housekeeping was going to be cool and not charge me those outrageous prices. Surprise! I think it was over 100 bucks; however, each article of clothing was brought in a fancy box, expertly folded and smelling like perfume. They REALLY washed my clothes! Was it worth the astronomical price?I guess the 1% must have their clothes washed like that all the time......

We are also going to Bucharest, the capital of Romania, another place I haven't been before. Add the Azores Islands(Portugal),Slovenia and the Ukraine and it's definitely some new territories for me. I always say that it is a privilege to be a musician and  to get to travel to exotic locals not only for free, but actually getting paid to see the world. And don't take this the wrong way, but in this way,we are fortunate that jazz isn't appreciated in the United States. We have to travel outside the country to work, so we get to have an international experience more than, say, country musicians.(I'm guessing there's not much of a Toby Keith fan club in Romania. But I could be wrong.)

I'm looking forward to getting to play some music! For the past few years, I've been mostly teaching and helping with my son. I do get to play the odd gig here and there, but it's so different from when I was in New York in the last two decades. I felt like I was playing all the time, whether it was touring, or playing gigs around town, or making rehearsals. Or actually PRACTICING! I used to practice a lot. There doesn't seem to be enough time for that these days. Unfortunately, I'm one of those folks who has to practice in order to sound good. (My wife Kerry Politzer is one of those people who doesn't seem to have to practice in order to sound good. She's obviously spending a lot more time with our son Liam than I am, so she's never able to get to a piano. However, when she plays gigs, her chops never sound deficient. )

It's great to get a chance to play with musicians who are on such a high level, and who are pushing against musical boundaries. DeJohnette and Harris are a wise rhythm section; it's interesting how locked the groove can be without playing groove patterns that are particularly repetitive. It's consistent yet flowing. Fiuczynski has a whole micro-tonal world which I would love to be able to really explore. I have experimented with alternate tunings on my keyboard set-up, but it's an entire world of possibilities, regarding which I think I'm just barely scratching the surface.

I've really been inspired by getting the chance to play with Rudresh Mahanthappa. His melodic vocabulary is quite startling. He plays the kinds of things that made me wish I played the alto saxophone. I spent a little while this morning transcribing a ferocious double time lick from a solo he did on a video of the David Fiuczynski group at the Iridium. It probably lays better on the alto than a keyboard, but it's pretty cool to look at how Mahanthappa thinks about A minor. I'm posting the video and what I think is an accurate transcription of what he plays starting at 4:25. It's pretty wicked!(BTW, I don't know the tune they are playing; is it a Meters tune or something? If you know shout it out! Or, I'll ask David later today...)

Stay tuned for more from Europe... 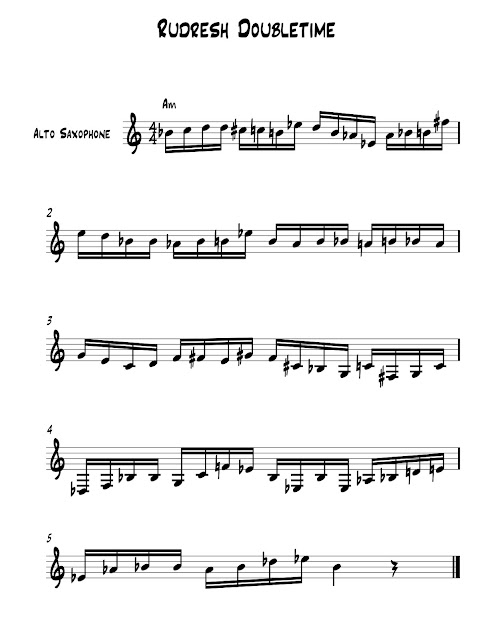