I was walking down the hall to teach a class at PSU when my colleague Darrell Grant ran up to me. "Come check THIS out!" I guessed that my ensemble could wait, and I followed Grant down the hall to another practice room. Inside the room were a bunch of folks were standing around a prepared piano. For those of you who didn't know, prepared piano refers to a piano which has stuff jammed in the strings to make it sound much different from what we expect to hear from a piano. It might sound like a marimba on one note, or it might sound like a drum, or it might sound like a ghost, depending on the treatment. There were a bunch of screws, bolts, and pieces of rubber wedged in the wires( No Rottweilers, though, jerky...). Grant dared me to play it; I plunked down a few notes. It kind of sounded like a Space Kalimba(Wasn't that an Earth Wind and Fire song?) "There's a free performance tonight at 8 of the John Cage "Sonatas and Interludes" in this room." I decided I would be there, since I live only 3 minutes walking distance from Lincoln Hall, and also because it was free. Seriously, I was in the mood for something unconventional. (I say unconventional with the full awareness that Cage wrote this piece in 1948.)

Just before 8pm, the small practice room was full of people who were also in the mood for something unconventional. Wynn Kiyama, the Professor of Musicology at PSU, introduced the soloist, a young man named Adam Tendler. Tendler has made a name for himself specializing in "new music", and toured the 50 states giving free concerts in places where new music might not customarily be heard. Tendler advised that the piece was "around 70 minutes" and added that there would be a Q&A afterwards. Tendler sat down and launched into the piece, which he had memorized.

For music that one might quickly leap to label as intellectual, I got a lot of emotional impressions as I listened. Obviously, the piece is all notated, but much of it had a playful, improvisatory feel to it. The program notes mentioned that Cage's piece had the structures harkening back to the music of Domenico Scarlatti, but it's hard to hear that, since the piece doesn't really seem to value harmonic progressions like what you might hear in piano music from say 1700 to 1930 and beyond. There is a lot of spookiness in the sonorities achieved by the preparation, which is interestingly offset by the unprepared notes. There is a lot of repetition, and some of the movements were very dancelike, and had a funkiness which was accentuated by Tendler's rhythmic performance. Tendler seemed to throw himself physically into the piece, and squeezed a lot of expressivity from Cage's printed notes.

There's a lot of cool sounds and phrases in the music, but there's also a lot of space, which is really important for the sort of haunted house-scary sounding parts. The piano was pretty soft overall, but Tendler performed with a very wide dynamic range. There were jarring thuds followed by tones which might be from a Satanic music box. Cage was trying to achieve the effect of a percussion ensemble, so there is a lot which I perceived as driven by rhythm, although there were lyrical moments as well. I never was bored, although towards the end, I was on the edge of thinking that a piece this long borders on the self indulgent. And then it was over; there was no climactic moment, it just sort of disintegrates, which Tendler later remarked "makes him hold back laughter"..... 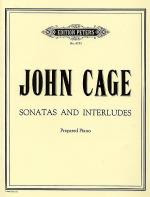 Cage was apparently inspired by the Hindu concept of rasa, which believes in eight states of human emotion: heroic, erotic, wondrous, mirthful, sorrowful, fearful, angry, and odious. (I think this is where they got the idea for the Seven Dwarves, but Disney took out odious because the Odious Dwarf didn't test well with audiences...). But what's interesting about this concept is that all of these states lead to tranquility. If you listen to the Sonatas and Interludes with this vague program in mind, it make the piece perhaps more meaningful, yet also adds to the unconventional nature of the flow of the piece, in that it kind of drifts off into a zen state of nothingness, rather than the clash bang of say a Stravinsky or Beethoven.

I downloaded a version of Aleck Karis playing this piece. (I'm a fan of Karis' recording of Stravinsky's piano music.) Also, you can download a  FREE version of Tendler playing it in Hawaii. If you are in the mood for something unconventional, you might be surprised at how much fun it is to listen to this great piece by John Cage.

Also, here's a clip of Boris Berman playing some of it....