David Fiuczynski is a very unique guitar player. Many of you know him from his successful band called Screaming Headless Torsos. He's played with Hasidic New Wave, trumpeter Cuong Vu, and pianist Hiromi. I first met David at a rehearsal with drummer Billy Hart, and then we played a few projects with clarinetist Don Byron over the years. We've been working together in Jack DeJohnette's band since 2009, and during our European tour this past May, I found some time before a show to talk to David about microtonality(which if you didn't know, is music that uses intervals of less than a half step, or notes in between C and C#), and his teaching at Berklee, among other things. This interview is in two parts; here's part one!
George Colligan: So why microtonal music on guitar, and how? Go!
David Fiuczynski: It’s interesting, since some people think I’m a fanatic, and I can’t blame ‘em for it. The first time I was exposed to Microtonal music was at New England  Conservatory. One of the big pioneers in Boston was Joe Maneri; he was teaching there. And the first time I heard something microtonal, I said, “Stop!”
GC: (Laughs)
DF: I said, “What are you doing? Could you please stop?” But then I thought, “You know, it’s been said that there’s only two kinds of music: good and bad…” and that’s right, because finally I heard a good microtonal piece.. it was really happening , so that’s when I started checking things out in more depth. I ended up taking a class with Maneri in the late 80’s.
But the real way the way I got into microtones was non-western music.And its really like…you hear something, you analyze it,  you transcribe it, you learn it…And you want more…. So to me, an Arabic call to prayer, or a Turkish melody, or something like that … a Chinese melody…a Vietnamese melody, it’s like, “oh, wow, ok.” They have notes that we don’t have. So you start seeing well, what systems can I use? It kind of affected me like Eastern blue notes, just like the blues. I mean, all those blue notes, those sweet notes; you can’t find those on the piano.
GC: Right..
DF: So I started to learn, I started to play in bands with any kind of Eastern thing going on. The one band that really allowed me to do whatever I wanted was Frank London’s Hassidic New Wave and also Matt Darriau - I would sub sometimes with the Paradox Trio, so that’s where I learned all the melodies and inflections. And I started playing with cellist Rufus Cappadocia. He’s on my first KIF CD.
I should say where it really hit me was in 1992, when I played with this group in Morocco. It was Western players from Paris , New York, and LA, and we were the house band backing up about 10 Moroccan folklore groups. So we rehearsed in Marrakesh. It was a dream gig for like 2 weeks; Jamie Haddad was on percussion, John Hassel on trumpet, everybody who had any kind of Non-Western musical experience.
And then we performed at the World Fair in Seville. And all the Moroccan musicians…they came up to me, and, only because I played guitar, it was very important for them to let me know that Hendrix came to Morocco.
GC: (Laughter)
DF: And that kind of sowed a seed, and that's where I was really interested in mixing these things with microtonality, like fat grooves… I experimented with a lot of downtown groups, but they were more jazz-oriented, and it was cool, but I just kept thinking… “Wow, what would happen if I combined this with grooves?” and then to really do it you need microtonality because a lot of these melodies, they just don’t work on 12 notes per octave. 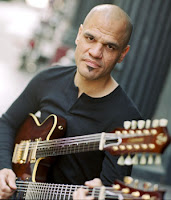 So a lot of playing with bands learning melodies inflections and then eventually I returned to NEC- New England Conservatory- for my Master’s, and I really focused on microtonality. I actually took Joe Maneri’s last class, and I studied with a sitar player and a Turkish harp player for 2 years and various classes… and I just you know- all my assignments I tried to work off a 72-note per octave grid, if possible, and then learn the melodies precisely; but then there’s also Western microtonality , and that's where you take notes and stack them into chords. That's where it gets really dangerous.
GC: Ha ha!
DF: But also really exciting! I think there are some really incredible opportunities, as you noticed playing with Jack DeJohnette…
GC: Right…
DF:You know it doesn't always work, but there were times when you’re just thinking, “Wow!”
GC Sure.
DF: And then it's the same thing: well, I want to  know more…. why does this work?
GC:Right…
DF: How can I expand? And I really feel like in a groove context- in a jazz groove context with microtonality and Eastern inflections …we’re not really doing Eastern improv concepts that much, but I think you can really do amazing things.
GC: Do you think that is one of the things that makes this particular band unique? The fact that you and Rudresh (Mahanthappa) have a handle on this stuff?
DF:You, too!

GC: Well I’m interested in it, I think that a lot of ..
DF: I can tell you right away there’s a lot of people “interested” in it.
GC: (Laughter)
DF: But you’re making it sound good, I mean, you know, you’re using a set tune and you’re experimenting…..
GC: Yeah, yeah
DF: But trust me I’ve sought  a lot of people out, and tried things. Non-Western players, Westerners just jamming, so-called pros, students… and I’ve seen many people with great intentions……and actually people more experienced than you, coming up with a whole lot less.
GC: Oh, well, thank you !
DF:But not too many cats are even trying.
GC: And the fact that Jack is open to it. I mean, because he’s the one that seemed to be pushing us to do it.
DF: Did I tell you how I got this gig?
GC: No, please do!
DF:So I played Don Byron’s wedding.
GC: Oh, yeah!
DF: And he got married to a Jewish lady…
GC:Yes, that’s right.
DF:So you know Fima Ephron was on bass, and he’s the band leader, and he said, “Hey, do one of your intros.” So I did my vibrato-wannabe-Arabic-micro-Western point-of-view-unorthodox thing. It just so happened that Jack DeJohnette was an invited guest to Don’s wedding and he came up to me after the set  and said, “Wow, that's the sound I’ve been hearing in my head for a couple of years!”
GC: Cool…
DF: So don't knock wedding gigs!
Stay tuned for Part Two! In the meantime, here's a video of Fiuczynski playing his double neck guitar; this might give you an idea of what he spoke about in the interview.