I'm enjoying my first few weeks in Portland. However, it's not difficult to reminisce about my years in New York City. The Big Apple easily has more jazz musicians per capita than anywhere else on the planet. This is why the level of musicianship and creativity is so high; no matter how great you think you are, you are always competing alongside many, many other greats on your instrument. It can be daunting, however, if you can put your ego aside, it can be inspirational. The fact that you can go out any night of the week and get a "lesson" is one of the reasons that I still think eager young musicians should move to New York City.

I got a great "lesson" recently when I went over to Smoke, one of the best clubs in New York, located on the Upper West Side of Manhattan. Mike LeDonne has been in residence here every Tuesday for
quite some time. LeDonne is quite busy as a jazz pianist, playing regularly with Benny Golson; he's worked in the past with Sonny Rollins, Bobby Hutcherson, Art Farmer, and many others. But he is also a tremendous Hammond B-3 organist. (Apparently, LeDonne played organ for much of his youth, but never really played in public until later in his career.)If you want to hear some ridiculously burning Hammond playing, then Smoke on Tuesday nights is your best bet.

On this night, LeDonne's quartet incorporated the talents of three other accomplished jazzmen: Vincent Herring on alto saxophone, Paul Bollenback on guitar, and Willie Jones on drums. The energy and precision of these four musicians together was very intense; the quartet indeed sounded like they had been playing together every night for a month!

All four men are virtuosi on their instruments, but LeDonne is particularly impressive as an organist. Now playing the Hammond B-3 is quite different from playing the piano, although obviously, they are both keyboard instruments, with 12 notes to the octave, divided into black keys and white keys. The sonic properties of each are very different; the piano keys trigger hammers which strike strings, and sustain and soft pedals can manipulate the sound, although most of the dynamic control comes from the hands. A good degree of weight is needed from the pianist in order to get sound from the instrument. In contrast, the Hammond B-3 organ's keys trigger an electronic tone wheel. The drawbars determine how many overtones will be heard in the sound: there are 5 sets of 8 drawbars, two for each manual( a B3 has 2 keyboards, one on top of the other) and one for the foot pedals(which is two octaves, struck by the left foot). The dynamics don't come from the fingers at all; an expression foot pedal is manipulated by the right foot. Additionally, you can add vibrato, chorus, percussion, and even trigger a switch which makes the Leslie speakers spin faster(did I mention that the speakers spin?).

If all of that isn't enough to make not just the Leslie spin, but your HEAD spin, there are the different ways in which the piano and the Hammond B-3 respectively function in a band setting. I personally find that the
piano is usually more of an observer and commentator, adding chords and rhythms depending on what the drummer, bassist, and soloist are doing. The B3 is a different story; it tends to be the foundation of the band. The organist is playing the bass, either doubling the bass or tapping one pedal percussively, and playing big chords, and soloing! It's a whole different approach, which is why there aren't so many piano/organ doublers as might be expected.

Mike LeDonne is one of the few who is excellent at both piano and organ. As an organist, he possesses a great deal of confidence. His left hand is a marvel; his bass lines are completely fluid, and he can hold down even breakneck tempos accurately and convincingly. His sonic choices as an accompanist show his experience and taste; he knows how to comp differently with the right hand depending on the situation, whether soft, unobtrusive chords played on the lower manual are needed, or if big, all- drawbars out with fast leslie type-of-chords fit the bill. LeDonne, above all, is always swinging. He's got a great ear for melody and how to make that melody soulful.

I stayed for two sets. LeDonne was nice to let me sit in on organ(although I was already very intimidated) and drums(I was really intimidated by the formidable Willie Jones!). And LeDonne was also generous enough to lay his most recent CD on me. It's called The Groover(Savant) and it is a gem; 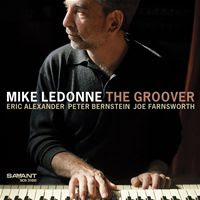 again featuring LeDonne and an all start cast of Eric Alexander on tenor saxophone, Peter Bernstein on guitar, and Joe Farnsworth on drums. It falls somewhere between a "blowing date" and perhaps something more produced. There are great arrangements and the group is tight, but there is also a looseness that you only get from jazz recordings nowadays. (What I mean is you get the feeling that this was a one or two day session, which is typical of any real jazz recording you will hear. We know that most of the "popular" music of today, for all of its banality, benefits from the luxury of big budgets and  loads of expensive studio time and editing. Much of the aesthetic of jazz is in the "spontaneity" of the recording, meaning that jazz musicians like to have a certain roughness around the edges; otherwise, it starts to become something else besides improvised music. Or so I think.)

I love the opening cut, Michael Jackson's immortal "Rock With You." It's a brilliant arrangement, and it sets the tone of the CD; It's as if LeDonne is saying, " Hey, welcome to my CD, make yourself at home, here's something you've heard before, except... this is how WE play it." The disco beat of the original is replaced with an intense medium swing, leaning towards a shuffle. It's amazing how well the melody and changes work in a jazz setting. The solo form is modified a little, but LeDonne and company have made it into a great vehicle for solos, which are succinct but still impressive. LeDonne keeps his bass steady despite fearsome double time lines in the right hand. His solo builds into an all-stops out frenzy, and tags with the proverbial "hold one high note on the right hand pinky and play lines with the other four fingers." It's debatable a perfect textbook Hammond B-3 solo.

"Blues for McCoy" (obviously for the pianist Tyner)is a serious burner. LeDonne comes out with a no-nonsense up tempo virtuoso flurry of notes, all the while keeping the bass together. It's no easy feat, and LeDonne nails it. It's really impressive when LeDonne will play ideas outside the key center, or even "float" rhythmically with his right hand lines. And the hook up between LeDonne and drummer Farnsworth is
flawless; I've worked with Farnsworth, and I always felt that up-tempos were one of his strong suits.

"Little Mary" is a tune written by Benny Golson; it was written for LeDonne's daughter. It starts with a cute little music box type of intro, but then switches gears into a happy, medium swing piece. I enjoy that LeDonne doesn't always delegate the melody to guitar or saxophone; it's nice to hear him phrase melodies on the B3. This is one of those feel good tunes that should put anybody in a better mood.

"I'm Gonna Make You Love Me" is the classic 1969 Motown hit from a collaboration between the Temptations and Diana Ross and The Supremes, although others have recorded it as well. This arrangement is also a hard driving medium burner, with great solos from all. I love LeDonne's comping on this one. Alexander sort of blows against the groove with rapid fire lines, yet he's so well supported by LeDonne and Farnsworth. LeDonne plays some nice shout chorus figures behind Bernstein's solo.

"Deep Blue" features a beautiful solo into by LeDonne, where he makes great use of the sustaining power of the B3, as well as the richness of the bass register. The tune is a very slow, bluesy walking ballad, with a certain sophisticated introspection. Some of the harmonies might remind one of some of Mingus' writing; the feeling is C minor blues, but with some unexpected harmonies. This is the moodiest piece on the album.

The moodiness fades with the optimism of "Sunday In New York", which is catchy and simple, without pretension. The next cut, "Bopsolete" is another uptempo workout. Compositionally, it nods to Joe Henderson, but it's essentially a rhythm changes. I feel that playing rhythm changes(the chord changes to George Gershwin's "I Got Rhythm", in case you were wondering) is becoming a lost art. LeDonne and crew are quite masterful; check out LeDonne's unaccompanied "stop time" solo on this one.

The title track, "The Groover" is, as might be expected, a true shuffle, but not at all hackneyed; this is absolutely mainstream jazz, and unashamedly so. LeDonne and his quartet aren't re-inventing the wheel, but the wheel is what still gets us everywhere we want to go, right? All in all, I'm digging the CD, and it's inspiring me to try to get my organ playing together.

Stay tuned for Mike LeDonne Part 2, which will be an in-depth interview.(I'm incredibly backlogged, 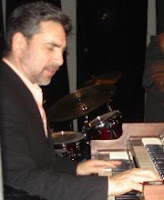 and the moving and so forth hasn't given me much extra time to hook up with LeDonne. Hopefully this month.....)