Jeff Williams is one of the great jazz drummers working today. Although he is a veteran, I think he is Talent Deserving Wider Recognition. Originally from Ohio, he's been in London, England for the better part of  a decade. He played with many of the greats back in the 70's and 80's. He had regular stints with Stan Getz,  Dave Liebman and Lee Konitz, and did a great deal of touring in Europe. Now he is spending much of his time teaching  at the Royal Academy of Music in London and the Birmingham Conservatoire. He's also working on the London scene, and keeps in touch with the New York scene. Williams is one of the drummers who in some ways is very traditional (he was a student of Alan Dawson in Boston) but uses that traditional foundation as a jumping off point for expansive musical explorations.(I think of drummers in the same category like Billy Hart or Jeff Hirshfield, two other guys who don't get nearly enough recognition.)

Case in point: "Another Time" is Williams' latest album, and it's anything but traditional, although it is acoustic jazz. But it's quite adventurous and interactive. Williams used what he calls his "steady" band: 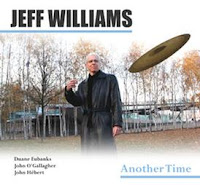 Duane Eubanks on trumpet, John O'Gallagher on alto saxophone, and John Hebert on bass. All of these musicians are currently on the New York scene, and they are all top level improvisors. Eubanks, whom I have worked with in his brother Robin Eubanks' band years ago, is very influenced by the great Woody Shaw; he has a modern, angular vocabulary, but also a very streamlined, , un-brassy, subdued trumpet tone. Even when the intervals are thorny, the sound is very even, pure, and direct. His sound blends well with alto genius O'Gallagher, whose solos overflow with energy and original ideas. (I haven't worked with O'Gallagher much, but would welcome the opportunity.) Bassist Hebert has been in much demand lately, probably because he has that magic sound which has just the right balance of thump, wood, presence, and sustain. Plus Hebert is one of the most killing soloist you'll here on the bass. Check out Track 2, "She Can't Be A Spy," if you have any doubts.


Most of the tunes are Williams', except for "Purple, Blue, and Red" by Eubanks(which is a mellow, hollow sounding ballad), and "Go Where Your'e Watching", a piece by O'Gallagher(a haunting waltz which begins and ends with a beautiful trumpet/alto chorale). Eubanks and O'Gallagher sound almost as one when they play unison lines. Much of the harmonic vibe of the album is very haunting because of unison lines and bass; the harmony is mostly implied. ( I always like to joke when  my colleagues tell me about a pianoless band they are trying to book. "What…do …you…mean? No piano? How does THAT work?" I'm just kidding. I actually LOVE bands without piano. I'm paraphrasing Hal Galper when I say that piano in modern jazz is rather superfluous.)

"Search Me" begins, as it should,with a definitive drum solo, which is parts Max Roach and parts Roy Haynes, and all Jeff Williams. The horns seem to float over a
rhythmic bass figure. It's very eerie sounding. O'Gallagher's terrifying lines contrast well with Eubanks more stately improvisations( think Cannonball Adderly to Miles Davis.)"Double Life" is a nice loose 6/4(i'm guessing) which has some nice harmonies between the horns. I love how Williams colors and interprets the music. Actually, in some ways, a piano player might take up the space which Williams' uses to propel the music to the next level.

"Fez" is a real tricky one; a nasty bass line with an obviously Arabic sounding melody. Ah, they do break into swing! This reminds me of Wayne Shorter's writing for some reason, where some of the themes are sort of literally programmatic (like the two note phrases of the melody to "Footprints" are apparently supposed to represent the steps of a monster.)
There's another ridiculous bass solo by Hebert on this one.

"Another Time" reminds me of some of Tony Williams' writing from the 80's. It begins with bowed bass and short phrases from the horns. But it ends up as a light straight eight/ boss kind of vibe. It's a very mature way to end the album. The whole recording has a compelling sound-very open and at times ghostly, but rhythmically and harmonically open to any possibility.  You can find this CD on Whirlwind Recordings(www.whirlwindrecordings.com), as well as itunes. Also, check out Jeff Williams website(www.willfulmusic.com). I know this CD was a long time coming and I look forward to hearing more from this gem of a band.