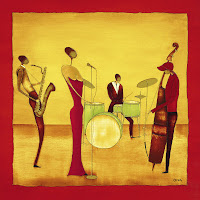 It's great to hear a band that has been together for years. Even if some of the members aren't as stellar as others, a band in which everyone knows the music, and is comfortable with each other, makes the music sound good. Gary Bartz used to say, "Nothing is better than a real working band!" And I agree. However, many promoters, producers, and club owners have no interest in real working bands these days. They just want to put together names that will draw the biggest crowd. And oftentimes, I can't say that I blame them. Times are tight. But also oftentimes, the "all star" bands that get thrown together seemed doomed from the start, musically speaking.

Many venues won't even consider booking  you at all unless you have an all-star band. The sound of the musicians isn't important. It's all about the names. The late Freddie Hubbard, one of my musical heroes without a doubt, could barely play the trumpet for the last 15 years of his life due to a lip injury.  However, he would get booked because his name on the marquee drew a crowd. In fact, sometimes, the name can be a dead person, hence the prevalence of "ghost bands" like the still-touring Duke Ellington Band (Duke died in the 70's) or the Woody Herman Band( Herman died in the 80's). I used to work with the Mingus Band , and before or after performances, concertgoers would ask, "Is Charles going to play tonight" or "Is Mr. Mingus ill?" (Or they thought Frank Lacy was Mingus......)Indeed, the Polish violinist Michal Urbaniak told me that he was trying to book a tour in Poland in the 90's, and one club owner asked him "Who is in your band?" Without skipping a beat, Urbaniak calmly replied, "Charlie Parker, Miles Davis, John Coltrane, and Art Blakey." The club owner said, "I've heard of them, " and booked the band.

A drummer and friend of mine named Jeremy Blynn used to do this hilarious bit called the "Norman Granz All-Stars", which was a fictional band consisting of Tito Puente, James Brown, Miles Davis, and Frank Sinatra. He would basically go back and forth between spot-on vocal impressions of all four
artists, and he always had us in stitches. But it wasn't just the imitations, which were impressive, but the idea of Puente, Brown, Davis, and Sinatra juxtaposed was so jarring. I bet that band would draw a crowd, but I doubt that those four giants would get through a sound check without some heated words or possibly even fisticuffs!

Sometimes, if I am completely bored, I'll make up all star bands that never existed, bands that would be very unlikely to exist. It's fun, yields some interesting results, and can distract me from the pain of sitting in coach on most airlines nowadays. It's kind of like playing Mad Libs: it's a sort of random creativity that makes you chuckle a bit. And don't try to read into any of these; it's only based on randomness and the strangeness of the combinations, and has nothing to do with my personal opinions regarding any of the named musicians. Have you every tried this? I wonder if anyone would pay to see any of these bands? Feel free to submit your own creations....

Now if you didn't crack a smile after any of that nonsense, then this might at least make you smile.....