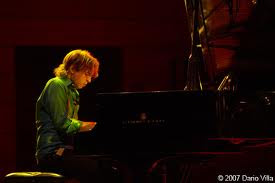 Jazz musicians are always learning from their elders. Oftentimes, we learn from our peers. And then sometimes we can learn from the younger generation. As long as we can put our egos aside, we can then put ageism aside, and just see all musicians as musicians. Jazz cuts across racial and cultural lines easily, and I think it cuts across age as well. (Sometimes you see teenagers playing jazz with senior citizens. It reminds me of when I was in my early 20's playing a three-night stint with then sixty-five year old vocalist Ernestine Anderson and then- septuagenarian bassist Keter Betts. But that's another story.) I learn stuff from my students all the time. Sometimes I learn so much from them that I feel guilty about taking their money!( My students are, of course, familiar with my strict "no refund" policy.) And I always have to remind myself that one of my piano idols, Mr. Geoffrey Keezer, is a year younger than I am. (Consarnit!)

One youngster has recently piqued my interest: A Seattle native named Aaron Parks. This twenty-something phenom may be known to many of you from his long-time association with trumpeter Terence Blanchard's band. You also may have seen him more recently with guitar-god Kurt Rosenwinkle's group. Parks started piano very young, plus he entered college at 14, and everyone tells me he was a prodigy. Well, we've seen prodigies come and go (Remember that guy W.A. Mozart? Whatever happened to him? A flash in a pan, that's what I say....) I realize that his latest CD and his first for Blue Note, "Invisible Cinema", is far from his debut as a leader, but at this point I have not been able to go back into his discography. And I don't feel the need at the moment, because I'm enjoying the heck out of this one.

In fact, sometimes I can't even get past the first tune. "Travelers" starts with a hectic, funky, frenetic drum-and -bass on acid groove with a sprinkle of Caribbean soca rhythm...oh, did I mention the meter is 15/8? It sounds like master drummer Eric Harland is using perhaps a single hi hat cymbal placed either on a drum or on top of another cymbal, giving it a rougher, splashier sound than a normal hi hat.
Matt Penman presents his usual dark and lovely bass tone. And on top of that pulsating clatter, Parks just floats in with some pretty chords, almost as if he's on another plane of existence. Parks eventually gets to some solo line-making, and although the progression moves generally at the rate of two per bar (or one per bar if you were to count it in double-time), it sounds like a treacherous form to improvise on. Parks sails through with very clean precision, with a reminiscence of Chick Corea or even Brad Mehldau , but not derivatively so.

Guitarist Mike Moreno joins the band for much of the album. " Peaceful Warrior" begins with a melodic, classical-influenced, appoggiatura-laden statement, which gives it an Irish folk tune vibe. If jazz gives you a musical image of a place, this tune made me think of perhaps a scene from " Lord Of The Rings" rather than beret-wearing hipsters jiving on 52nd Street. Harland and Penman enter gently, but morph into a  march-type groove in 3( although at first it sounds like 5 and 7). There is a lot of drama in this piece; brooding minor chords again lead to the angst of pianist Mehldau, however, Parks is a far superior composer, and hopefully this CD is just the beginning of Parks' development.

Some of my peers insist that "Invisible Cinema" is heavily influenced by Coldplay or Radiohead. I personally don't agree, although who knows what Parks was thinking about. I think it's a product of many influences from Classical to Jazz to Rock, but it finally fuses into a jazz quartet playing modern music. Not to mention Parks didn't forget to play the blues: "Roadside Distraction" is only missing a Mississippi Delta vocal to make it authentic (They should have asked Cassandra Wilson to do a guest spot...she is on the same label...).

The CD is beautifully recorded, and the piano sounds dark without being dull. I'm relieved at how the odd meters never seem forced. There isn't any literal swing on this record, but I'm an advocate of judging things by what they are rather than what they aren't. (This will hopefully become a persistent theme in this forum.)

Pianist John Chin is still a young man. (Younger than me, anyway...) I recently played a gig at Fat Cat in NYC with guitarist Tom Guarna. Chin was in the audience, and I asked him to sit in. I lived to regret it because he played more stuff in one tune than I had played the whole night! Chin has great facility on the instrument but he also knows how to develop musical ideas. I didn't feel so bad: In New York, you can never feel like you're ahead of the competition, because there are always more jazz musicians hiding in the shadows that may show up at your gig ready for action! But instead of being adversarial, I decided to become a fan of Chin, and to investigate his music a little further.

Chin's first CD as a leader is called " Blackout Conception" on the Fresh Sound New Talent label. I didn't set out to compare this CD with Mr. Parks' offering, but I'll say this: Where Parks is impressively ruminating, Chin is more playful and folksy. For example, the Kenny Barron composition " Joanne Julia" is so ironically restrained that it reeks of levity. But also it taps into that Brazilian emotion- on-the sleeve feeling. This performance has no interest in trying to impress, it's all about feeling good. The tenor saxophone genius Mark Turner turns on the charm with merely the beauty of his tone; we know he can double it up, but people don't realize that blinding speed is only one part of Turner's musicianship. Chin comps sturdily, and obviously has a handle on samba rhythm. (The tune starts out with DbMaj9 to D9, as if the composer was starting to play " Girl From Ipanema" and remarked to himself, "Wait a minute! I want to do something with this"...but that's just my own conjecture...)

I was deeply moved by "I Won't Argue With You", a Chin-penned ballad which I daresay has shades of Bruce Hornsby, but it still retains its proud quality. It's just pure emotion. It made me wonder what tragic event occurred in Chin's life to make him compose such a mournful piece. Chin has a dark sound as well, but a lot of variety within a generally mature piano tone. A bit of passionate percussiveness helps the performance to build before sadly fading away.

Leonard Bernstein's "Some Other Time" is one of my favorite standard tunes. It's hard to get away from Bill Evan's various inceptions, but Chin gives it a Bonnie Raitt treatment and it works to great effect. Again, Chin has no interest in overdoing the harmonic escapades or breathtaking runs. He simply plays the music. And after hearing him figuratively slaying dragons at the piano when he sat in on my gig, I know how much "chops" Chin hides up his sleeves. I can't wait for the follow up to "Blackout Conception", although I hear that a sophomore CD is in the works.