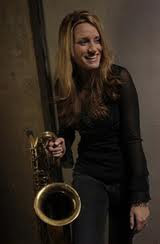 The night before my flight back to Winnipeg, I had my last gig in New York of the summer at The Kitano, a comfortable jazz spot in a nice Japanese style hotel at 38th and Park Avenue. I was performing with a young baritone saxophonist named Lauren Sevian. (Sevian's debut CD as a leader is called "Blueprint" on Inner Circle Music, a label started by alto saxophone great Greg Osby, and I was lucky to have the opportunity to play on the CD with bassist Boris Kozlov and drummer Johnathan Blake.) The gig was a lot of fun, with a talented young bassist named Marcos Valera on bass and my good friend E.J. Strickland on drums. They have a well maintained Steinway piano at the club, and it's as smooth as butter to play on it. We performed tunes from the CD mostly, and Lauren's alto saxophone playing husband Mike DiRubbo sat in on " Gesture of No Fear". (I laugh because , according to Sevian,  "gesture of no fear" is a restorative yoga pose, however, the harmonic obstacle course of this up-tempo workout makes me think of Coltrane's Giant Steps on steriods!)
Sevian has an approach that is un-baritone saxophonish, if that makes any sense. She goes for some tense note choices, and will lay on them, which comes across as more daring due to the edge and power of the baritone. And her writing is unique. She doesn't make melodies which typify the bari sax. Sevian is new to band-leading, but she leads with a quiet confidence which makes a relaxed, creative atmosphere in which to make music.
It was a great night, the audience was intimate but wildly enthusiastic. I felt like it was a satisfying way to end my summer vacation in NYC. After the performance, Sevian and I talked about doing an interview for my newborn blog...
GC: Do you think of yourself, if at all, as a baritone saxophone player, or a musician, or maybe both?

LS: I think of myself but mostly as a baritone saxophonist. Particularly because I don't really play any other instruments. I mean, I do a little bit but not like the bari.
GC:  You started on alto?
LS:  I did...but I don't even touch it anymore. I leave that to my husband.
GC:  Ha! What made you want to switch?
LS:  I felt like something was missing. I knew that I wanted to play saxophone but I wanted to try something different. My teacher at the time suggested that i try bari and I loved it! I knew right away that's what I wanted to play. That was around my sophomore year of high school.
GC:  But I remember years ago at Augie's you would sit in on alto, while you were a student at Manhattan School of Music.
LS:  Aah... I did ONE time...I think my bari was in the shop. I still played a little alto at that point but I was starting to phase it out.
GC:  I see...Do you think you have gotten more opportunities because of making that change?
LS:  Probably.  I mean, obviously there are many more alto and tenor players out there.
There are fewer bari players...but there are also fewer gigs for a baritone players. It wasn't a calculated decision which is kind of funny. I just wanted to play bari. I wanted to be known exclusively as a baritone player.
GC:  Yes, but I think one always has to figure out a way to stand out from the crowd, but it's always a risk. For example, Don Byron is a clarinet player first (although he actually played bari and other things) and there is not a lot of call for jazz clarinetists these days. But it makes him unique. Do you agree? Do you think as a bandleader you might have a niche as a bari player?
Lauren:  I see your point. It does make him unique. I know him as a clarinetist. I didn't know that he played other instruments. I guess I can see myself as having a niche as a bari player bandleader. Most of the time the baritone is considered a big band instrument, or large ensemble instrument. I've tried to approach the baritone more like a tenor.
GC:  Do you have musical heroes on Baritone Sax?
LS:  Oh yeah...Pepper Adams, Ronnie Cuber, Nick Brignola, Cecil Payne...
GC:  Do you have influences that are not bari players?
LS:  Coltrane, Dexter Gordon, Hank Mobley, McCoy Tyner....I could go on... 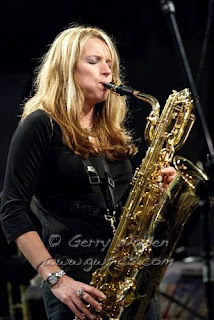