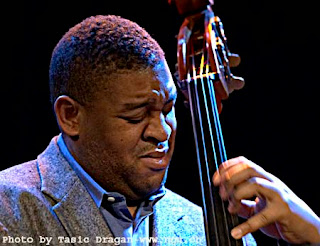 I remember the first time I heard Dwayne Burno playing the bass; it was at Augie's(which is now Smoke) on the Upper West Side of Manhattan. This was the mid 90's. I was very new to New York. Also playing was Dave Kikoski on Hammond Organ( of all things) and Joe Farnsworth was playing drums. (I'm trying to remember who was playing horns-could have been Eric Alexander on tenor and Jim Rotundi on trumpet...) What was amazing to me was that Burno was playing acoustic bass without any amplification and you could hear him just fine. He was driving the band like gangbusters. I remember Burno had a very determined look on his face; indeed, Burno always looked very serious, and his imposingly large frame combined with his intense visage might make you believe that he was completely unapproachable. However, the more I got to know Burno over the years, the more I realized he was a gentle, soft spoken, sweetheart of a guy. This is not to say that he didn't have some very deeply held opinions about jazz and the state of the music, which could result in some very, shall we say,  honest verbiage. Dwayne Burno was a guy who basically didn't like to bullshit; he spoke up about what he believed, and played the music in which he believed.

Burno was indeed the first bassist I played with to really play lines using extensions of the harmony in a very sophisticated way. The first time we worked together was around the same period (early 90's) with a band  trumpeter Kenny Rampton had put together. It was a quintet, and it featured Rampton's original music(Kenny Rampton is another highly underrated musician and composer.) I remember it took me a minute to understand what Burno was doing, because he wouldn't play the roots on the downbeat of each measure. Once I figured it out, the concept was really intriguing to me. I realized later that you can hear this approach from players like Paul Chambers and Ron Carter and many others. I always felt that Burno played great walking lines, great time, and also great solos, which were also harmonically advanced. Burno also seemed to have almost photographic memory, as well as perfect pitch, and also it seemed impossible to stump him when it came to calling standards.

I played with Burno quite a bit in the 90's. When I luckily stumbled into getting the opportunity to record my first CD for Steeplechase in the Fall of 1995, I called Burno and Ralph Peterson on drums.
The CD is called "Activism", and for a trio that hadn't rehearse and for an extremely green 25-year old me, it's really not bad.
Burno also joined me for my sophomore recording date entitled " The Newcomer." (If you haven't heard it, you should check out our version of "Evidence" to hear Burno and drummer Billy Drummond play time at at real "New York" pace! I may post that later.)There were a bunch of other gigs, recordings, and so on. We both played on Ingrid Jensen's "Here on Earth, which featured Gary Bartz and Bill Stewart.


I have to admit, I was oftentimes musically  intimidated by Mr. Burno; when you spend time with someone who is very knowledgeable but also opinionated, you can begin to wonder what they think of you! However, Burno was very supportive, and I even subbed in his band at Small's a few times. Furthermore, we did a European tour together during a time when I was experiencing some personal turmoil; Burno was my support through the entire tour. I don't think I would have made it without his empathy. ( I also remember he played an Ampeg bass on that tour; also, I remember how every time drummer Howard Curtis would play some great licks, Burno would give me a look as if to say, "Man, that was killing!")

I hadn't gotten to play with Burno much in recent years. I had heard that he was having kidney problems. Then I saw him in New York at a rehearsal studio, and we had a brief conversation; the kind of "two busy musicians passing like ships in the night" kind of conversation. He mentioned that he had heard my CD called "Blood Pressure" and was impressed. I was really touched by the compliment. Since I was just starting to develop the jazztruth blog, I thought that Burno would make a great interview; indeed, he is the kind of musician I'm truly interested in- ones who are amazingly talented and virtuous and yet for some reason stay off the radar for years. I'm really happy I was able to get this interview for my blog; Burno had a LOT to say on many subjects, so I broke it into Part I and Part II, respectively. It's really quite deep and Burno speaks with absolute candor, to say the least.

The news of Dwayne Burno's sudden death on December 28th has sent shockwaves throughout the Jazz community. Dwayne was way too young to pass like this. It's sad to know that you'll never get to speak with or play music with someone ever again. My heart goes out to his wife and son. I'm particularly saddened and  frustrated with the fact that Burno apparently stockpiled original music and never recorded a CD as a leader. I'm not really sure why at least a small label, if not a larger one, would not have ever approached him, or why they never asked him to do something? It can't be because he never met anyone in the Jazz recording industry? I mean, he played with Betty Carter, Roy Haynes, Donald Harrison, Freddie Hubbard, Benny Golson, and so many more. I suppose that's what makes the video that accompanies the site where you can donate to Burno's family all the more totally heartbreaking; Dwayne was finally going to do a recording, and was starting a Kickstarter campaign.

Although Burno's death is a real tragedy for his family and for the Jazz community, I'm learning something from it. I'm going to appreciate the things I have and the people I know and the time I have on this Earth. I'm going to strive to be a better musician. ( I still have Mp3s Dwayne gave me that I haven't listened to- a ton of Duke Pearson....)I leave you with some clips of Mr. Burno. I'm sorry, Dwayne, that we didn't get to play at least one more gig together. R.I.P.