I heard a fantastic concert last night at Jimmy Mak's in Portland; Pianist Orrin Evans brought the house down with his amazing trio which featured bassist Eric Revis and drummer Donald Edwards.  Although for a Monday night in Portland, the turnout was good, but I think it should have been better. Here's the 8 reasons I think you should have been there:

1. Orrin Evans is one of the best jazz pianists out there, he's from the Philadelphia tradition, and he played his butt off last night. I've always liked the way he thinks about music. He had a well thought out and varied program, from a beautifully swinging version of "I Want To Be Happy" to some rather free music, to a hip tune based on Cherokee, to a Bill McHenry tune? Wow, that was unexpected. (Actually I recorded one of McHenry's tunes years ago. He's a somewhat obscure saxophonist on the New York scene.)Evans also surprised everyone with a vocal tune; I think he should keep singing.

2. The rhythm section: Eric Revis is a highly in demand and experienced sideman; I've heard him with Betty Carter and Branford Marsalis. He pulls hard and has a solid foundation, but can stretch when necessary. I've known Donald Edwards for many years; we've recorded and toured together in my group, his group, and many other groups as well. He's one of the best drummers in jazz; at times, I was more focused on him than anything else( although I actually just tend to focus on the drums more than anything. Probably why I should have been a drummer....).

3. The overall sound of the trio was really balanced and the conversation amongst the musicians was a marvel to watch and hear. Evans and company sound like a band. We don't have many groups in Portland playing creative music on this level. I think this would have been an education for some of my PSU students.

4. You missed a great Jazz Conversation where Darrell Grant interviewed Evans. Mr. Evans talked about being from Philly(although he actually spent his early years in Trenton, New Jersey) and all the masters like Shirley Scott, Bootsie Barnes, and Trudy Pitts that he was able to learn from. It's cool to hear the backstory. I'm determined to interview Evans for jazztruth.

5. You missed Orrin inviting ME to sit in and trade choruses on a rousing rendition of Mulgrew Miller's blues tune entitled "The 11th Hour." Evans called me to the bandstand. I had my trumpet, but what ended up happening was he played a chorus, got up from the piano, then I got on the piano and played a chorus. I never really did that before, and it was a thrill. It's also good cardio work! We did that for about 20 repetitions. After that, I stayed on the piano and Evans invited Jeff Baker to sit in on a ballad version of "It Could Happen To You." Evans has a lot of class.

6. Monday night is actually the best night to go hear music, because the Pearl isn't filled with yuppies who are partying for the weekend. You'll find parking quicker and it will be less traffic getting there.

8. There's really nothing like a live concert to gain eternal inspiration. I love listening to recordings and watching concerts on youtube. Sure, that's way more economical, and easier to study than one concert. However, when you are really in the moment with a great band, it can really leave an impression that will last forever. I fondly remember many of the concerts I've been to over the years; not necessarily EXACTLY what music was played, but the energy and the sound. Live concerts are vital to the survival of jazz. If you are a PSU student, you need to get out and hear and support the music. I know times are tight, but hey, maybe spend less on beer and weed that week and you'll be ok. 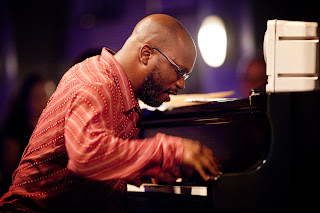 Evans has 20 recordings out as a leader on various labels. The latest is " ...It Was Beauty" on the Criss Cross label, and it features the same trio.
You can also check out his previous recordings at his website.