I'm noticing more and more that, on many of the international so-called jazz festivals, there is an alarming lack of jazz being booked. Now, I'm not a purist, and I'm not here to get on a soapbox about "the tradition" and "swing" and so forth. However, I think it's just illogical to call something a Jazz Festival and then refuse to book anything even remotely related to jazz. I don't know, I guess Eric Clapton is related to jazz by the fact that he's a blues guitarist? But when you have Lionel Richie and the Wu Tang Clan as headliners for major JAZZ festivals, then I think it is at least worth questioning. Let's put it this way: If there was a hip-hop festival, you wouldn't see Bucky Pizzarelli as the headliner! You wouldn't see Junior Mance at a rock festival! So why is everything besides jazz squeezing out the music for which these festivals are named after?

Obviously, some of the problem stems from the fact that jazz has always been a hybrid sort of music. Much like the way tofu takes on the flavors of whatever seasoning is around it, jazz can easily absorb new styles and approaches and it can still be called jazz. This is probably why there are so many sub-genres of jazz. And more than other styles of music with their own sub-genres, jazz has almost as many sub-genres as their are individual jazz musicians . Since we are all trying to "develop our own sound", this makes for jazz which always has the possibility of some new addition or subtraction to the recipe. Unfortunately, this makes for many misconceptions about the music.

Because it's so hard to define jazz in a "pure" sense, I think it's easier to lump other styles of music into the "jazz" bucket. For example, the whole Smooth Jazz phenomenon is confusing: the wonderful, talented, superbly-coiffed Kenny G is a great saxophonist in the category of Instrumental Pop (if there is such a category....how about Highly Sophisticated Elevator Music....). But judging from what I hear at the dentist office, his "music" is not very jazzy to me. But because of the " Smooth Jazz" label, it gets thrown into the public's consciousness as some form of "jazz". However, David Sanborn, who might also not be considered a jazz musician by many, to me sounds much more like jazz than much of the Smooth Jazz that accidentally permeates my ear canal while I wait for my prescription at Shoppers Mart.

I think it's ironic that some of those supposedly smooth jazz musicians don't even consider themselves to be that. I was on a recording date recently where Kirk Whalum was a special guest. He was a super nice guy, and he confided that he considered himself a " R&B and Gospel saxophone player." He also talked a bit about the "powers-that-be" of Smooth Jazz Radio, consisting of a panel of judges who decided whether or not one's music was "smooth" enough to play on the radio. "I'm considered a smooth jazz player," Whalum testified," but now it's become so controlled, that even I'm considered too jazzy to be on the smooth jazz format!"

Many discussions have endured regarding the name "jazz", by critics and fans and musicians alike, since the beginnings of the music. Originally spelled "jass" some say it comes from an African word, others speculate that it comes from the French jaser ( to chatter). Some say it refers to the sex act in various ways. Apparently the first evidence of the word comes from a newspaper article about baseball, in which the columnist used jazz as a synonym for "energy" or "pep". In fact, one early contest was held to "rename" jazz, the winner being "syncopep" which thankfully never caught on as a new word to replace jazz.

Often I am asked about my profession. " I am a musician, " I say. After the required "Are you in a band?" they inevitably ask, " what kind of music?" "Jazz" I say, waiting for that confused look on their face. " Oh, I love jazz. Spyro Gyra is my favorite band...." or  "Have you heard the new Sade CD?", or
"My grandfather likes jazz." or just blank stare...." Do you want me to trim your sideburns?"

As the interest in jazz seems to be slipping from our grasp, I think it's time once again to consider renaming our old friend jazz. Perhaps it will have the re-branding effect which Madison Avenue marketers look for when they try to do P.R. for some big mega-company,which needs to re-make their image after it comes to light that they gunned down some of their employees during a wage strike.

How about RHYTHM MUSIC? or Rhythmic Music? Many jazz schools in Europe are now calling themselves Rhythmic Music Schools (There's at least one in Denmark).

Or Contemporary Improvisational Music? Too long? Too pretentious?

What about American Classical Music? Too "Jazz -At -Lincoln -Center-esque"?

What about Instrumental Improvisation? But then people will call it I I for short, and then you'll feel like your in the Navy or something. " What kind of music shall we hear?" " Aye, Aye, Captain....."

What about naming it after one of the greats? What about Gillespie Music? or Coltrane Music? Obviously that would spark a debate.

What about combine all the elements into one colorful word. jazzbopswingfunksoulbluesimprov.
It might come out as jaboswifunsblupov. And then jaboswulbov. And then jwapov. This is clearly not working!
Feel free to post your own ideas. And no profanity or euphemisms for sex. That's why we're in this predicament in the first place! 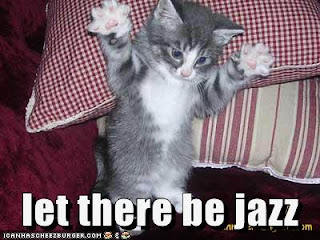